The Saga continues – here’s Part 1 and Part 2 if you’re joining in the middle.

On Day 3 we finally started the North Coast Trail. As I mentioned before, most people start with the North Coast Trail and continue on to Cape Scott, but because of some conflicts with the water taxi dates due to Covid-19, we decided to do the trail backwards. So instead of starting with a water taxi from Port Hardy to Shushartie Bay, we had already hiked 37km and we still 43km to go. We hiked from Guise Bay to Nissen Bight before lunch and then continued from Nissen to Laura Creek, our first section on the North Coast Trail.

From the end of Nissen Bight, it’s about 5km in the woods, followed by another kilometre along the beach to reach the campsite. Our feet were already aching from pounding across so many beaches, so it actually felt like a bit of a relief to start climbing up into the woods. There was a noticeable change to the conditions of the trail as soon as we entered the forest. It started with a steep climb up towards Nahwitti Cone and then it was 5km of poorly maintained trail and mud. 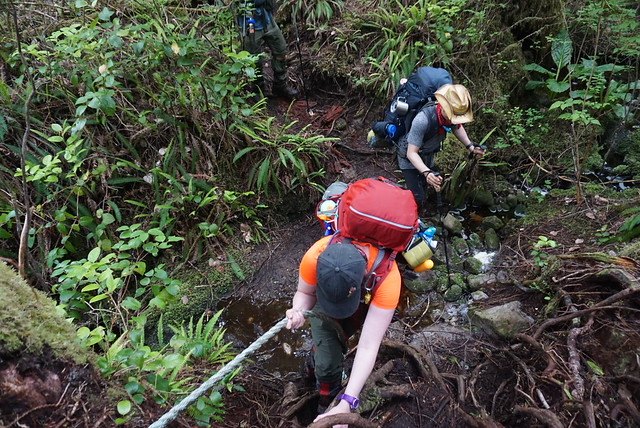 The North Coast Trail is a pretty bare bones trail, besides keeping the brush at bay, it seems that the trail is left pretty wild and it makes for a very technical hike. There’s a lot of mud to navigate around as well as tons of obstacles from the trees. You’re constantly climbing up and over logs, under branches, and jumping your way around mud pits. The Juan de Fuca was a similar experience for me and Emily, so we didn’t come across anything unexpected, but we definitely forgot just how challenging and slow these kind of hikes can be.

At first the obstacles were a welcome distraction from our aching feet. When you put your brain to work navigating the obstacles, it does distract from your other pains, but the forest paths make for REALLY slow progress and eventually you just get frustrated at how long it takes to make any kind of progress. This was Lien’s first real challenge. He’d never been on a technical coastal trail before and so he really had no frame of reference for what it would be like. When we first switched our plans from Mount Assiniboine to the North Coast Trail, his first response was, “well at least it will be an easier trail!” We all laughed at him and informed him it would actually be a lot harder, but I can see where the misconception comes in and I have made the same assumption in the past. Mountain trails appear to be harder because of the large elevation gain, but coastal trails often still have a ton of elevation gain hidden among the relentless up and down along the coastline, as well as they’re usually a lot more technical. 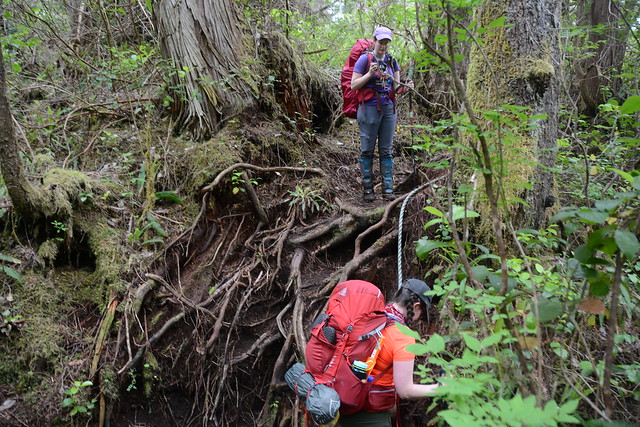 There was a marked difference on Day 3 though in that we barely saw any people. We’d started hiking Cape Scott on the weekend, so it had been crawling with people, but it was now Tuesday and so even on our hike to Nissen Bight we didn’t see many people. After Nissen the trail really emptied out. We saw one hiker just as we were starting the climb to Laura Creek – he was returning from an overnight at Irony Creek (that’s a 19km hike!). After that the only other people we saw was one group of guys who were camping at Nissen and had day hiked out to Laura Creek and back. In mine and Emily’s opinion, it’s a waste of time trying to avoid the mud on a trail like the NCT, so we were both pretty muddy and had wet feet by the end of the day. We had wet feet the entire 4 days we hiked the Juan de Fuca, so in our opinion keeping our feet dry until Day 3 had been a pretty big success. But when we passed the guys coming back from Laura Creek and saw their completely mudless legs and boots, we had to conclude that they were clearly witches to stay so dry.

Lien struggled along this section, mostly from the repetitive uphill sections. I started stronger along the wooded stretch, but eventually it really got to me too. I was tracking the hike along my GPS and every 30-60 minutes I’d check in to see how much progress we were making and it was always a mistake. Your location barely moves and it really only serves to de-motivate you. What was more depressing was that I’d read in the trail book that this was one of the easier wooded sections of the trail, so it made me really apprehensive about what was to come later. So much of making it through these long hikes is mental and often you just have to focus on making it through one part at a time. 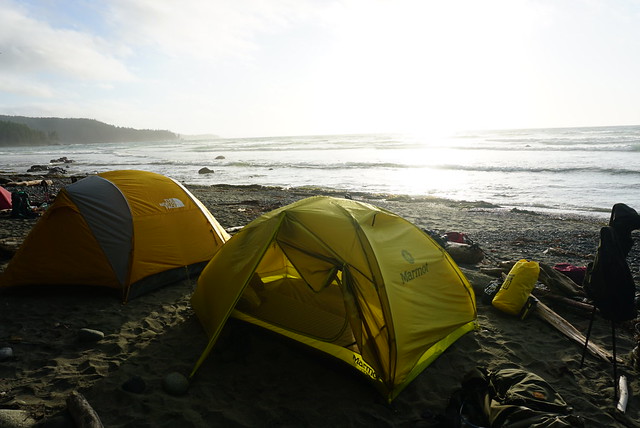 Unlike the rest of us though, Day 3 was where Emily peaked. She had a rough Day 2, but she was in her element on this section. Despite her blistered feet, she was our cheerleader for the day and led us through the worst of it. One of the real saving graces of having 4 people in your group is that we didn’t all fall apart at the same time. There was always someone who was struggling, but when that happened, someone else would always step up to help motivate the group. The constant uphill was Lien’s mental block for the day, so we all cheered when we finally started heading downhill in earnest and could see the beach peaking out through the trees. We still had 1 more kilometre to go across the beach, which is it’s own kind of hell at the end of a long day, but at least you make a faster pace.

There was some confusion about where the water source was, so we spent a bit of time poking around for it at the end of the beach, before a closer read revealed that it was actually located right at the campsite. I’d read Laura Creek only had 4 tent pads, so despite seeing no one else on the trail, I was still a little concerned about availability. Me and Emily were anxious to get off our weary feet, so we took off towards the campsite. Fortunately there was only 1 other group of 5 guys at the campsite and they were only using 2 of the tent pads, so there were 2 more left for us. 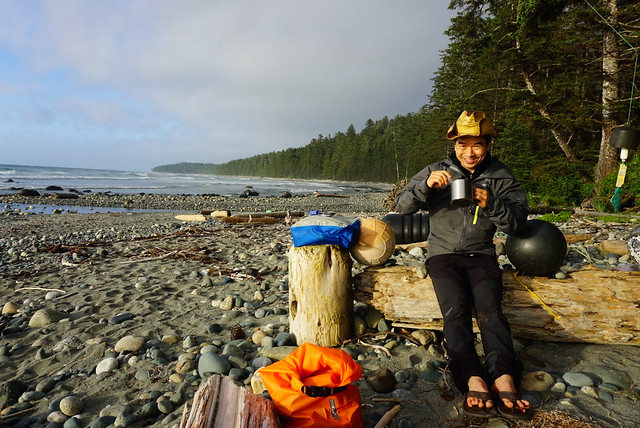 I have to admit, as relieved as I was to sit down, the tent pads were a little gloomy after the beautiful campsite the previous night. The trees were extremely thick and didn’t let a lot of light in, plus everything felt damp. Fortunately Brandon is much more determined than me or Emily and when he showed up, he dropped off his backpack and declared there was no way we were camping in the woods and he would find us a spot on the beach.

There’s no where to camp on the beach near the tent pads because it’s a steep cobble beach, but if you continue another 200m to the water source, Laura Creek, there’s a small sandy beach with enough room for 3 tents. There was one couple set up there already and they kindly moved their tent to the side so that we could set up our two tents next to them. It was extremely windy, but a definite improvement over the wooded tent pads! So much thanks to Brandon for that!

We put up the tents as fast as we could and chucked all our gear inside to keep them from blowing away. We changed right away because it was cool with the wind in our sweaty clothes. Once I bundled up with a few layers though, I forgot about the wind and was thrilled when the sun finally came out for the first time since we’d started the trail! 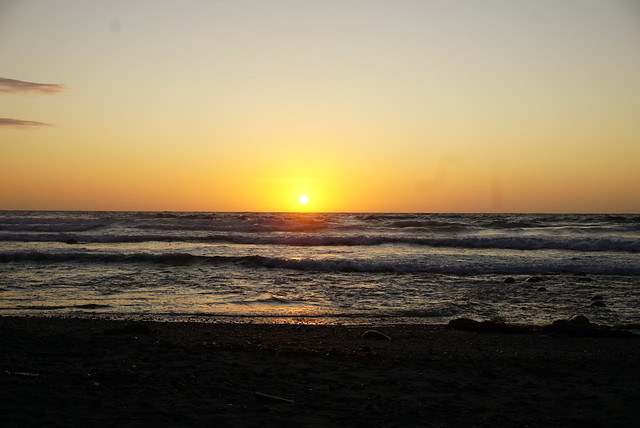 The weather on these trails really is wild – it’d been overcast most of the day, but within a half hour the wind completely blew the clouds away and we found ourselves with a gorgeous sunny beach view – so that helped with the chill as well. It was somewhere around 7pm at this point. It ended up taking us about 4 hours to go the 6km from Nissen to Laura, so we knew we were in for some longer days.

By Day 3 we’d started to get into a bit of a routine. Lien got water from the creek to start filtering, Brandon started working on getting a fire going, and me and Emily started boiling water for hot drinks/soup and started making dinner. Emily was the chef for day 3 and served us a cheesy pasta that we’d made from a backpacking website. It was vegan so it used coconut milk powder and nutritional yeast to get the creamy cheesy flavour – it was my first time using either ingredient and it was actually pretty good.

The only downside to our beach campsite was that it was a 200m walk back to the outhouse and bear cache, but definitely still worth it and we ended up having a great night relaxing on the beach by our fire. Laura Creek definitely had the best sunset of the trip; when the clouds cleared out we had an excellent view of the sun as it dipped below the horizon and filled the sky with its orange-yellow glow. We were zonked from the long hike, but relieved that our biggest day was now behind us. Over the next 3 days we’d be averaging about 12km a day, so we were optimistic that though the hiking wouldn’t get easier, the days would at least get shorter. It was an incorrect assumption, but more on that in the next entry, Part IV! 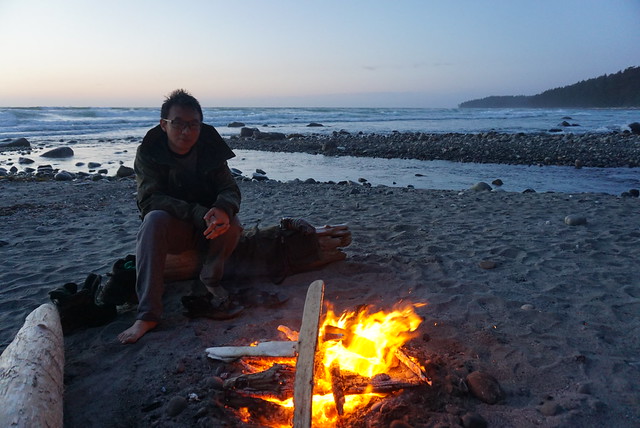