Since I just wrote about the bike trip I took with Girl Guides, I figured I’d continue the trend by writing about a backpacking trip I did in September 2019 to Elfin Lakes. I wrote this post almost right after the trip, but I never got around to posting it, so with the changing of the seasons (foreshadowing), I thought it was finally time! This was my most recent trip to Elfin Lakes, but I’ve been 3 other times, all of which were very different experiences. Read about my Fall day hike, summer tenting trip, and winter snow camping experience for my stories about the trail. 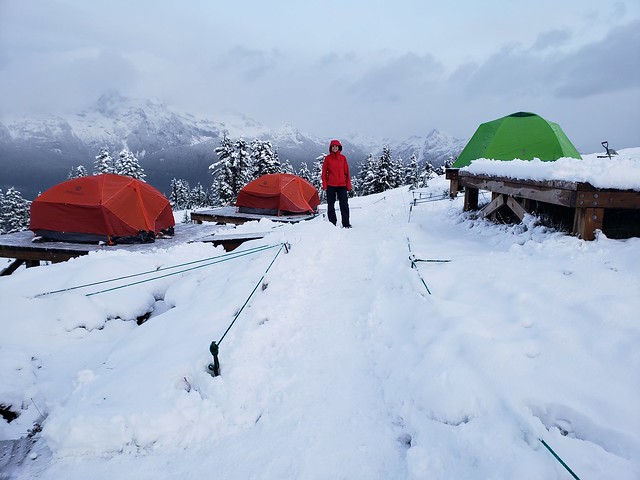 I’ve been wanting to take my Pathfinder group into the wilderness, but you need previous experience on backcountry trips with girls before you can lead your own, so I jumped at the opportunity to join the North Vancouver Trex group on this trip. It was only my second trip into the backcountry with Girl Guides, but for some reason I always seem to encounter the craziest weather on guide trips, and this one was no exception!

We were a group of 12 and we planned to hike up to Elfin Lakes on Friday, tent for 2 nights – day hiking to Opal Cone on Saturday – and then hiking back down on Sunday. Needless to say, things did not go quite as planned. We do our best to be prepared as girl guides. The forecast was calling for rain on Friday and temps down to -8 degrees celsius overnight, so we packed lots of rain gear and warm clothes for sleeping. However, the temperature ended up dropping a lot faster than we expected and the rain started to turn to snow just before we reached Red Heather Hut, which is almost the halfway point up to the lakes. 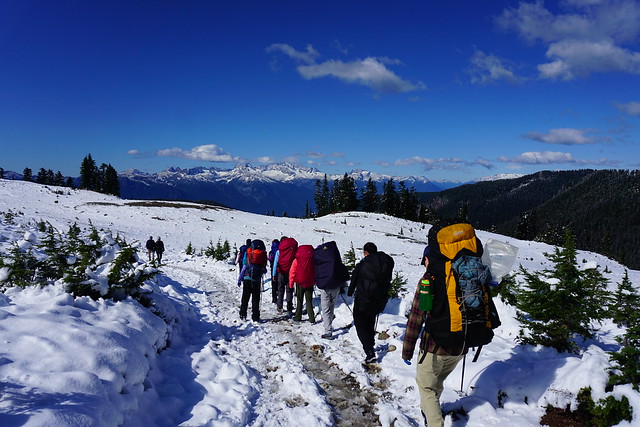 The girls were thrilled about the snow, which was falling gently, and I have to admit, hiking in the snow is a lot nicer than hiking in the rain. We had hot noodle soup for lunch before continuing on to the lakes. It was still September at this point and it was obvious it was the first snowfall of the year. However, the snow started to accumulate pretty quickly and it started snowing heavier as we continued on from the hut. Fortunately, there was no wind, but visibility wasn’t great and we couldn’t see any of the views on the way up. I admit, the further we hiked, the more apprehensive I got.

I wasn’t really nervous about camping in the snow, because I have done that before and we had brought really warm gear, but we didn’t have snow boots or snow pants and it was increasingly obvious we weren’t going to be able to hike to Opal Cone the following day. Even though it was calling for sun and blue skies on Saturday and Sunday, there was too much snow to hike further without proper footwear. But we just focused on getting to the hut and the girls did really well managing the conditions. Fortunately no one got cold or wet feet on the way up! 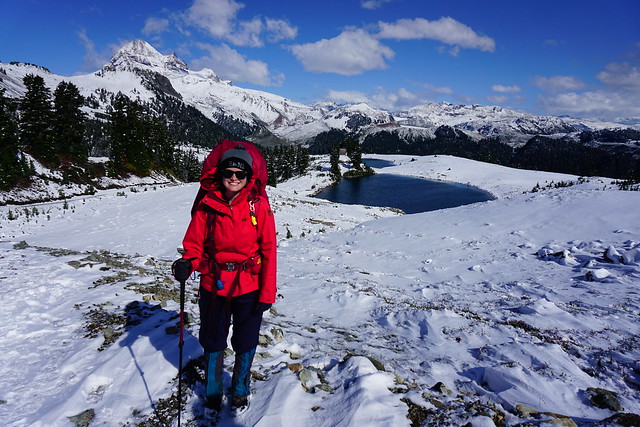 We hit the hut around 4pm and everyone was thrilled to go inside. I think the girls were thinking we were going to abandon the tenting idea and just sleep in the hut, but as we had only booked tent pads and there were 12 of us, that wasn’t really an option (although obviously in an emergency we would have camped out on the floor if we had to.) We made them hot drinks to warm up and everyone hung their wet gear by the fire. I have to say, the girls had a great attitude when we told them we were still planning to camp. The snow did start to slack off and was almost stopped when we went back outside an hour later to scope out the tent pads. Fortunately the clouds had started to lift and you could just start to see the surrounding mountains (which are incredibly striking from the tent pads at Elfin Lakes), so the girls started to get excited again about tenting.

We shoveled off the tent pads and set up 4 tents. This proved to be a bit more of a challenge than we anticipated because it was pretty darn windy when we were setting them up. We had to weigh them down with rocks and then shove all our gear inside them to hold them down. Then we had the added difficultly that we couldn’t peg them because of the tent pad, but we eventually managed to get them set up and soon after that the wind died down and I didn’t give it much more thought. 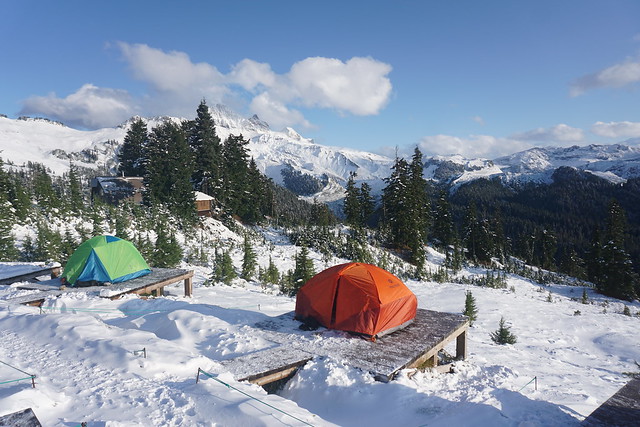 By the time we finished it had really cleared off and we had fun getting some photos of the mountains and the tents. Time really got away from us with the weather though and it was 8pm before we finally had supper in the hut. We had pesto pasta and re-hydrated coleslaw for dinner, with 2 bite brownies and reese peanut butter cups for dessert. After that we pretty much hit the sack because we were all exhausted. Unfortunately we decided we couldn’t stay for a second night because it just wouldn’t be safe to hike to Opal Cone and the girls didn’t have the appropriate gear to play in the snow, so it made the most sense to just hike back out on Saturday. The girls took the news pretty well and were very understanding.

I stayed up to get some star photos and then nestled into my sleeping bag for the night. It was pretty calm when we went to bed, so I thought that was the end of it, but oh was I ever wrong. Around 3 or 4am a wind storm blew in that totally put our tents to the test. I grew up in Newfoundland, which is super windy, but I never really did much tenting there, and not in recent years, so sadly I’ve kind of gotten used to tenting without wind. As a result, I never guy line my tent and only ever peg it really to protect from the rain. So it never really occurred to me to guy line the tents. It had occurred to the other leader though, but she had forgotten her rope, so she never brought it up (not realizing I always bring extra rope with me). 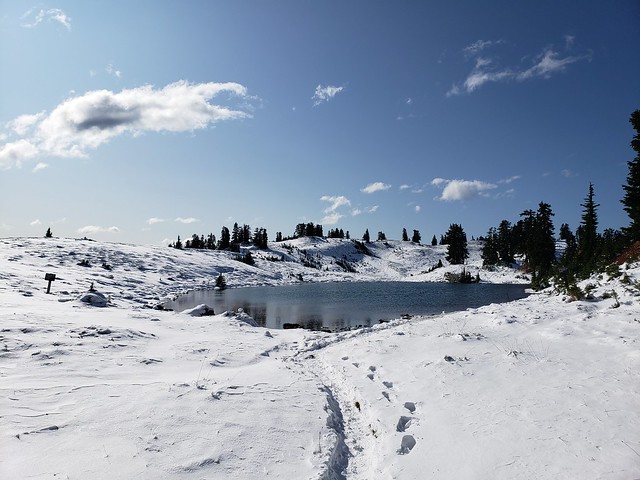 Anyways, I’m sure you see where this is going, but the wind was really strong. I’ve never tented in wind like that and it was totally billowing the tent in and out. It woke everyone up and the girls started freaking out a bit, but everyone’s tents looked fine, so we told them to go back to sleep. Then I was woken up again at 5:30am by one of the other Guiders when her tent collapsed on her and two girls. When we looked at the other two tents the girls were in, it really looked like they were going to collapse soon too. So we had to put the first tent back up and then I got my rope and we guylined them all to the tent pads. Somehow my tent was the only one that didn’t look close to collapsing, but we were in a slightly different area than the rest of the tents, so the wind may have been blowing slightly differently.

It was still super windy in the tent, but the guylines did the trick to prevent any more collapses and we were able to go back to sleep until 8am. The wind never really let up though and it battered us all morning when we tried to take the tents down as well. but it was a beautiful sunny day and the blue sky and fresh snow made for a really beautiful view. We had sunrise spuds for breakfast and then packed everything up again to head down. 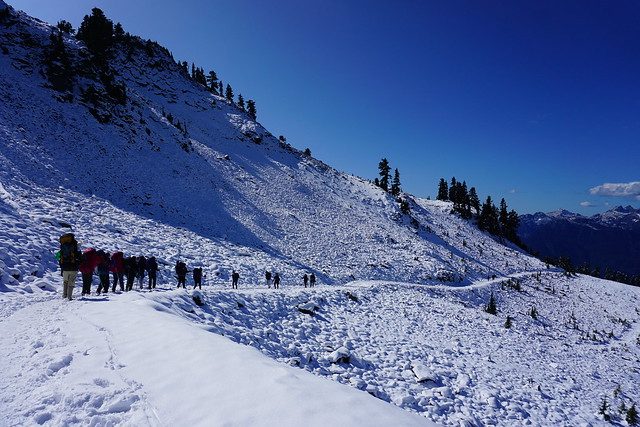 I was worried it was going to be super slippery on the way down and was concerned about not having spikes (my friend once broke her arm in similar conditions), but the snow was still fresh enough that it hadn’t been compacted into ice yet, so it wasn’t too bad. We had a little photo shoot on the ridge looking down on the lake and then hiked back to the Red Heather hut for lunch again.

We had one more spot of adventure on the way down. One of the girls rolled her ankle about a kilometre from the end, but fortunately it seemed to be only sprained and she was able to slowly walk the last little bit out. We divvied up some of her gear and strapped the rest of the pack to my front to carry it out and we all made it down to the parking lot in one piece!

With the exception of the first photo, all pictures were taken on Day 2! 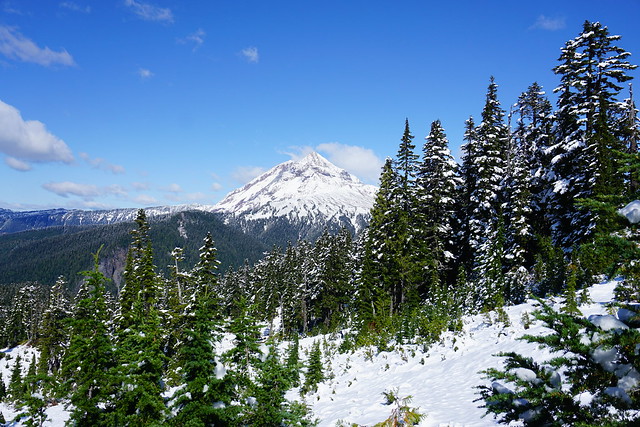