It’s been almost a year now since I visited the Rockies, but I never found time to post about the 2 hikes I did last August, so it’s time to feature them now! Hopefully it will be helpful if you’re planning to visit Banff this year. Sentinel Pass was my first hike in Banff National Park and I really feel like I started at the absolute best that Banff has to offer. Seriously, this hike was unreal! It’s not too challenging and it has the most amazing views – I loved every second of the day hike.

So first things first, let’s talk about how you get to the trailhead because it’s definitely worth talking about. Two of the most popular sights in Banff National Park are Lake Louise and Moraine Lake. Lake Louise tends to get most of the press attention, but for those in the know, Moraine Lake, located just up from Lake Louise, is the real shining jewel of the park. But if you want to experience it, you have to get there early. Lake Louise has a huge parking lot and on summer weekends it usually fills up by 8am. On week days you can probably get away with showing up by 10am, but likely it depends on the weather. I believe you can usually shuttle up to Lake Louise from the village or overflow parking lots, but the shuttles are currently not running because of Covid. 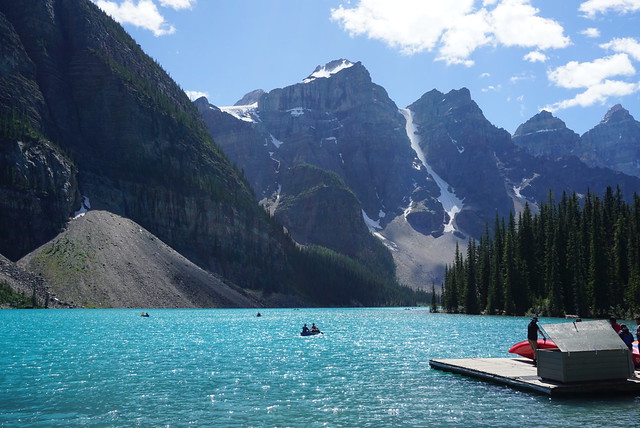 Moraine Lake is located 14km away from Lake Louise on a direct access road up to the lake. The parking lot for Moraine Lake is much much smaller and once it’s full for the morning, park staff will block off the access road to limit traffic up there. So you can’t bank on showing up late and just circling the parking lot – you won’t even be able to get up there. Same as Lake Louise, there is a shuttle bus that runs to the lake, but it’s not running this year. So if you want to visit the lake, your best bet is to come really early or really late. I read online that you need to be at the road by 6am to get a parking spot, which is probably true on a weekend, but we got in around 8am on a weekday. They will periodically open the road up again later in the day, but lucky timing is really everything if you decide to wait. 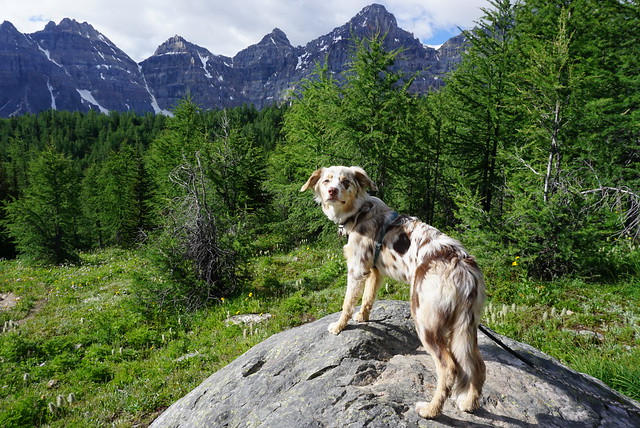 Once you make it to Moraine Lake, the world is your oyster! This is seriously one of the most beautiful alpine lakes that you can drive to. Canoeing is really popular on the lake – it’s first come first serve for bookings, but I suspect it’s probably not too difficult to rent this year with the limited traffic and shuttles not running. I would love to canoe up around the lake, but on our visit we had other priorities.

From the lake, there are tons of hikes to explore! The most popular trails seem to be the Rockpile Trail and the Moraine Lake Trail. Rockpile is located right at the parking lot and I regret not doing it because it’s pretty short and I imagine it gives you a great view of the lake. Moraine Lake Trail is about 3km long and goes up to the end of the lake. We had planned to do this trail at the end of our hike up Sentinel Pass, but ended up skipping it because Sadie was really tired. There’s several other trails leaving from the lake, but the other two main trails are Sentinel Pass and Eiffel Lake/Wenkchemna Pass. I’ve heard Wenkchemna Pass is also amazing because it hikes into the continental divide, but it’s a bit longer, so we opted for Sentinel, of which I have no regrets. 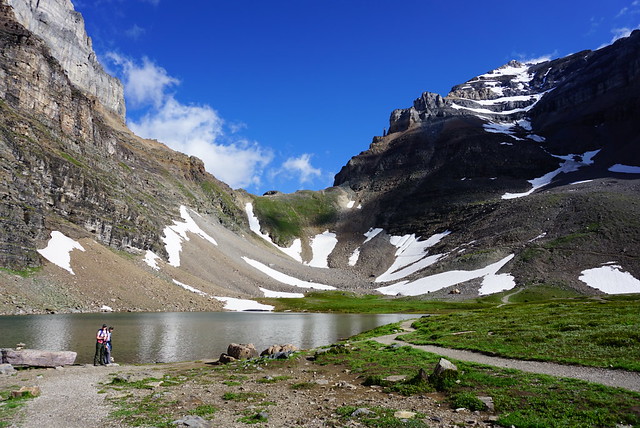 Sentinel Pass starts off with a climb up the mountain to get into the alpine. It’s steep, but nothing too crazy and the trail just switchbacks up and away from the lake. The advantage of starting early was that the temperature was still chill, so it wasn’t too bad climbing up there. After about an hour, you pop out of the woods into the alpine meadows, and from there the rest of the hike is super scenic. There’s some more climbing through the meadows before you come to a large meadow with two lakes, known as the Minnestimma Lakes, and the most amazing view looking back at the ten peaks surrounding Moraine Lake. It was especially beautiful when we visited in early August because the meadows were filled with wildflowers! I have a real weakness for meadows and wildflowers, they’re pretty much my favourite alpine scenery, so I was in hiking heaven. 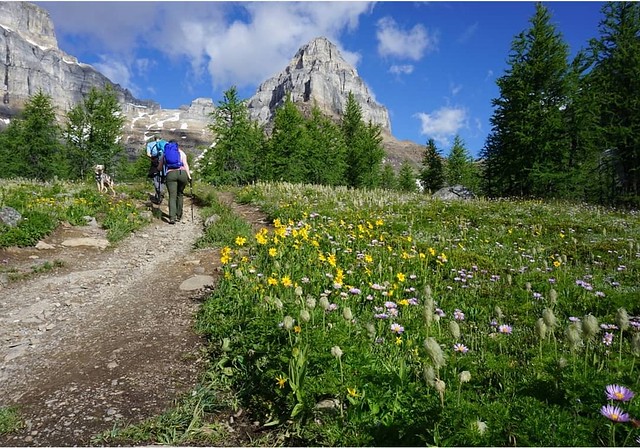 From the meadow, you can see that the trail continues up the side of the mountain and then switchbacks through the pass between Pinnacle Mountain and Mount Temple. This is where the hike gets a little more challenging. If you’re afraid of heights you might find this part a little scary, but I never felt unsafe on the trail at any point. There was still a little bit of snow left in one section, but it was easy enough to pass across. Watch for wildlife as you make your way through the meadows and up the final climb because we saw so much wildlife on this trail! The first meadows earlier on are filled with ground squirrels, and the higher meadows have tons of marmots! We could also hear lots of pika, which are harder to spot than the marmots, but we did spot one later in the day thanks to Seth’s determination. 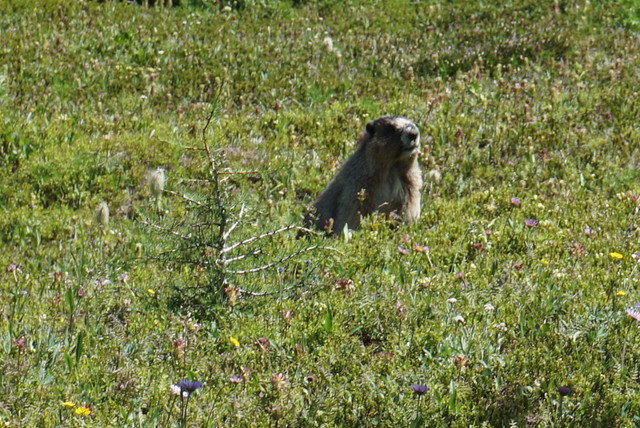 The view from the top of the pass is incredible, but honestly, so was the view from the meadow. It is worth pushing to the top of the pass to see down the other side, but if it’s too much, don’t sweat it, the views from the lakes are honestly just as good. It was pretty hot when we hiked the pass, but it gets chilly and windy at the top, so be prepared. It is possible to seek shelter while you eat lunch at the top, but we opted to just brave the wind so we could enjoy the views. 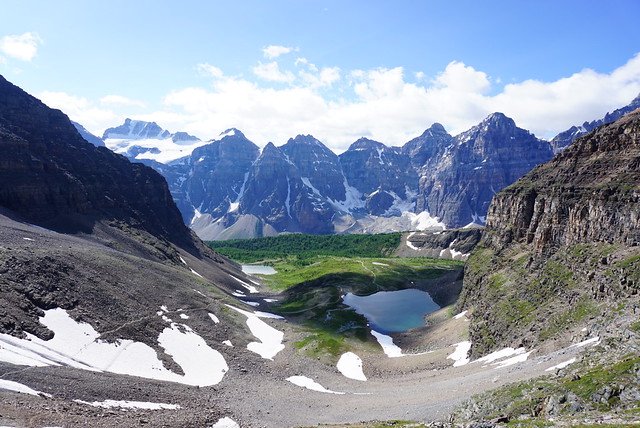 While we were on top, there were some other hikers coming up the pass from the other side. I could see a map for this trail on my GPS, but I wouldn’t recommend it unless you’re experienced. It’s hard to discern any path from the other side and you mostly just create your own path up the boulder field. The trail officially ends at the top of the pass, but we decided to explore a little bit further. There is an unofficial path up Mount Temple, but again, it’s more of a climbing path – it’s misleading how long it is to get up to the top of Mount Temple and I wouldn’t recommend doing it without a helmet. We just went about 100-200m further, snapped some photos, and then started to make our way back down the pass. 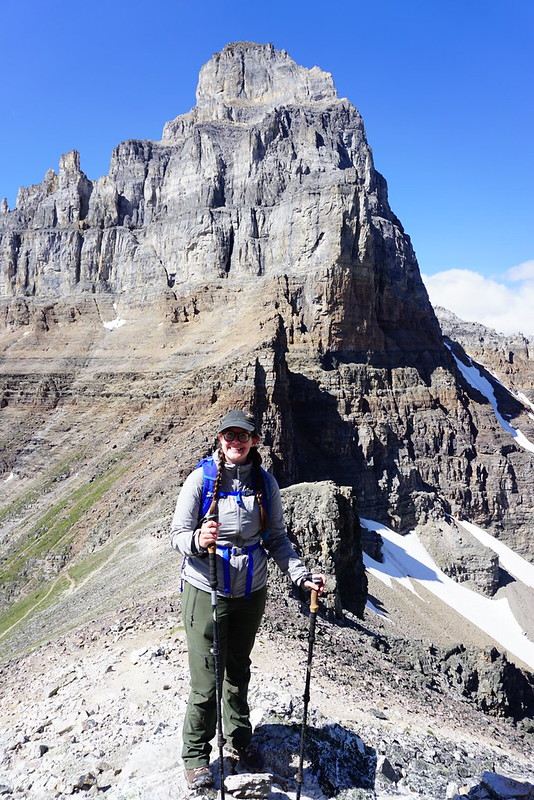 It was an early morning, but the trail was pretty empty, which made for a great hiking experience. There were definitely more people coming up when we were on our way down, but it never felt overly crowded. We took our time on the way down, enjoying all the beautiful views, taking pictures of the wildflowers, and looking for marmots. Sadie did well on the hike and had a great time, especially on the snow section, but after Banff we decided it was probably a bit too much for her, so we’ll probably wait a few more months before taking her on any more large hikes. Like I said, we wanted to do the Moraine Lake trail, but eventually abandoned the idea to give Sadie a rest.

So in conclusion, this was really an excellent hike. I would absolutely recommend taking the time to do it and know I’ll have to return again some day to do the Wenkchemna Pass hike and the rest of the trail around the lake! 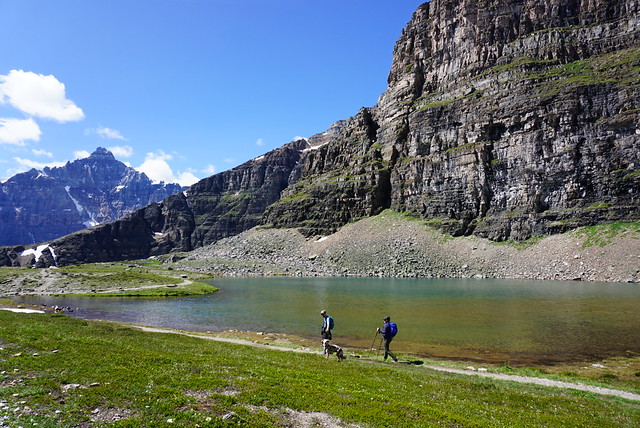 One thought on “Hiking Sentinel Pass”