Our second hike in Banff National Park in August was The Plain of 6 Glaciers (our first hike was Sentinel Pass). Both hikes are located in the Lake Louise area and I feel like maybe I should have branched out a little more, but they were both so incredibly scenic it’s hard to regret.

As I explained in my last post, with Lake Louise being so popular, it’s best to get there early if you want to be assured parking. I’ve heard the lot generally fills up by 8am, but I think that’s only on weekends because there was still lots of space when we got there at 8am on a Thursday. The Plain of 6 Glaciers starts right at the lake and hikes the length of the lake and up into the backcountry. I’d been to Lake Louise once before as a teenager with my parents and the lake was just as scenic as I remembered, but there were so many people so we didn’t want to linger. 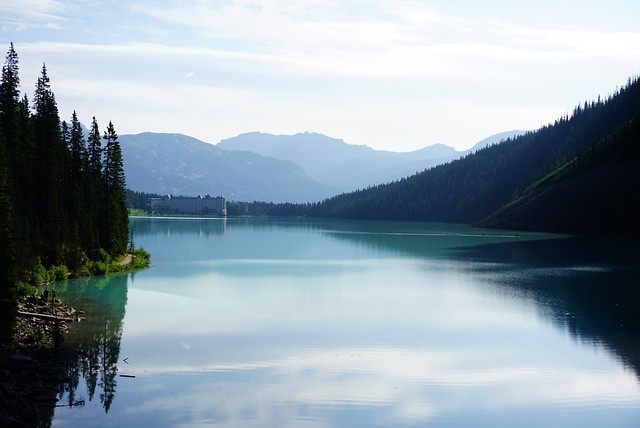 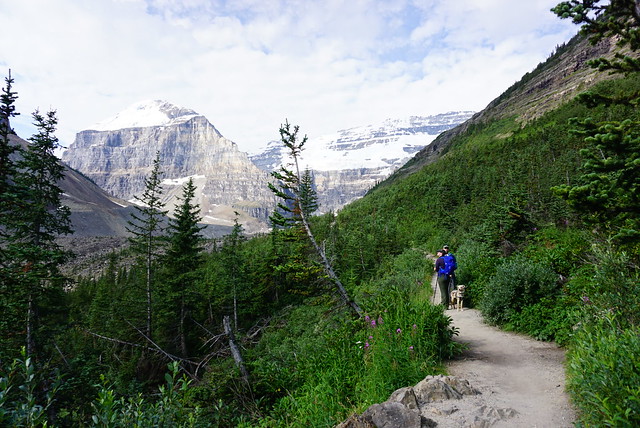 The weather was really nice. It was chilly, but the sun was out, so we slowly started ditching layers after leaving the lake. From there the trail is mostly uphill and continues through the woods and then into what I like to call the barren alpine. The entire valley was once covered in glaciers, so there’s not a whole lot growing there and it’s mostly rock left behind from the glaciers. There are beautiful views looking back at the lake as you ascend, as well as equally beautiful views looking ahead at the glaciers. It’s hard to count them to confirm if there actually are 6 glaciers, but they’re each slowly revealed to you as you hike up the valley. 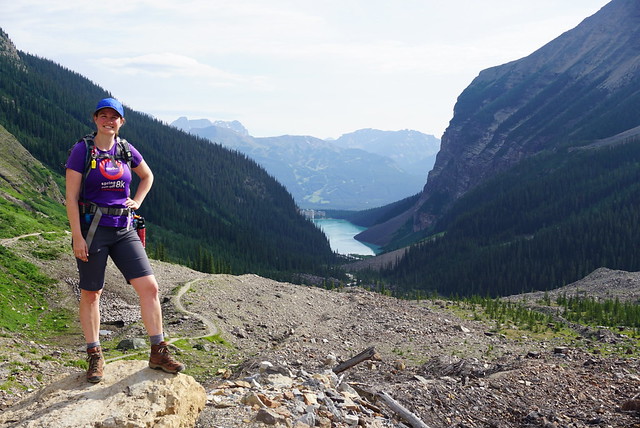 My favourite part of the hike is that there’s a cute little tea house located about a kilometre before the viewpoint. There’s a flatish area and they’ve constructed the teahouse and put some picnic tables along the river. We hadn’t really planned ahead properly for the teahouse because I thought I’d read somewhere that it was closed because of Covid, but it was open and fortunately Seth had $20 cash on hand. So we each had a cup of tea and shared a delicious jammy scone. We were thrilled to discover all the teas are from Banff Tea Co, which we had visited the day before, so me and Emily both had the “Plain of 6 Glaciers” tea in honour of the occasion. It’s an herbal tea with a little bit of mint and it was very yummy! 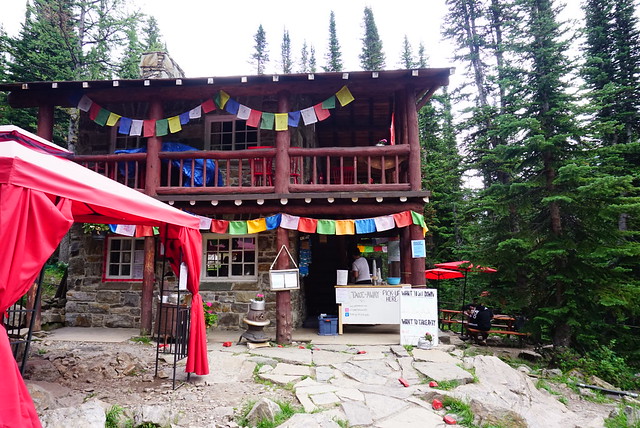 The weather started to change a bit while we were enjoying our teas. It had clouded in and while it wasn’t raining, the sky was starting to look a little foreboding, so we decided to continue on. It’s just 1 more kilometre, the last part of which goes along the ridgeline and reveals the final glacier right at the back of the valley. It’s not really obvious where the trail ends, eventually it comes to a scree slope and I think you can continue on a little further, but we opted to stop there for our lunch. It did start to drizzle a little as we were eating, but nothing too bad. It just made us glad we had left early again because the weather did get worse and the crowds got larger, but for the most part we had enjoyed a scenic and empty hike up to the top. 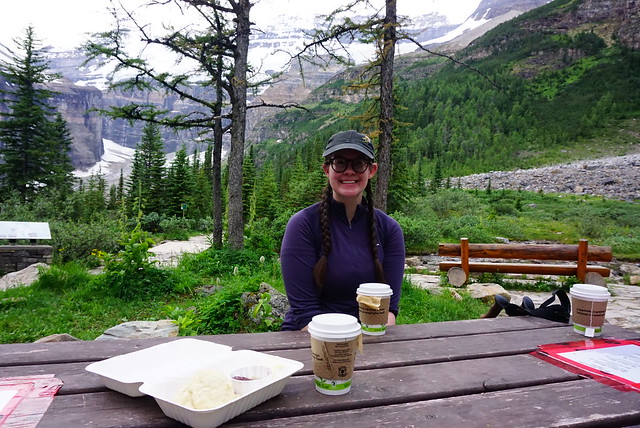 The rain picked up on the way down, making it colder, and the clouds quickly moved in to obscure some of the glaciers. I always find it amazing how quickly the weather can change in the backcountry and its a good reminder to always be prepared. Fortunately we had our rain jackets and merino wool sweaters, but we saw a lot of hikers coming up looking pretty wet and ill-prepared. 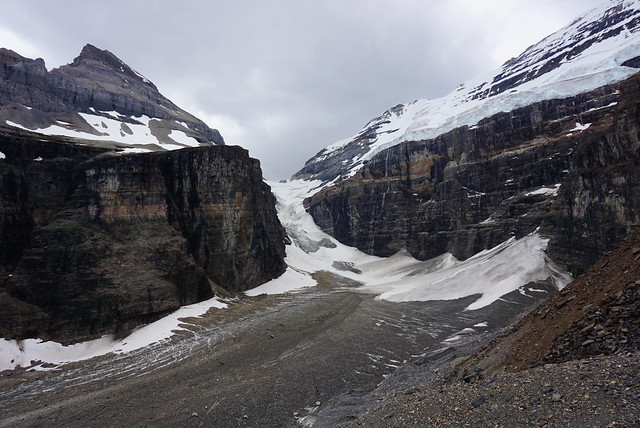 We beelined down the trail pretty fast because of the rain and made pretty good time coming down. It rained on and off for the rest of the hike, stopping for periods of time, but often starting up again. You can go back to Lake Louise via a different route that would take you to Agnes Lake and the other hiking trails, but similar to Sentinel Pass, Sadie was tired and we weren’t really interested in exploring too much more in the rain, so we opted to skip it. It was even more busy at the bottom of the lake as it was now mid afternoon, so we hightailed it out of there and back to our campsite to relax for the rest of the day. So overall, I didn’t like the hike as much as Sentinel Pass, but still very beautiful and I’d definitely go back and explore some of the many other hiking options in the area! 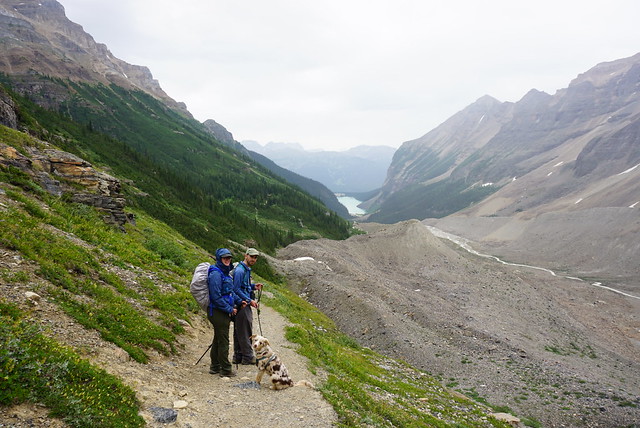 Out for a jaunt with @instagrant.ob
Am seriously obsessed with this hike! The entire 13km of trail are exposed and incredibly scenic - definitely one of my favourite sections. Now that I've finished it, I've now hiked everything from Cape St. Francis to La Manche!
Had a little self timer photoshoot on my camping trip with this pinky sunset ☺️
Setting up for the night in the birch forest! It was unbelievably warm for NL when we got up the next morning. The sun drove me out of the tent by 7am and I was in shorts and ready to hike just after 8am.