I feel like it’s a bit misleading to refer to this trip as a ‘backpacking trip’ – it was only a 30 minute drive from my house and 4km to get to the campsite – but I still lugged a backpack and all my gear out there with me, so it counts!

Like many other locals, I was thrilled to hear that the government would be relaxing some of their coronavirus measures and that BC Parks would be re-opening for camping. I was one of the many hopefuls trying to get campsites when they released on May 25, but alas, I had absolutely no luck, so I was left to research where I could go on a last minute permit.

I went to Viewpoint Beach, which is located in Golden Ears park, that first weekend in June after the campsites opened back up again. I had 2 goals. The first was just to get outside and go camping; I wasn’t too fussy on where as long as I had enough space to set up my tent. The second goal required a bit more thought – I wanted to take my puppy on her first ever camping trip. That’s right, I got a puppy! 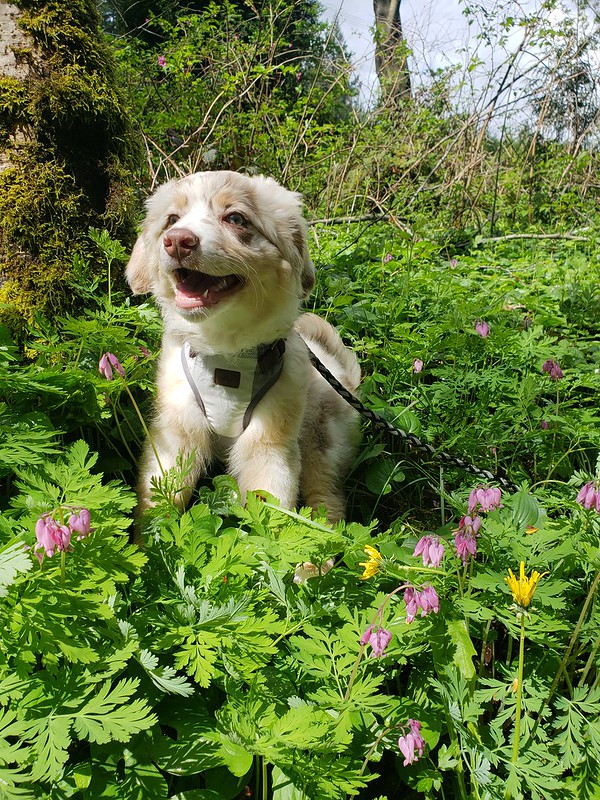 Seth and I have wanted a dog for a long time – like pretty much since we moved to BC – but of course a dog is a lot of work and we didn’t really have the space for one at our old apartment, nor were we ready to commit to the time constraints of a dog. But we recently bought our first home and getting a dog was pretty much our first priority when we got back from New Zealand. I know a lot of people have taken on pet ownership in the recent pandemic. We never intended to get a pandemic puppy, but I can’t deny that the timing worked out perfectly.

We’ve done a lot of dog sitting over the past few years, mostly for Jordie the Australian Shepherd and Alfie the Black Retriever. I love them both and was initially leaning towards getting a golden retriever, but after some research, we decided that a high strung Australian Shepherd was the perfect dog for us. Aussies have a bit of a reputation for being high energy and not great for beginners, but they’re also great hikers, so I was sold. We found a breeder in Keremeos and we were set. We picked out a little red merle puppy, named her Sadie, and brought her home at 8 weeks. 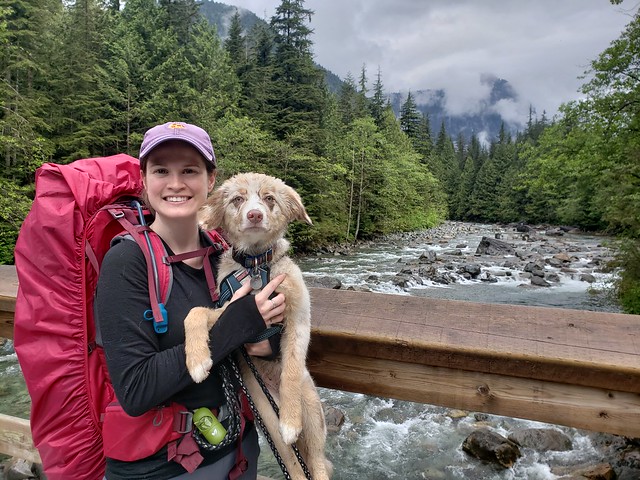 This was right around the time Coronavirus started to blow up (mid-march). The week before we picked her up we went pandemic shopping at the grocery store and I was so anxious to go get her because I could tell the climate was changing fast and I just wanted her home with us. We drove out to Keremeos on Friday night, picked her up Saturday morning, and then drove straight back home. She was so soft and precious. With the exception of vomiting a WHOPPING 4 TIMES, she slept in our arms almost the whole drive home. I took Monday off to stay home with her and by Tuesday, my work had announced we were going to a “work from home” protocol, so it was about 6 weeks later before we left her home alone for the first time. She’s a lucky pup – it was so much easier to be able to properly care for her as a puppy being home all the time, but it has resulted in a bit of separation anxiety (we think). Me and Seth are very much “her people”, but that’s a story for another time.

Anyways, back to the hike, what I’d intended to write about before going off on this life update. I really want for Sadie to be a hiking dog, but as a puppy, obviously she still has her limits, so I wanted something easy and close to home. We decided to try out Viewpoint Beach in Golden Ears. 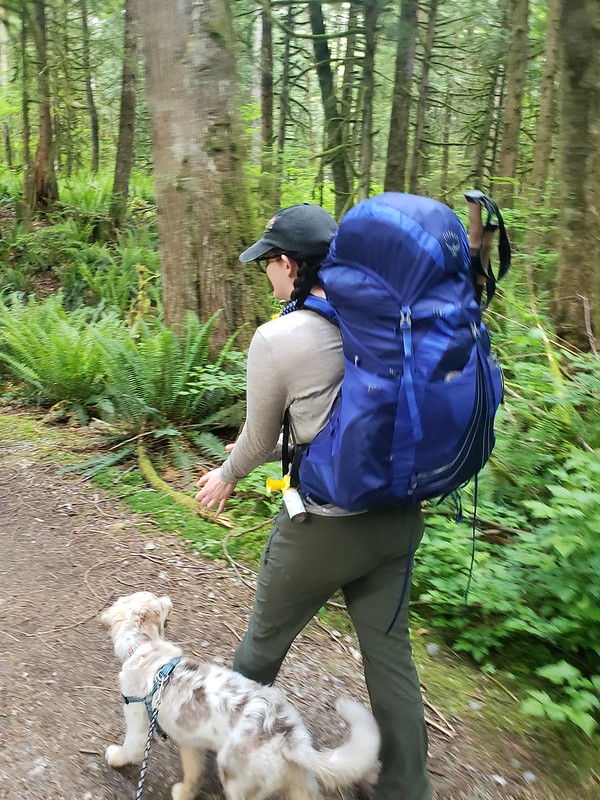 I did this hike once before about 5 years ago, so I kind of knew what to expect, but it seems BC Parks has put a lot of work into the trail since then, so it was a lot different than I remembered. They’ve updated a lot of the signage, upgraded the path to the lower falls, and the bridge that crosses over to Alder Flats (was there even a bridge here before? I always thought there was, but I’d hiked to both Viewpoint Beach and Alder Flats in the past and never saw one before). They’ve also added an outhouse at Viewpoint Beach, so it was more popular than I was anticipating for a rainy forecast, but there were still only 6 groups on the beach in total. Not bad for the first camping weekend after a 3 month quarantine.

Seth had to work on Saturday, so it was me and Emily that went on the hike. Emily lives on her own in North Van, so we kept her in our bubble throughout the pandemic. We picked up a Modo right after work on Friday and went straight to Golden Ears. We had sandwiches in the parking lot and then set off at around 6pm. Sadie’s been hiking around the tri-cities with us and has hiked up to about 8km to date, so I wasn’t too worried about the flat 4km hike to Viewpoint Beach. It’s always interesting to watch her though – this was our first time with backpacks and I think she could tell it was a slightly different experience than previous hikes. 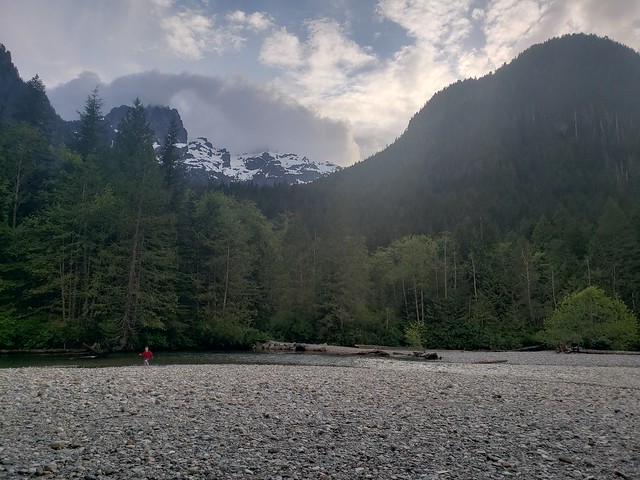 She’s a pretty high energy dog. She loves to be outside and if you don’t take her for a walk every day she’ll drive you crazy. It’s funny but even at 4.5 months old, she already has trail preferences. She doesn’t like wide gravel paths, I think she finds them a bit boring, and she seems to enjoy going up or down more than just going along a flat path. The more variety the better, so to date her favourite trails are actually mountain bike trails. We did a lot of exploring in the mountains up behind Port Moody during the pandemic, most of which are mountain bike paths, and she loves nothing more than running up and down those steep, technical trails. So I think I’ll have a pretty rugged hiking companion when she gets older.

It was a pretty easy hike to the beach, we knocked out almost 4.5km in just over an hour, which is actually pretty fast for us. Sadie did well on the hike, but the camping was definitely not without its challenges. Because everything was new, everything was very exciting and it was hard for her to settle down. At home when she gets hyper we just put her in her kennel for a little while and she calms down, but in the wilderness there’s no where to put her and she gets a bit anxious being on the line away from you. 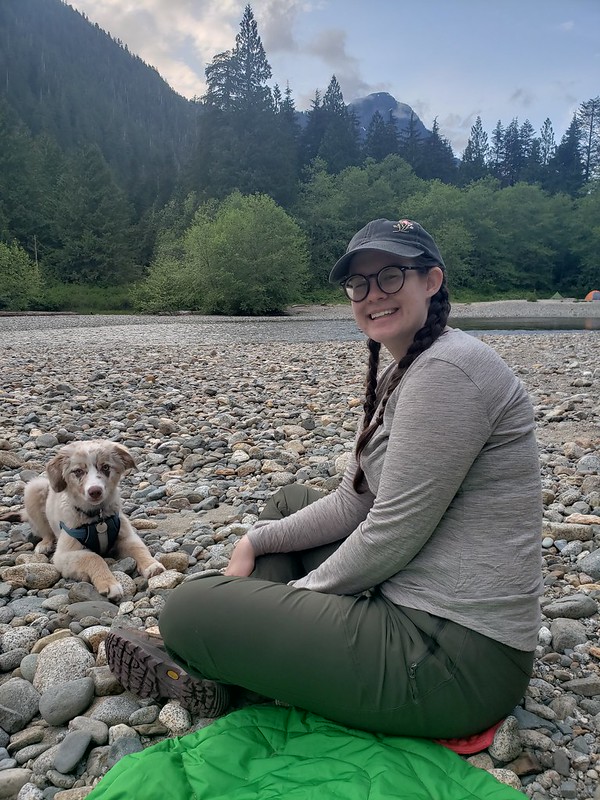 But we were able to get camp set up without too much difficulty. The forecast was calling for rain all weekend, starting around 9pm that night, so we wanted to get everything set up before that happened. There was no sign of rain when we arrived at the beach though. There was blue sky and we had a lovely view looking up at Golden Ears and the surrounding mountains. We set up a tarp for the next morning and a bear cache before settling down on the beach for some tea. Sadie went back and forth between trying to settle next to us and running around the beach chewing as many sticks as she could find.

I was really curious what she’d think about sleeping outside. Having down time was a challenge, but she ended up doing really well in the tent. I bought her a little backcountry dog bed from Ruffwear and she seemed to like it. She settled down there pretty easy and spent the night alternating between her bed and snuggling up between mine and Emily’s heads. I don’t know how much sleep she actually got, but she was quiet until 6am, which is when she normally gets up. 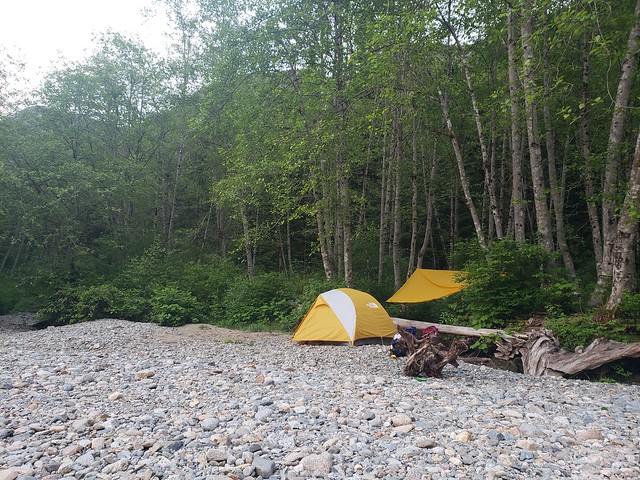 The rain held off for most of the night, but then it really started to pour around 3am. It wasn’t calling for that much rain, but it was coming down pretty heavy, so I wasn’t really looking forward to the next day. It still sounded like it was raining when I got out of the tent at 6:30am with Sadie, but I quickly discovered it was only the rain from the trees dripping on us and that the rain had actually stopped. So we didn’t end up needing the tarp, but rule number 1 of camping, if you prepare for the rain, it will pass you by, so always prepare!

We had a chill breakfast on the beach and the weather continued to improve, not enough for us to dry the tent or tarp out, but we were able to pack down in dry weather, so no complaints. Had we known the weather would improve, we would have stayed for the day, but since the forecast had been all rain, we hadn’t brought a lunch, so we packed up and hit the trail again by 9am. So we didn’t spend that long in the wilderness, but it was great to finally get out camping and I actually really liked the campsite. 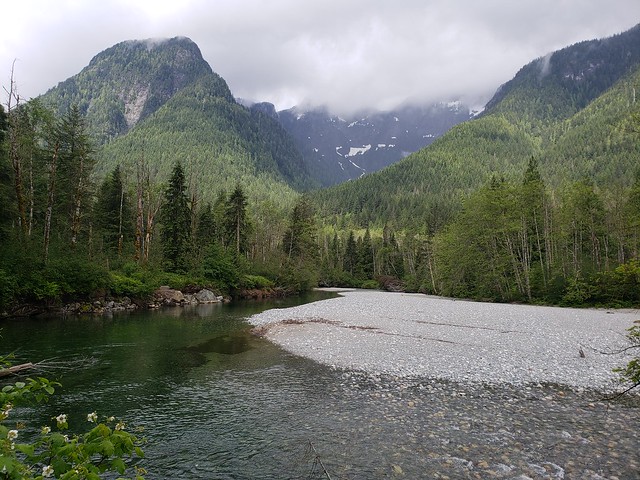 We had a lovely walk back to the car and decided to try the new (old, but better signed) trail to the lower falls. The first 20 metres of the trail is much improved, but after that it’s a pretty steep, technical hike down to the falls. Nothing we couldn’t handle and it ended up being Sadie’s favourite part of the trail of course.

It’s definitely going to be a very different summer with all the travel restrictions and extra precautions, but I’m so glad the parks have opened back up again because I think so many of us really rely on them to maintain our mental health. Can’t wait to get back on the trail again soon!