I haven’t written about many of my day hikes on this blog. I’ve gone on tons of them over the years, but I tend to write more about my backpacking trips since sometimes it seems like there’s not a whole lot to say about day hikes. But I’m excited to write about 3 Brothers Mountain and have decided to make it the first post in a mini-series about E.C. Manning Provincial Park. My first time visiting Manning Park was in 2016. Since then I’ve hiked and camped all over the park and it has become my favourite Provincial Park in BC to date. The first time I travelled there was with Emily when she was visiting from Newfoundland after finishing her Engineering degree. She stayed with me for about a month and we decided to spend one weekend car camping in the park. It was just the two of us and though it was the middle of July, it was a pretty cold weekend. I’ve had both hot and cold trips to Manning Park since then, but Emily seems to always be there for the cold ones, so I’m starting to think she might just be bad luck. 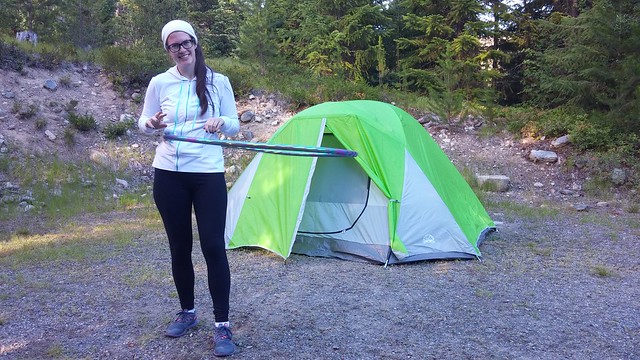 Anyways, after a cold night in the tent, we decided to hit the trail to try and burn some calories and warm up. It wasn’t very warm when we woke up, but as we started driving up Blackwell Road to get to the trailhead, the car thermometer kept dropping. By the time we reached the top, it was only 6 degrees. We hadn’t anticipated it would be so cold, so we grabbed all the sweaters and coats we had in the car and set off. It was a rough start when I realized I’d brought a camera with a empty SD slot, so I was forced to use my cell phone for photos. Probably not a big deal for most people, but I love my little mirrorless camera, so I was pretty bummed about it. You’ll have to excuse my photos for not quite being up to standard.

If you’ve never been up Blackwell Road, it’s worth going up there just for the view. You don’t even need to be a hiker. There’s an amazing viewpoint about halfway up and then another great view of the surrounding wilderness from the parking lot. If you have enough time for a short hike, follow the paintbrush trail, which does a short little loop near the parking lot and is covered with wildflowers (hence the name) around late July/early August. We had set our sights a little higher though and were aiming for 3 Brothers Mountain, a 21km out and back trip. The actual name of the trail is the Heather Trail and it continues on past 3 Brothers to Kicking Horse Camp and Nicomen Lake. I have also hiked that trail, but it’s a story for another time. 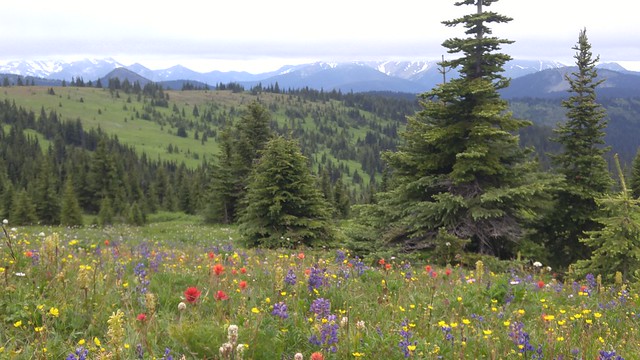 The Heather Trail and 3 Brothers Mountain are really top notch though. Because you’ve driven all the way up Blackwell Road, most of the elevation gain is done by car. That means the trail is already starting in the alpine, which makes the entire trip incredibly scenic. There is still almost 500m of elevation gain on the trail, but a lot of that is at the very end when you summit the First Brother Mountain, so spread over the rest of the 10km, the elevation gain is not bad at all. You start out on the ridge from the parking lot and descend about 5km to Buckhorn Camp. It’s a very quick 5km and we did it in about an hour. It’s a good place to stop for a pee break and a snack because there are several picnic tables and camping pads. I’ve never seen anyone camping there, but I could see it being a great campsite if you wanted to drive out after work on a Friday and get an early start on the Heather Trail in the morning. 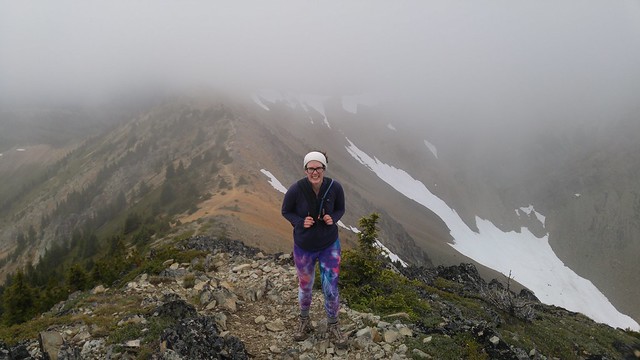 After Buckhorn Camp, the trail starts to climb again and that’s when things get truly scenic. The remainder of the trail is through alpine meadows and since we were visiting in mid July, the wildflowers were starting to come out. They weren’t quite at their full glory, but definitely picturesque. The only downside of course is that the Heather Trail is known for it’s wildflowers, so it attracts a lot of people at that time of year. Overall there’s a lot of trail to spread out over, but we were still regularly passing large groups of people that seemed to be doing Meetups at the trailhead. We were making a pretty brisk pace to try and stay warm, so we ended up passing a lot of people. But the trail is really beautiful as you look out over the green meadows and wildflowers out towards the North Cascades, so you can kill a lot of time taking photos! 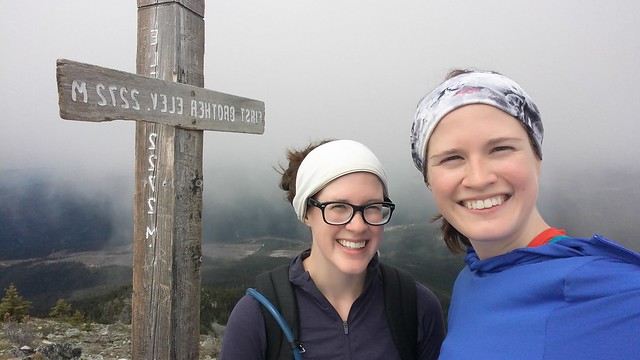 About 9km in you reach a junction – you can either continue on along the Heather Trail for another 11km to Nicomen Lake and beyond, or you can take the branch that leads up First Brother Mountain to the viewpoint and our final destination. The name 3 Brothers Mountain is somewhat confusing. I couldn’t find a whole lot of information about it, but from the Park website I learned that the alpine meadows used to be used for sheep grazing until 1931, when they created the 3 Brothers Mountain reserve, which included the 1st, 2nd, and 3rd Brother mountain peaks. It later became part of Manning Park in 1941. There’s the trail branch to go up the First Brother and the Heather Trail passes by the 2nd, 3rd, and 4th Brothers along the way. But don’t ask me what the deal is with the Fourth Brother and why he was excluded from the trail and park name because I really have no idea why. 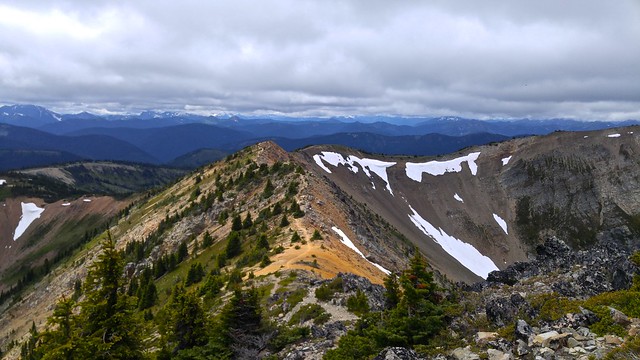 We were just aiming for the First Brother on our trip though. It was a pretty overcast day, so while we’d been able to enjoy the views on the way up, some of the higher mountains were still shrouded in fog – this included the First Brother. We branched off the trail and started climbing into the clouds, lamenting that it was both getting colder as we climbed and the view worse. We made it all the way to the signpost at the top of the mountain, but we couldn’t see anything from there and it was very cold and windy. We sheltered behind some rocks to eat our lunch, but while we were eating, the wind finally moved the fog out and the view started to clear for us! From the top you have an incredible 360 degree view in all directions. The climb up is not for the faint of heart – it is pretty steep, with lots of rocks to climb over as you make your way along the ridgeline with a drop on either side of you. It made for an incredible walk back down though! Everything we couldn’t see on the way up came into view on the way down and it took us a while to get back as we were constantly stopping for photos. 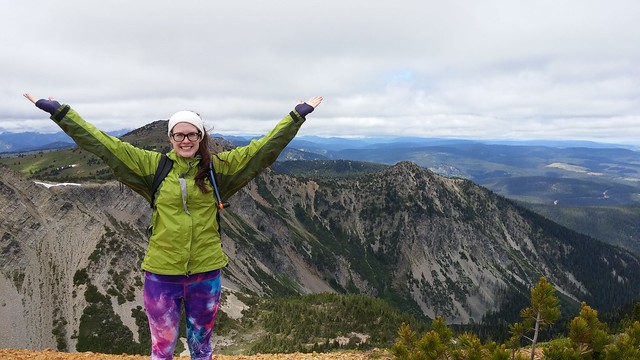 Even though this is a 21km hike, which I would normally expect to take a minimum of 7 hours, but more likely 8 or 9, somehow me and Emily did the whole thing in just 6 hours, including lunch break. This is a bad pace by which to measure other hikes because that is a super intense pace for us, but it does serve to highlight that the topography is definitely easier on this hike than others I’ve done (and that is was COLD). Please don’t use this as a reference for how long this hike takes though because another group of friends that I often hike with did the same hike in 10 hours. We ended up running into one of my friends on the way out. He’d spent the night at Kicking Horse and was heading back to the parking lot, so we did the last 6-7km together. He’d been planning to stay a second night, but he said it was just too cold up there to stay any longer. So we made good time on the way out and before we knew it we were back at our campsite again, building a campfire to warm ourselves up properly! 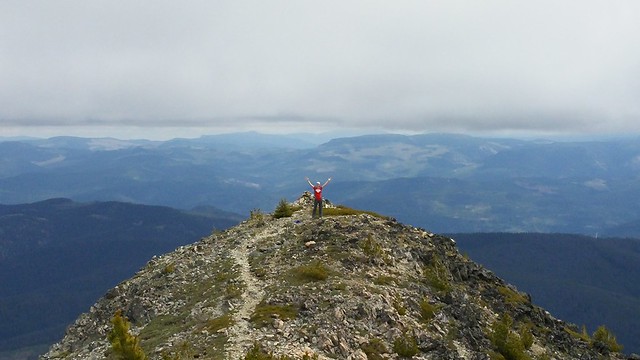 So my first visit to Manning Park was a little rough around the edges, but it was the start of a long and beautiful love story! That first visit inspired me to hike the Skyline II Trail a year later and the entire Heather Trail the year after that. We continue to car camp in the park annually and it’s become one of my favourite places to snowshoe in the winter. It’s a beautiful park, but it attracts less visitors than Garibaldi (I don’t actually know if this is true, but it definitely feels like it), so even though I love both parks, Manning makes for a more enjoyable experience. Plus the night sky in Manning is to die for! Tune back soon (hopefully), for more stories from my many adventures in Manning Park.