It’s been a while since my last post. Obviously the world has changed substantially since March 18th. It has been challenging to be confined to my home for the last 2 months, but I still have my job and my health, so taking a break from the outdoors is really a very small price to pay right now. We had to cancel several Girl Guide camps that we were planning for May, as well as I was planning to go on a May Long weekend backpacking trip with some friends. I currently have a trip booked to Mount Assiniboine for the first week of July that I’m not really convinced will go ahead, but I guess I can still hope.

In the meantime, I have literally dozens of backpacking trips and day hikes that I have never taken the time to write about, so I decided to kick things back off with a recount of my first time backpacking up to Lindeman Lake. I’ve posted about Lindeman Lake on my blog before because it’s a hike I’ve done many times. I think it’s a great introductory hike for beginner day hikers, as well as backpackers. Plus the snow melts pretty early in the season, so it’s one of the few hikes you can do from May onwards. The first time I backpacked up to Lindeman Lake was over the May Long weekend in 2017 and it ended up becoming an annual backpacking trip for me and my friends. The first year we went, it was just me, Carolyn, and Megan, her (at-the-time) new roommate and soon-to-be one of my good friends. 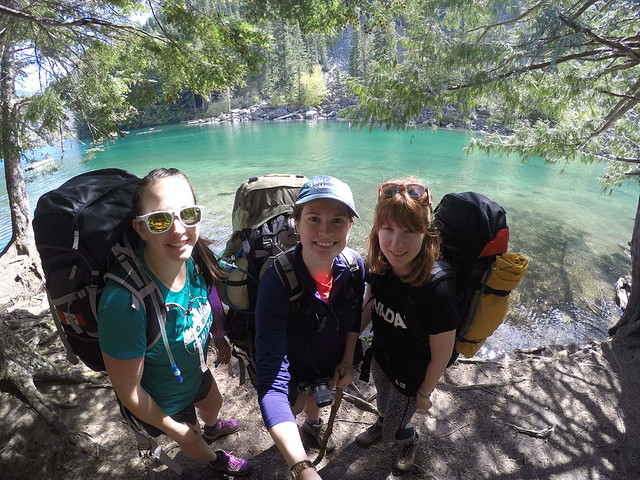 We picked it for all the reasons outlined above – it’s free of snow in May and at 3km, it’s a good start-of-season warm up hike. We decided to hike up on Saturday morning and stay 2 nights, day hiking up to Greendrop Lake on the second day. Lindeman Lake is located in Chilliwack Provincial Park, about 2 hours out of Vancouver at the end of Chilliwack Lake Road. There’s no cell service out there at all, so be prepared. You do need a backcountry pass if you plan to camp overnight in the park, but it’s only $5 per person for night, so it makes for a cheap trip. There’s no reservation system, so you don’t need to book in advance, but be prepared for a decent number of people at the lake for this reason. We camped there again on the long weekend in 2018 and both times we were able to find somewhere to pitch our tents (actually camped in the same spot both years), but the tent pads fill up fast, so be prepared for variable ground if you don’t head up early. There’s a number of good spots right at the edge of the lake, and more spots back along the river when you first walk up. I say “spots” and not “sites” because aside from the 4-5 tent pads, it’s really an open camping area, so it might not be the best location for this season as you have to be prepared for close neighbours. 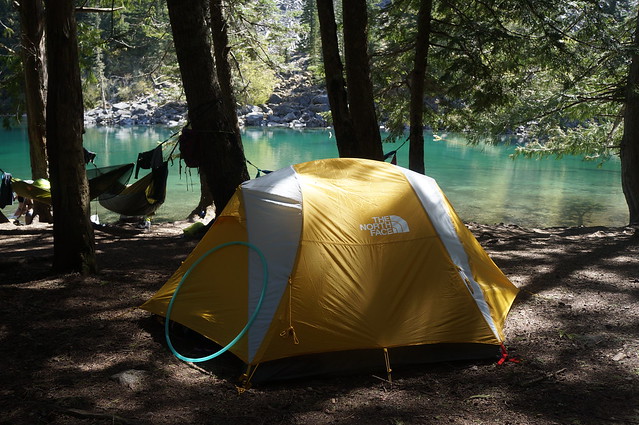 Lindeman Lake attracts a lot of visitors because the entire round trip trail is only about 3.5km – but beware, with almost 400m in elevation gain, it is still pretty steep for almost the entire trail. With our backpacks it took us about an hour or more to reach the lake, without backpacks I’ve done it in 35 mins, but we were moving fast. The 3 of us shared a tent, so we pitched it sometime around noon and settled in to make lunch and have a lazy afternoon. The campsite is very forested, so it doesn’t get much sunlight, and only in the morning, so it can get really cold in the trees in May. We scrambled across the river along the logs to the other side so that we could chill on the rocks in the sun and read for a bit. I’m not sure how easy it is to normally cross the river – I suspect it depends on the previous winter and the water levels. Fortunately it was easy when we visited, but I’m sure that’s not always the case. We had gorgeous weather, so it was pretty warm lying out on the rocks. 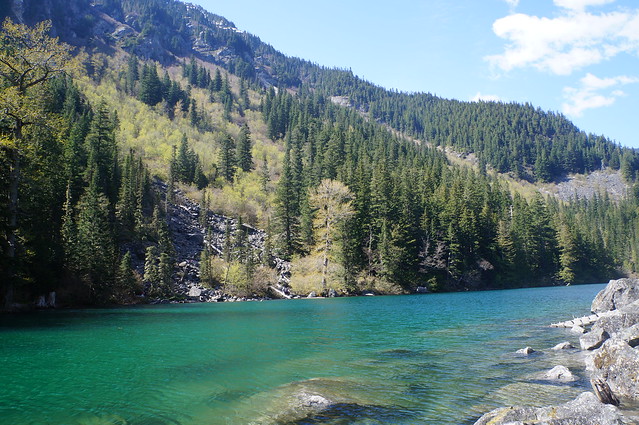 It still gets pretty cold in the mountains in May, so we brought lots of warm gear for sitting out and for sleeping. Since it was a short hike, we hauled up lots of luxury items, including a frisbee, my hula hoop, and my hammock. Please be aware that there are no campfires allowed in the park. This rule gets ignored a lot at the campsite and it really bothers me. Since it was May, there was no fire ban in place yet and a lot of people take that as free reign to have campfires, but my suspicion is that the real reason campfires are banned is because there’s just not enough firewood in the area for people to make them. You have to go out in the woods to collect your own firewood and it is very damaging to the natural landscape and I’m sure lots of habitat. You can see where people have been chopping down trees over the years and I support the ban here to protect the environment. So please don’t have campfires if you’re going up there! In terms of other facilities at the lake, there are a few tent pads and a bear cache (take your garbage home with you please! So many people leave trash in the bear cache), but the washroom facility is bare bones. It’s just a pit toilet up on the hillside (no walls, no toilet paper).

But on to more fun stuff. On the second day we decided to pack a lunch and day hike up to Greendrop Lake. At the time, we did not have microspikes and we managed okay, but I’d recommend them as there was still some snow near the top and I think the ice and snow levels could easily vary based on the year. It’s about 8km round trip to hike up to Greendrop from Lindeman. My favourite part of the hike is the first section right when you leave the campsite. You continue on along the edge of the lake across the many boulder fields. When you reach the end of the lake, there’s a beautiful view looking back at the lake and tons of big rocks to relax on. In retrospect, this is the place to hang out and read. If you’re only going as far as Lindeman Lake, don’t miss out on this view, make sure to hike up to the end of the lake, it’s not that much further. 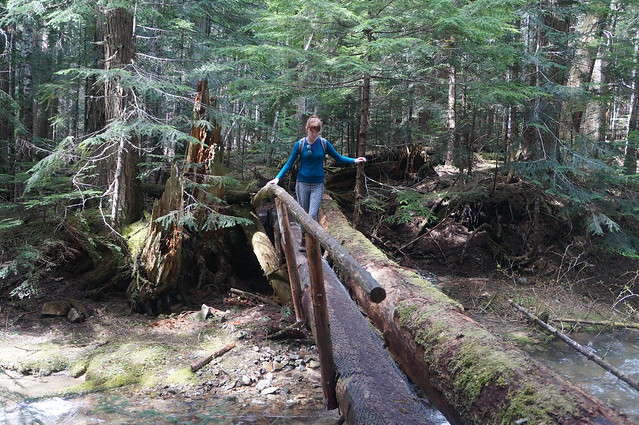 I don’t have that much else to say about the hike to Greendrop Lake though. There’s a lot more uphill and few more boulder fields to pass over. It’s not too difficult a hike, although it was somewhat confusing near the top because there was still snow there and it was difficult to find the trail. But overall it’s not one of the more scenic hikes I’ve done and there’s not much of a view of Greendrop Lake. I know some people love camping up at Greendrop, but we didn’t really see the appeal. In May it is substantially colder than Lindeman Lake and we were freezing trying to make our lunch. We couldn’t find anywhere that was getting sunlight, so we ate as fast as we could and then started to make our way back to Lindeman again. Later in the year you can do a 20km loop from Lindeman to Greendrop to Flora Lake and then back down again, but I wouldn’t attempt this until July because there will still be lots of snow at higher elevations.

On our way back we decided to take a long stop at the end of the lake to sunbathe on the rocks. It was really warm lying out and Carolyn and I decided to do a polar bear dip in the lake. The water is absolutely freezing in May (and likely all year round since it’s all snow melt), and your body starts to go numb as soon as you jump in, but the shock to the system is soothing on your aching muscles and we loved the quick dip in the water. 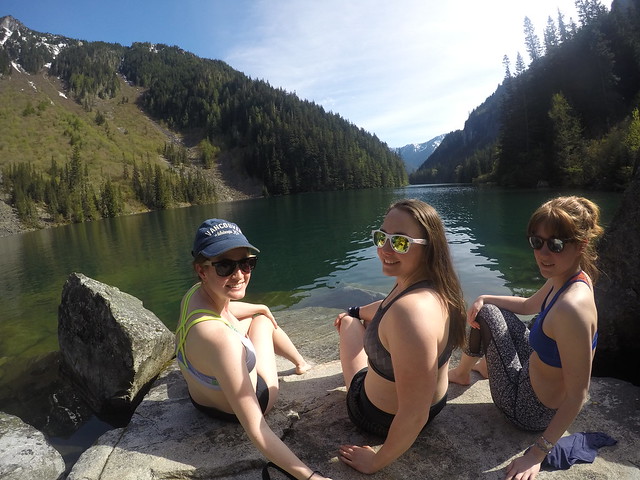 So overall it was a pretty relaxing long weekend hike. We ended up making it an annual trip and we’ve always tried to keep it as a more relaxing start-of-season hike. We spent lots of time lounging in the hammock and playing frisbee and I taught Carolyn a trick or two on my hula hoop. We were camped on a bit of slope, so we’d wake up every morning with the 3 of us having shifted down to the bottom of the tent overnight, but we had a good laugh about it. Me and Carolyn are morning people, so we loved going to bed as soon as the sun went down and then getting up early to make breakfast. Meg is definitely a night owl, so she’d chill outside watching the stars and let us fix her breakfast in the morning (never ask Meg to be responsible for breakfast lol). We didn’t love Greendrop – but I have lots of fond memories at Lindeman Lake and this hike was the start of a bigger tradition that has become one of my yearly highlights. I’ll be sad to miss it this year, but hopefully we’ll be back at it later in the season!