Well it’s that time of year again! Time for my annual snow camping trip with Carolyn and Brandon! It’s a new hobby for us, so we’ve been trying to get out at least once a year to work on our snow camp skills. Carolyn broke her ankle back in July last year and it’s been a really long time healing, so this was our first time out together since last Spring. We have a few snow camps on our bucket list, but we wanted a shorter one for her first snowshoe since breaking her ankle, so we decided to try Artist Point in Washington. It has a fair bit of elevation gain, but it’s not very long – only 6km round trip. 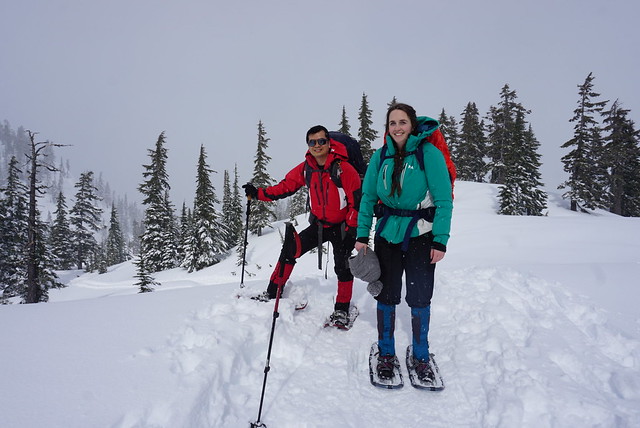 Our first discovery though was that camping across the border sucks. I made a few trips down to Washington this year with Lien for day hikes, but when you’re trying to pack for an overnight trip, it’s a big hassle. We had to leave snacks like jerky, dried mango, cheese, and trail mix behind, and modify our normal camp dinner. Brandon makes a mouth watering backcountry thai curry chicken that we eat on almost every adventure, but we couldn’t bring the chicken or veggies across, so we opted for my dehydrated vegetarian chili and macaroni instead. The chili is fine, it’s just not quite as rewarding as thai curry chicken (okay A LOT less rewarding).

So crossing the border was definitely a pain, but I have to admit, we’ll probably keep on doing it because there are some really great hikes in the Baker-Snoqualmie National Forest. The actual border crossing was quick because we crossed in Abby at the Sumas Crossing and drove to Mount Baker from there. I snowshoed to Artist Point last year, which was what inspired me to try snow camping there this year. In the summer you can drive most of the way up to Artist Point, but the road and parking lots aren’t plowed in the winter. There’s a ton of open space at the top for the parking lots, which is why I thought it would be a great place to snow camp! 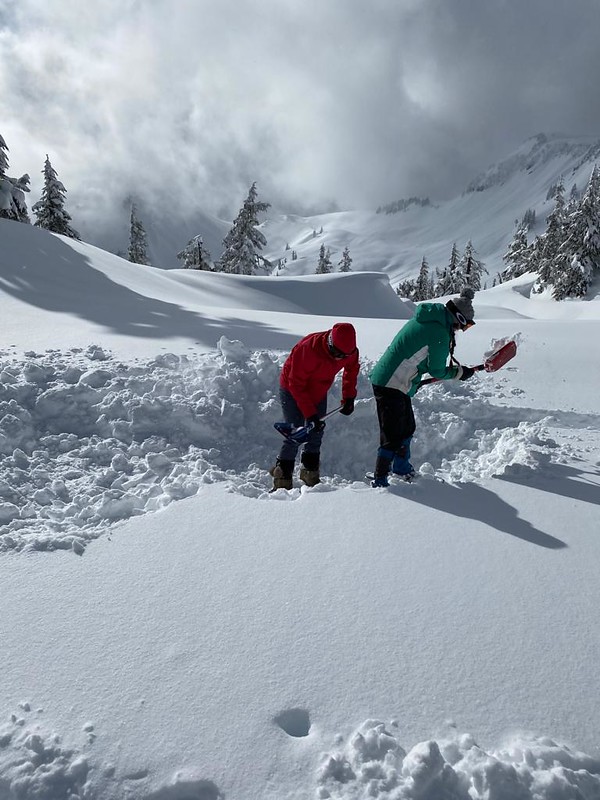 We started hiking up sometime around noon. The last time I’d hiked up there it was a bluebird day and there was a million other people on the trail, but it was a bit overcast when we went, so there was definitely less people around, which was nice. The area had also received a massive dump of snow the night before (60 cms!), so the entire area was covered with a fresh blanket of shimmering powder. It was definitely a snowshoe day (as opposed to spikes). We had nice views hiking up, though the occasional clouds moved through, sometimes obscuring our view of the mountains, but not our visibility.

That changed a bit when we reached the top. You come up a pretty steep slope before getting to a large flatish base area where the parking lot(s) are located in the summer. The area attracts a lot of backcountry skiers and from there some hike up to Artist Point (another ~15-20mins), while others continue on to table mountain or down into the bowl going back towards the (base) parking lot. We didn’t want to camp right on Artist Point because it’s pretty exposed, but planned to find a somewhat sheltered spot around the parking area. Once we crested the last slope though, the fog moved in and it became harder to see where we were going. Plus in the winter it’s really hard to tell what is actually the parking lot. We wanted somewhere sheltered, but also with a good view. We ended up picking a spot looking out towards Table Mountain and Mount Baker that had a few banks sheltering it on either side. 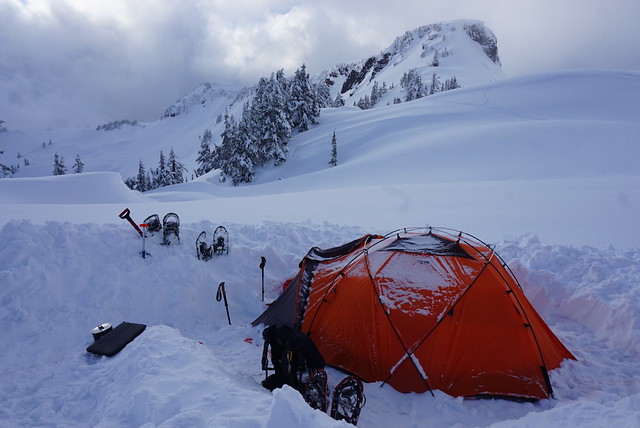 Fortunately the fog moved out again and our visibility improved a lot while we were setting up camp. We always dig out tent hole too small, so Carolyn outlined a truly massive site for us to shovel out this time. It was clearly too big, but for some reason none of us argued with her and just got to work shoveling! It took quite a while because there had been so much snow the night before and we had to dig down about a metre before we could finally start stomping it down and compacting the snow. Eventually we got enough space for the tent and realized we’d kind of over-shoveled a bit if we still wanted a snow wall to provide some shelter for the tent, so we built up a snow counter on the last side and made a pretty slapdash kitchen that actually ended up being pretty good.

The later it got, the fewer people around, but one giant group showed up in the middle of the afternoon – it must have had 40 people! We think it was an avalanche safety course because there seemed to be one guide and they started digging some shelters themselves. It was obvious from their packs they weren’t staying overnight, so we kept joking they should come dig out our hole for us since they weren’t going to use theirs anyways! 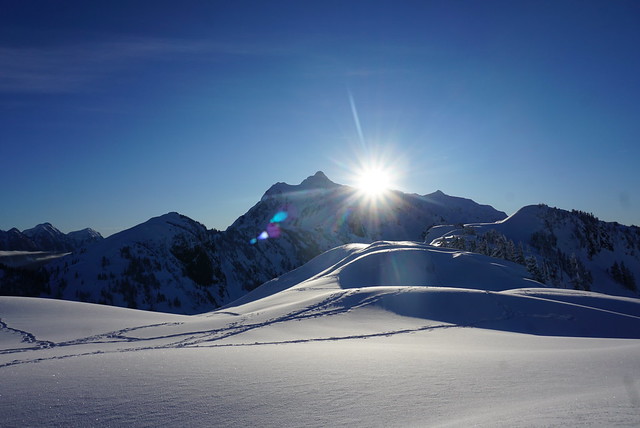 The temperature was around -5 degrees, which in my opinion is perfect for snow camping because you don’t want the snow to be wet at all. It continued to snow on and off as we were setting up our shelter, but the wind kept down and we didn’t have any problems. I love snow camping, but it is definitely a lot more work. It was pretty late in the afternoon by the time we finished the shelter and we decided we wanted to start melting snow for water right away since it takes forever and it gets dark early. It did take a long time, but fortunately the snow was all very clean and it tasted a lot better to drink than the snow on some of our previous trips. We started dinner before dark, but it was definitely dark by the time we finished and started cleaning up.

We puttered around camp for a bit with our headlamps, cleaning up and sharing Carolyn’s flask. Eventually we climbed into the tent because we always look forward to getting into our sleeping bags on a cold winter night. By the time we were all geared up and ready for bed, Carolyn asked me to check the time and I turned on my phone to see 7:30pm staring back at me! I couldn’t believe it! We all knew the sun sets early, but we had a good laugh at ourselves all set up and ready for bed that early! At Elfin Lakes I’d set up and done some star photography, which kept us up a bit later, but the clouds were moving around a lot and it wasn’t really a great night for star photos, though we did catch a great view of Orion at one point. 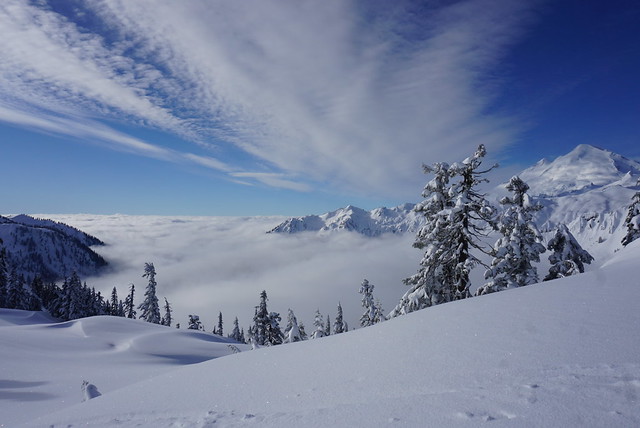 We read for a little bit, but it’s cold with your hands and arms out of your sleeping back, so it was probably still only 8:30pm when we turned off the lights and went to bed. Carolyn was thrilled about it because she loves to go to bed early without anyone making fun of her for it! As usual, it was a fair bit of work to keep warm overnight, but we all managed it and it was 7:30am before we finally got up.

It was a big change from the previous night when we crawled out of the tent. It was a gorgeous bluebird day with the sun shining down on us! We wanted to make first tracks up to Artist Point, so we grabbed some snacks and postponed breakfast to hike up to the point. It was definitely a good way to warm up! We were all sweating by the time we reached the top and we stayed up there for a while taking photos and goofing around in the snow. The landscape looked much the same as the last time I’d snowshoed up there, which was also a bluebird day, but the big difference was that we were the only people on the mountain. 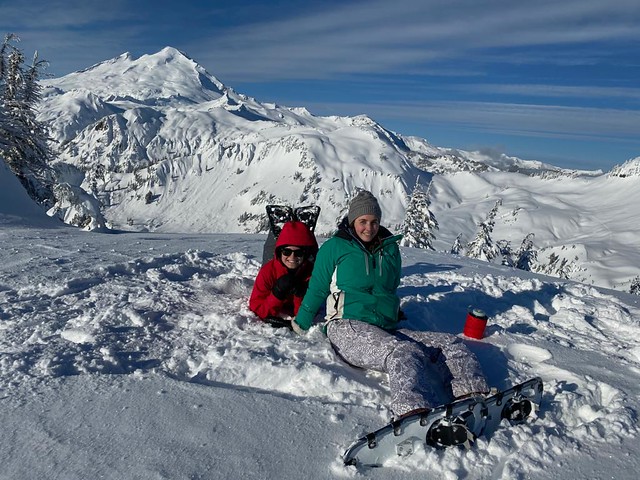 The point gives a great view of Mount Shuksan, but the Baker side stole my attention on this trip because there were a ton of clouds sitting in the valley around it and it felt really cool to be up above the clouds. While we were up there we noticed the fog was starting to creep up the valley on both sides and we decided to trek back to the campsite for breakfast. By the time we got back the fog had totally moved in and within 30 minutes you couldn’t see any of the view any more! I felt bad for all the day hikers and skiers coming up later, but lucky that we got to enjoy the nice weather before the clouds moved it. It wasn’t snowing, but visibility was pretty bad and I can see how it would be easy to get lost in those conditions. So it was a good reminder of how fast things can change in the backcountry.

Otherwise it was a pretty uneventful climb down. Snowshoes definitely aren’t as fun going downhill, so we had a few stumbles on the way down, but no more injured ankles! I think we can definitely call this trip another success!