Growing up in Newfoundland, I never really liked Spring because it’s barely a season there (pretty sure we just get a second winter). But Spring in the Lower Mainland is fantastic! It actually warms up when it’s supposed to and pretty much the entire city has been in bloom this April. But as much as I love it, it also kills me a little bit because even though it warms up so much in the city, it still takes a long time for all the snow in the mountains to melt. Proper hiking season doesn’t really start until late June, early July, but there are lots of lower elevation hikes that you can do in the Spring that are located right in our backyard! Here’s a few of my favourite Spring hikes to tide you over to those warmer summer days:

The view overlooking Deep Cove on the Lynn Valley section

The Baden Powell Trail is a whopping 42km long trail that runs all the way from Deep Cove to Horseshoe Bay. But don’t be intimidated by the length, the entire trail can be done in a series of day hikes, they’re just best done with two cars (one at the start and one at the end) so that you don’t have to backtrack. The four main trail sections include Deep Cove to Lynn Canyon, Lynn Canyon to Grouse Mountain base or Cleveland Dam, Cleveland Dam to Cypress parking lot, and Cypress to Horseshoe Bay. I’ll admit that I’ve only actually done the Deep Cove to Lynn Canyon section, but I’m hoping to hike a few more sections! I believe the more popular sections are between Deep Cove and Grouse, because there is significant elevation gain between the Cypress Mountain sections. Either way, there’s a lot to explore on this forested trail! Fun fact, the trail is named after Lord and Lady Baden-Powell, the founders of Girl Guides and Boy Scouts!

Clowning around at Big Cedar

This is a great trail located in North Vancouver that hikes through the forest to 2 main attractions, a really big cedar tree and Kennedy Falls. The hike is 10km long, with approximately 150 metres in elevation gain. We thought it would be a pretty quick hike with such limited elevation gain, but there is a lot of up and down through the woods, so the cumulative elevation gain is greater. It’s also a more technical trail than I was expecting, so if you’re looking for an easy walk in the woods, this isn’t the one for you. However, if you’re looking to warm up those legs in preparation for the summer hiking season, this is the perfect hike! There is a lot of spray coming off Kennedy Falls with the Spring run-off, so bring a rain jacket if you want to get close for photos. The trail is dog friendly, but small dogs might struggle with all the trees and roots across the trail.

If you don’t want to travel to the North Shore, there’s some great hikes available in Belcarra Regional Park, located just past Anmore. Jug Island Trail is one of my personal favourites because it’s a short hike, but a good warm up. It’s only 5.5km long and has about 100 metres in elevation gain (it’s listed as having none, but that’s because it starts and ends at sea level). It’s a mostly forested hike, but there is a nice view about midway through the trail looking down at the backside of the peninsula, as well as a beautiful view of Jug Island and Indian Arm at the end of the trail. The beach at the end of the trail is also accessible by kayak from Deep Cove or Cates Park if you’re up for a boating adventure! This is the only trail I’ve done, but there are other short trails in the area such as Admiralty Point and Sasamat Lake.

The Lower Seymour Conservation Reserve is located between Grouse and Seymour and protects the ecosystem running up towards Seymour Lake, one of Metro Vancouver’s 3 water supply lakes. I worked in this area for about 8 months, so I had lots of time to explore some of the trails and there’s a ton of options to choose from! They’re all pretty similar in that they’re mostly forested trails (common theme for Spring hikes as it’s too early to get up in the mountains). Parking is available just off the end of Lillooet Road at the Rice Lake Gate, at the Lynn Canyon Ecology Centre, or off of Rice Lake Road at the entrance to Lynn Headwaters Regional Park. I’d personally recommend avoiding the Ecology Centre as it draws a lot of tourists for the suspension bridge, it’s only about 1km hike to the bridge from the other entrances if you still want to visit. Some of my preferred trails include Fisherman’s Trail (13km), which hikes up to a viewpoint overlooking the River, and Rice Lake (3km), which is great for fishing (if you’re into that). I also like the Lynn Headwaters Trail (6km), which follows Lynn Creek and can be extended to hike to Norvan Falls (14km). The falls are definitely best explored in the Spring when run-off is high, by Fall, the falls are just a trickle!

I know, I know, all the locals are already super familiar with Lighthouse Park, but as an East Coaster I only visited the park for the first time last year! This is the place to go if you’re after ocean views! There’s still a ton of forested trails here, but they pop in and out of the woods along the coastline. I think of Lighthouse Park as a bit of a build-your-own-adventure trail because there’s tons of trails running through the park and you can pick which circuit you want to do. When I visited, we mostly followed the coastline, making a bit of a loop from the parking lot. There’s limited elevation gain in this park, but lots of great views!

I’m a huge fan of Golden Ears Park. It gets crazy busy in the summer though, which is why Spring is great time to visit! Don’t even think about doing Golden Ears Peak, it’s way too early for that, but there are some nice trails located at the back of the park. Drive to the far end of Alouette Lake and park in the North Beach Campground lot (do not actually go into the campground, parking is not permitted there). There’s two trails, the Lower Falls Trail and the East Canyon Trail to Viewpoint Beach. At 5.5km, the Falls Trails is really more of a walk, but affords some nice views of the mountains from the river and a nice waterfall at the end of the trail. The trail to Viewpoint Beach is a little longer at 8km, and has a great view looking up at the mountains from the beach at the end. There’s about 200m elevation gain on the viewpoint beach trail and none on the falls trail. On maps, it looks like you can connect between these two trails, but I’ve done these hikes several times and I’ve never been able to find where the two connect.

Looking back at Grouse Mountain, the Lions, and the watershed

This is another park I’ve explored as part of my work and it is a great urban trail in North Vancouver. If you’re feeling ambitious, you can hike all the way from Ambleside Park up to Cleveland Dam (~14km), but you can also access the trail from Cleveland Dam or from some of the local roads on the West side of the Park. The engineer in me loves Cleveland Dam and there’s a great view of the Lions looking out over Capilano Lake (another one of Metro Vancouver’s drinking water supply lakes). You can drive right up to the lake, but I’d recommend starting somewhere lower on the trail and making the dam and lake your lunch break in the middle of the hike. I like this trail because there’s tons of neat bridges to cross over with great views of the Capilano River and canyon. You can also stop in and visit the fish hatchery along the way! 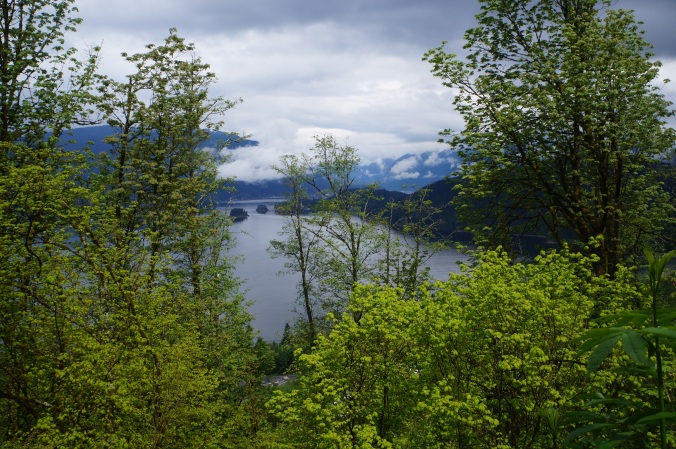 The view from Burnaby Mountain Park