The weather has finally started improving over the last few weeks, so I’ve been getting ready to start posting more about Spring and Summer hikes, but I have one last winter-related post to share. After our ski trip to Apex and our snow camping adventure at Keyhole hot spring, I decided it was time to pack away my skis and snowshoes for the season. However, the weather was so nice in mid-march that my friend Lien convinced me to get the snowshoes out for one last spring snowshoe adventure. 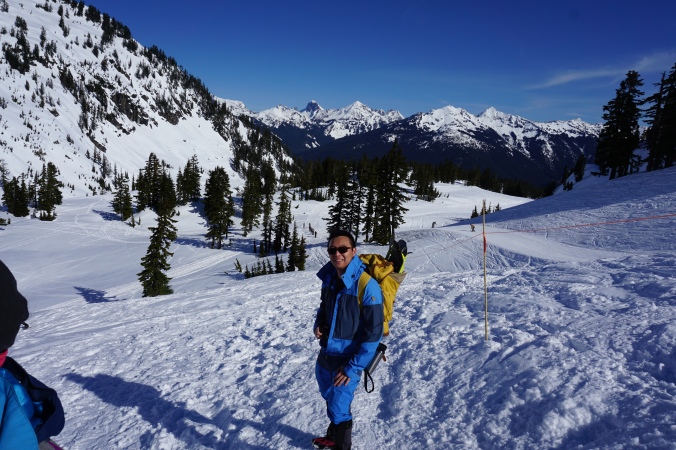 Apparently Lien’s exhausted everything within 2 hours driving distance of Vancouver, so he’s started exploring south of the border to get his mountain fix. We’d both seen a few posts throughout the winter of people snowshoeing at Artist Point, near the Mount Baker ski resort, and it looked like it had the most picturesque views, so we decided to check in out. We did our first Washington State hike a few months earlier (before the snow), in late October, and had a blast, so we were optimistic about Artist Point. My sister Emily moved to Vancouver in January of this year, so she decided to join us for the adventure.

You never know how long it’s going to take crossing the border, but we crossed in Abbotsford, so it didn’t take long at all. Artist Point is located right at the Mount Baker ski lodge, so it was about a 2 hour drive in total from my house in New Westminster. Like I said, we’ve only just started exploring the North Cascades region over the past few months, but it is incredibly gorgeous and I expect we’ll be spending more time there in the future! 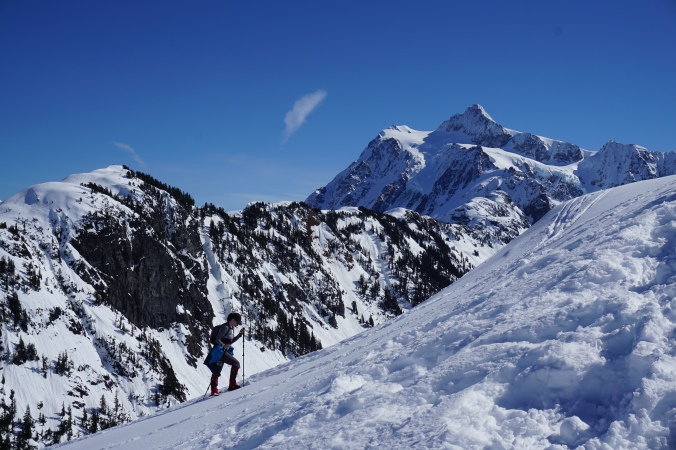 Artist Point was a little overwhelming at first. Follow the main highway out to Baker and then continue past the first ski lodge up to the second parking lot. Again, continue through this parking lot and you’ll come to another parking lot in the recreation area (outside the paid ski hill). I say it was overwhelming because there were just so many people there! I was expecting it to be busy at the ski resort, but it was just as busy in the rec area. Artist Point is popular among both snowshoers and backcountry skiers as there’s a lot to explore in the area. I’ve never really been interested in backcountry skiing or ski touring because it seems like a lot of work and a bit intimidating. Whenever I’ve seen skiers while snowshoeing, I haven’t thought it looked any more fun than snowshoeing. But Artist Point was one trail where it was sorely tempting to take up backcountry skiing!

The trail is both straightforward and somewhat confusing. I say that because it appears that there are a ton of different trails going in every direction, but most of them end up at the same place, they just take different routes of varying difficulty to get there. The only thing to avoid is to make sure you don’t hike into the big ski bowl at the very beginning. Follow the trail up along the edge of the ski slope and you’ll be fine. It’s marked with boundary markers for the skiers at Baker and you can just follow along the side. Some skiers were skiing in the bowl, but it is higher avalanche risk in there, so if you want to explore, make sure you have your AST training and the proper gear. 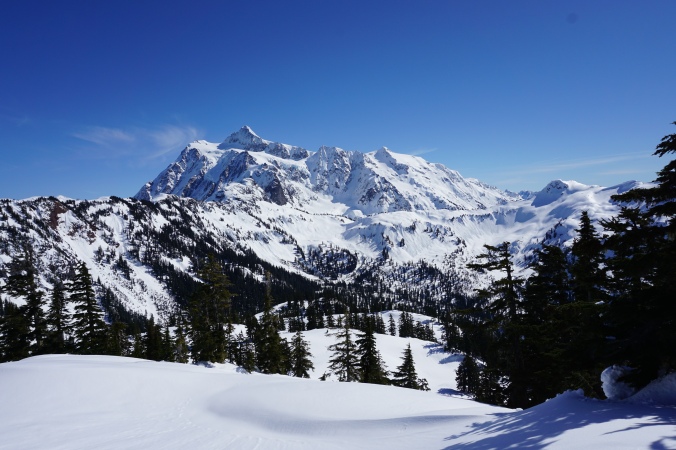 Since we had neither of those things, we stuck to the marked trail. The rest of the trail is fairly low avalanche risk, but again, make sure to check the level online before you go hiking. Also, a friendly reminder to always give someone your trip plan, especially if you’re crossing the border. But I would definitely highly recommend the Artist Point Trail! I think it’s actually a great trail for beginners because it’s not very long, only about 6km in total, and the elevation gain is reasonable at about 300m. Plus the payoff for level of effort expended is unbelievable! Even the views hiking up the edge of the ski slope are great, but once you reach the top of the plateau, it’s a 360 degree panoramic view!

I thought we were looking at Baker as we were walking up because it’s where the ski resort is, but I learned on this trip that the Mount Baker ski resort isn’t actually on Mount Baker, it’s on Mount Shuksan. Logically this makes sense because Mount Baker is really too large and inhospitable an environment to have a ski resort, but I guess I never really thought about it before. Once we reached the top of the plateau, I realized we hadn’t been looking at Mount Baker on the way up because Mount Baker was actually located on the other side of the ridge. From the top of Artist Point, you can see the jagged peaks of Shuksan on one side and the flat volcanic top of Baker on the other. 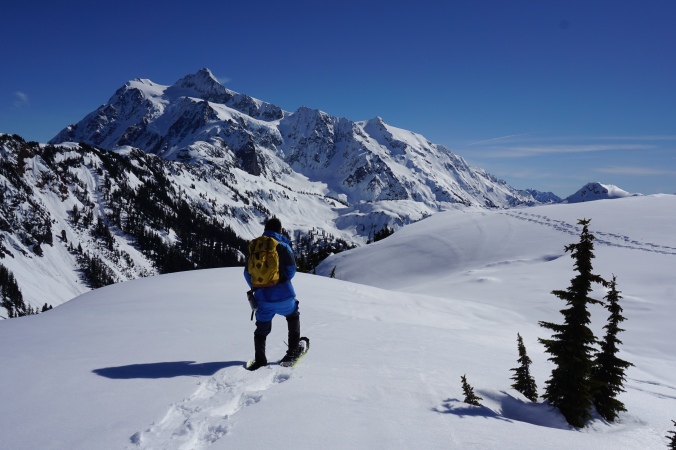 We ate lunch as soon as we hit the ridge because we were pretty hungry and then we did some more exploring afterwards. When you hit the ridge, you’ll be able to see Table Mountain on the right and then another hill on the left. The hill of the left is actually Artist’s Point and this is where I’d recommend exploring. There’s a ton of great views up there and it’s a great place to start your ski back down. There were some people snowshoeing Table Mountain, but it’s a very steep ascent to the top and it has a higher risk of avalanches, so we opted to skip it. In the summer you can actually drive right up to the top of the ridge, so we may have to come back in warmer weather to explore further!

There was a crazy amount of people exploring around Artist Point, but it is a wide open area, so it never felt too crowded. It was busy, but not so crowded on the peaks that you couldn’t get nice photos. I find it’s always hard to know whether or not to wear snowshoes or spikes on heavily crowded trails, but this is one trail where I would recommend snowshoes, even with the heavily packed trail start. Emily and Lien wore snowshoes, but I decided to take the risk of wearing spikes. It made for a much more enjoyable ascent, but when it opens up at the top, snowshoes are definitely better because there’s still a lot of fresh powder up there. I managed with the spikes, but snowshoes would give you a bit more freedom. 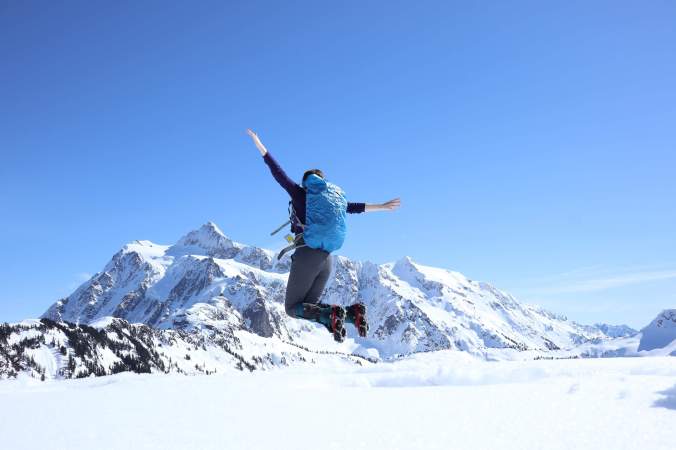 Overall we really lucked out on this hike. It was around mid march when we did it and we got clear blue skies. It was about 10 degrees on the mountain but it felt quite hot with he sun constantly bearing down on you. There’s no shade anywhere, so bring sun protection no matter one time of year you go. There wasn’t a lick of wind when we visited, but in different conditions it could be pretty rough up on the ridge with blowing snow. I’m going to have to add it to my list of places I want to snow camp though because there is so much wide open space up there and such amazing views, it would be incredible to sleep up there and get to watch the sun set and rise over the mountains.