Though we went to bed pretty early on Day 1, we didn’t get the best night’s sleep. It was definitely not cold, but Emily woke up with heartburn in the middle of the night and had to go for a little midnight stroll to ward it off. Then she proceeded to read her book in the middle of the tent with the light on, so I went and made some unsuccessful attempts at star photography. All while Carolyn slept on oblivious. She doesn’t usually sleep very well, so we were all surprised by this, but she’s also generally pretty cold at night, so maybe it had something to do with actually being warm for once. Either way, when me and Emily finally drifted off to sleep in the early morning, Carolyn was awake and ready to go at 5:45am. Yay. 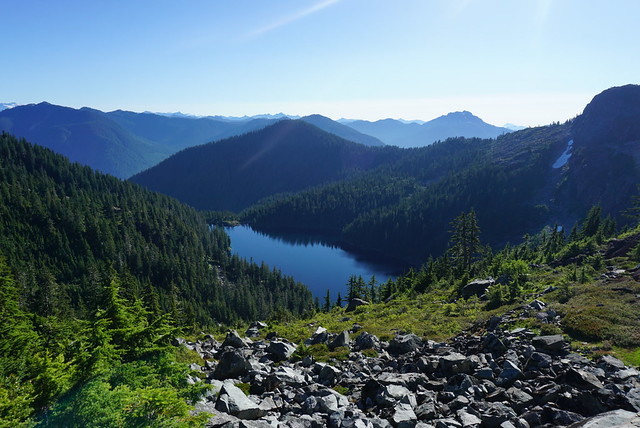 It was a pretty dismal breakfast. While we weren’t running super low on water, we were definitely conserving, so we boiled the bare minimum for our oatmeal and then packed up camp for the day. On the plus side, it was another gorgeous day and it was already hot enough for shorts at 8am, so it was probably a good idea to get an earlier start. We departed the campsite at 8:30am with somewhere between 1-1.5L of water each and 3.5km to go to the first water source.

Unfortunately, it was some of the hardest 3.5km. Between the Lions and Magnesia Meadows, the trail follows peak after peak after peak. It was gorgeous and breath-taking, but a little stressful when you’re sweating buckets, thirsty, and running low on water. If it hadn’t been so hot, I think our water would have gone a lot further and we would have been a lot less tired, but there’s very little shade along the trail and it’s still very technical, so it makes for a slow go. I had sussed out the topography before we left camp and we could pretty much see our end goal when we started, but it didn’t make the morning go any faster. The hours dragged on as we lugged our packs up and down peak after peak. Carolyn was feeling strong, but me and Emily were definitely struggling, mostly I think because of our anxiety about the water situation, but the heat certainly didn’t help. 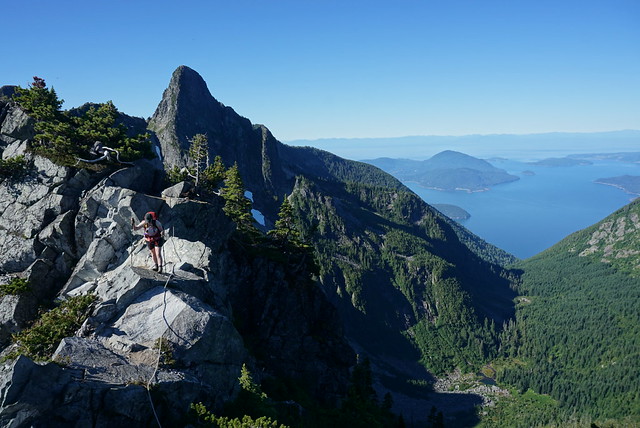 Finally, we started the last climb up the pass to Magnesia Meadows. We could see Mount Harvey looming over the meadow and we were just hoping the water source wasn’t located very far off the trail. We’d intended to summit Mount Harvey since we only had about 10km of hiking to do that day, but after 3.5km took us 3.5 hours of hiking, water was our main priority. We could see the red roof of the emergency hut as we crested the slope and from there we all but ran to the water source, relieved to see a small, but pretty clean water hole off the side of the trail.

We all finished off the dregs of our platypuses and then set to filtering enough water for the rest of the day. Since it was now noon and we were all in need of a break, we decided to have lunch in the meadow and made the pretty much unanimous decision to skip Mount Harvey. It was a little bit of a bummer to skip it, because we were so close to it, but it also looked really steep and we were all tired, so it’s important to know your limits. Plus you know, it’s always worth leaving something to come back for. 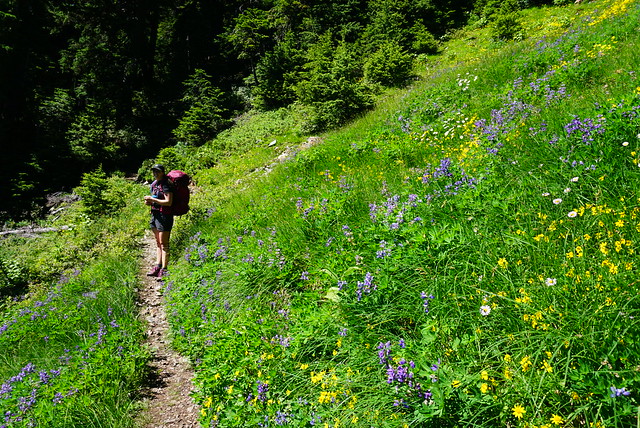 The hiking improved a lot after lunch. It wasn’t as scenic as the morning, but the trail was a lot easier and mostly hiked around the bowl of Magnesia Meadow. We were thrilled to discover there were still some wildflowers in bloom and had a pretty nice hike up to the branch for Brunswick Mountain. Again, we had planned to summit Brunswick Mountain, but we decided that, given the heat, we’d rather spend our time swimming in Brunswick Lake than hiking up another mountain. So Brunswick Mountain will also have to wait for another day.

I don’t regret the decision though. We ended up arriving at Brunswick Lake around 3pm and we were all zonked. We hadn’t decided in advance exactly where we were going to camp, but we’d originally been thinking Deeks Lake, which was a few kilometres further along the trail, but we’d heard from many people that Brunswick Lake was nicer. We could see the beautiful blue hues of the lake poking through the trees and as we exited the woods next to the lake, I truly could believe we were in a tropical paradise. The water was so clear and blue and looking super inviting. We knew it was freezing of course, but it still looked inviting. 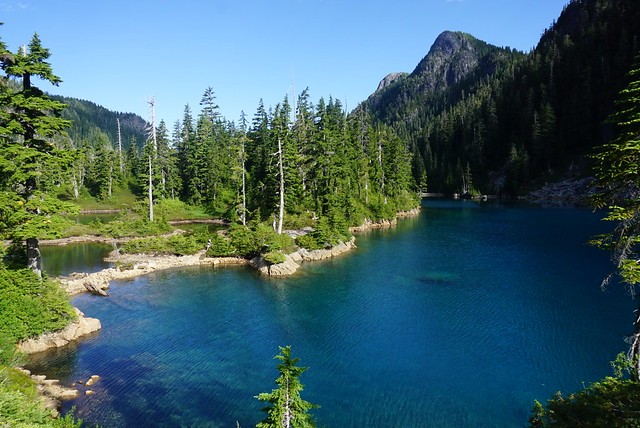 So we decided to stay there. We dropped our bags in an empty clearing and made a beeline straight for the water. As expected, it was cold, but honestly we were expecting it to be worse, so we were pleasantly surprised. We didn’t want to stay in the water too long, but it wasn’t the run-in-and-out-as-fast-as-you-can kind of cold… if you know what I mean.

The rest of the afternoon was lovely and lazy. We lounged in the sun and did a whole lot of nothing. There was definitely a lot more traffic at Brunswick Lake, especially since it was a Saturday. There were probably 4 or 5 tents when we showed up and more backpackers kept showing up throughout the day, all the way until 9pm. The last people that I was aware of were 2 girls who had hiked all the way from Cypress that morning. They said they’d been hiking for 12 hours, which I admire, but definitely don’t envy. 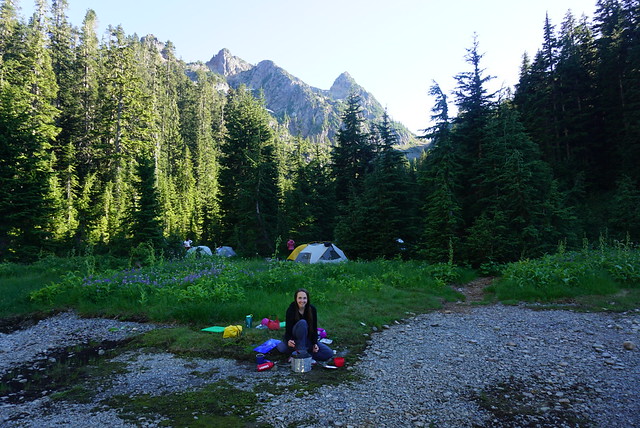 Carolyn made us chili for dinner and we enjoyed watching the sun go down over the mountains. Even though there were tons of people at the lake, we were some of the only ones who hung out on the beach into the evening. It was pretty buggy and most people were taking refuge from the mosquitoes in their tents. As beautiful as Brunswick Lake is, the real downside to the Howe Sound Crest Trail is that there are no outhouses anywhere on the trail. I’m fine with peeing in the woods and digging catholes, but there were a lot of people camping at Brunswick Lake and there are few private places to use the washroom. With so many people, I do think it’s time for BC Parks to invest in an outhouse at each of the campsites, if only to protect the landscape. Check out my recent post on Backcountry Bathrooms if you looking for some tips for when there are no facilities.

It was another warm night in the tent and I think we all slept better on the second night and actually slept in until almost 8am the next morning. We took our time with breakfast, so it was a bit of a later start, but it was nice and chill. It’s about an hour hike to Deeks Lake, passing by Hanover Lake and some beautiful waterfalls. We were pretty much done with the views for the trek, but it was nice to hike in the shade of the forest for a change. Deeks Lake is bigger than Brunswick Lake and also very beautiful, but there’s not very many campsites and they’re all in the trees, so I definitely don’t regret staying at Brunswick Lake – in my opinion it’s the better of the two lakes. 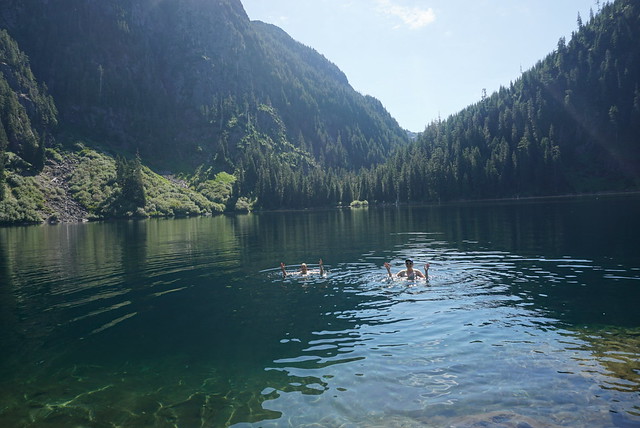 We decided to finish off the trek with a swim in Deeks Lake. It was also very cold, but we thought it was slightly less cold than Brunswick and stayed in the water for a while. After that it was ~8-9km hike down to the parking lot. There’s not a lot to see along the trail and you undo a lot of elevation gain. In total we did about 1500 metres in elevation gain over the entire trail, but we also had almost 2400 metres in elevation loss, half of which was on the last day, so it was mostly a climb down on Day 3. It’s pretty steep for the first section after you leave Deeks Lake, but it eventually levels out a bit into a steady downhill. The last section of trail is outside of the park and mostly along old forestry roads. The very end of the trail now has a detour because of mining work happening on private land at the end of the trail. We were pretty fast coming down the trail, but I could see it being a bit of a slog if you were hiking the other direction. Though there were a lot of people at the Lake, I think the majority of them had hiked up from Porteau Cove. A handful of us had done the whole trail from Cypress, but I think we were the minority.

And that concludes our adventure on the Howe Sound Crest Trail! We didn’t summit any of the mountains we’d planned to summit, but we did still climb a lot of peaks and saw a lot of amazing views. I would do it differently in future (mostly with the water), but I wouldn’t be deterred from coming back. I think if I was to return, I’d maybe hike up from the Mount Harvey or Brunswick trailheads and camp either in the meadows or at the Lake. There’s lots of different ways to customize the trip and still lots left to explore on the trail!

Out for a jaunt with @instagrant.ob
Am seriously obsessed with this hike! The entire 13km of trail are exposed and incredibly scenic - definitely one of my favourite sections. Now that I've finished it, I've now hiked everything from Cape St. Francis to La Manche!
Had a little self timer photoshoot on my camping trip with this pinky sunset ☺️
Setting up for the night in the birch forest! It was unbelievably warm for NL when we got up the next morning. The sun drove me out of the tent by 7am and I was in shorts and ready to hike just after 8am.