I was so nervous about hiking the Tongariro Alpine Crossing. After the disaster that was Fox Glacier, I was really weary about hiking in less than ideal weather and I really wanted to enjoy the hike. The shuttles said they would be going ahead for our second attempt, but it was calling for a cloudy day with rain in the afternoon and temperatures as low as 0 degrees. I wasn’t sure if it was even worth doing the hike if we weren’t going to see any of the views, but I was incapable of walking away from a hike to Mordor.

In the end we decided to go for it and I went on the most over-prepared hike of my life. I must have been traumatized from my experience on the glacier because I packed SO MUCH extra clothing and food, it was a little out of hand. Even though I snowshoe all the time in Canada, everyone had me freaked about about the “cold” temperatures. One part of me was like, “wear two pairs of pants for the cold!” while the other part was saying, “you snowshoe in below zero temperatures all the time and you never wear two pairs of pants!” I did wear the extra pair of leggings, which was a mistake and I ended up ditching them at the first outhouse we came to, so needless to say I was desperately over-prepared. 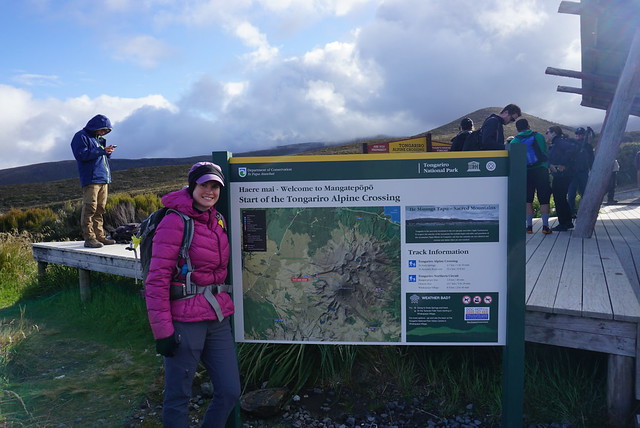 But none of that ended up mattering because we had the most awesome hike! The Tongariro Alpine Crossing is a 20km hike that goes right through the national park, crossing over Mount Ngauruhoe, past the red crater, and around Mount Tongariro back to the road. I hiked a volcano once before in Costa Rica, but this was totally unlike anything else I’ve ever done. It was super overcast when we started and we couldn’t see any of the 3 volcanoes in the park, so I wasn’t super optimistic. But the landscape is still pretty neat. We started hiking through some low shrub areas and as we got closer to Mount Ngauruhoe, the landscape started to become more barren and interspersed with volcanic rock that had been catapulted in all directions from a previous eruption.

We were really lucky and the clouds started to lift just as we were approaching our first view of Mount Ngauruhoe, also known as Mount Doom. It’s unreal because you can actually see the lava flows coming down the side of the mountain where they eventually became too viscous or cool to go any further. The volcano is still active and you do feel somewhat like you’re tempting fate by even attempting to hike through – especially so soon after the eruption at White Volcano, which occurred 2 days before we flew to New Zealand. All our friends and family told us to “have fun and maybe stay away from any active volcanoes”, to which we politely nodded and pretty much ignored since the whole center of the North Island is all active geothermal wonders. 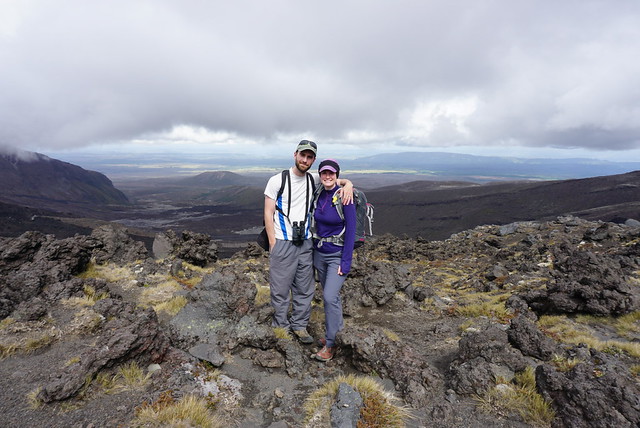 The two islands are pretty interesting in that they’re located so close to one another and form 1 country, but geographically have nothing to do with one another. The South Island is all about mountains and plate tectonics, while the North Island is entirely volcanic. There were no shortage of warnings as you approach the volcano though. Apparently on average someone is airlifted out of the park by helicopter once a week, so it’s obviously a dangerous place. Though the risk seems to be from adverse and unpredictable weather conditions and people underestimating the difficulty of the hike (it’s 20km long!) versus any risk from volcanic activity. But the signs all warn to turn around if you’re struggling or if its so cloudy you can’t see the volcano (fortunately we could).

The trail loops around the base of the volcano to Soda Springs, the only freshwater source we saw for another 15km, before starting to climb up the side of the volcano. It’s an easy walk until that point, but then you finally start climbing, which most people hate but I was excited for. So many of the hikes we’d done had been valley hikes and I was excited to finally climb something! The views as you climb up Mount Ngauruhoe are awesome looking back at the trail you’ve come from. Eventually you branch off the volcano and hike over the ridge next to it and start down into the South Crater. 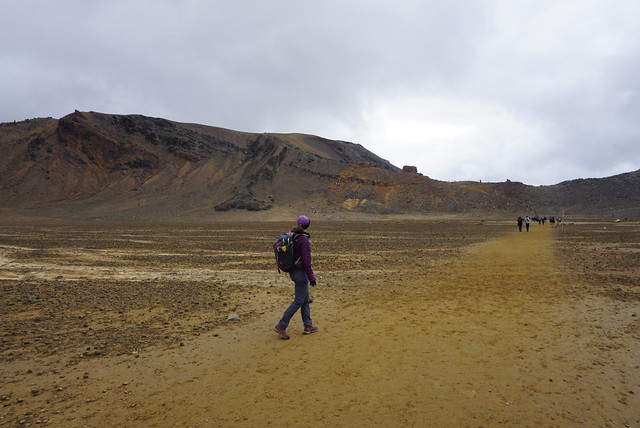 This is when the scenery really changes and I felt like I was hiking on Mars. There’s absolutely no vegetation and it’s just a straight shot across the red soil of the crater to the base of Red Crater. So you do get a respite from the climbing before starting up the side of the Red Crater to the highest point on the trail. This was probably my favourite part of the trail. Before you get to the Red Crater, you have to climb back out of the South Crater. From the South Crater ridgeline, we had an awesome view looking down into a very barren and mordor-like scene. Looking back we had a perfect view of Mount Doom, which the clouds had finally totally cleared off. Then you start hiking the Red Crater and have no idea where you should be looking because its so steep and the views are amazing on all sides.

The Red Crater was very different again. It’s hard to get an idea of the scope of the crater until you actually hike down the other side and look back at it, but it’s exactly as its name suggests, a giant red crater that’s still active and smells of sulphur with steam literally coming up out of the ground. The whole area is steaming from various vents and despite how cold it was up there, it was easy to find little hot spots. 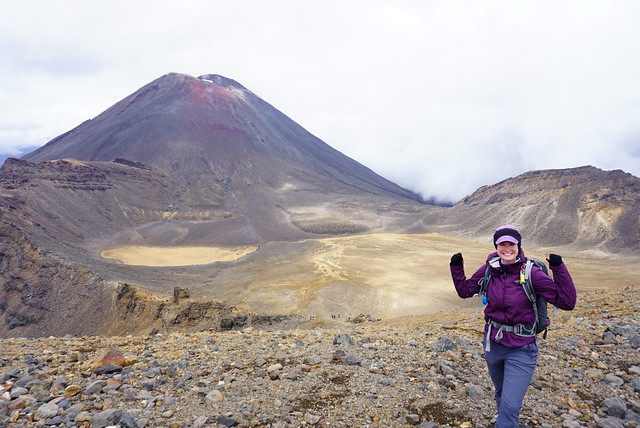 Our timing really couldn’t have been better. We got to the top for one last view of Mount Doom before the clouds ate it up again, and then rushed over to get a look at the little alpine lakes on the other side. There’s several brilliant green lakes and giant blue lake in the distance. We added a layer and enjoyed our lunch looking down at the lakes from the top.

I can understand why they make everyone hike in the same direction on the track. it’s a steep hike down the other side of the crater on a scree slope that I would hate to have to hike up. We did some exploring around the little lakes before crossing the bottom of yet another crater to climb up to Blue Lake. This is where you get the best view looking back at Red Crater, which really puts into perspective what you just climbed. It clouded in pretty fast at Blue Lake and finally started to drizzle, so we didn’t spend much time there and started to move on as we were still only a little over halfway through the hike. 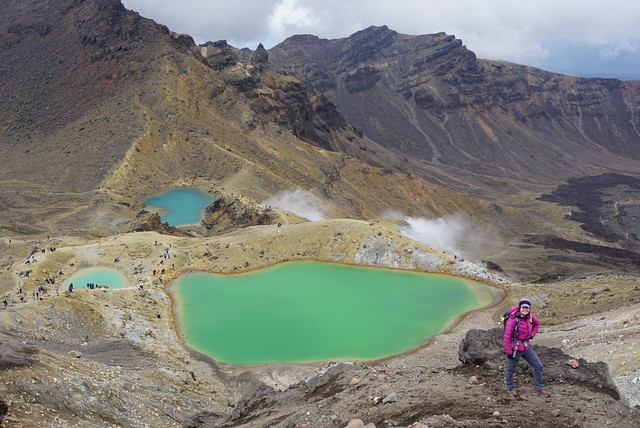 As soon as you leave Blue Lake though the landscapes change again entirely. Hiking the volcanoes and craters really felt like being in a wasteland, but as soon as we rounded the corner of the lake and started hiking down the other side, it was like coming back to Earth. I still wouldn’t exactly call the vegetation ‘lush’, but it sure felt that way after hiking across a volcanic desert. From there the last 8km are just winding back down the side of the mountain to the highway. There’s a great view of Lake Taupo and you can still see steam coming from the Te Mari Crater, which last erupted in 2012. There’s chunks of volcanic rock spewed across the landscape, which is a good reminder of the danger still associated with the park. The Te Mari Crater erupted in 2012, putting holes in one of the huts on the Tongariro Great Walk. Fortunately no one was injured, but only because the eruption took place in the middle of the night in winter. There was no prior warning, so had it been any other time of year, there almost certainly would have been fatalities. 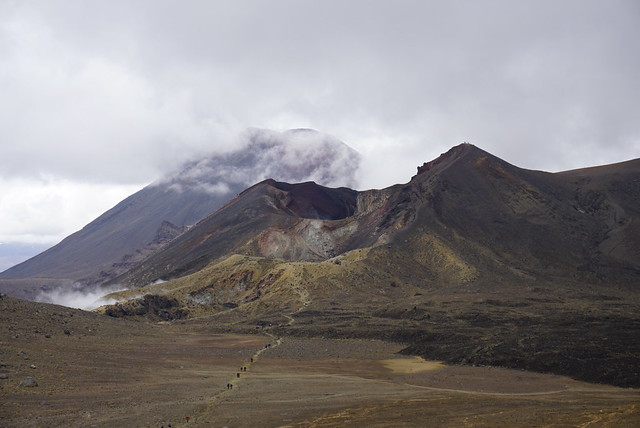 It’s definitely a sobering reminder and it seems lucky they’ve avoided disaster in the park up until now. One of the placards by Mount Ngauruhoe told the story of a school group that was hiking the volcano in the 1970’s when it suddenly started erupting, cutting off the way back and forcing them to have to evacuate over to the Red Crater. Fortunately nothing of the sort occurred on our journey. The rain disappeared as quickly as it had started and we had an uneventful hike down to the end of the trail. We felt really accomplished when we finally reached the end and had our car waiting for us!

I’m so glad we weren’t too jaded from the glacier experience to try this hike as it ended up being one of my favourite parts of the trip! We had a lot of fun goofing around on the trail, re-enacting the Lord of the Rings and taking pictures of me pretending to me Frodo, Sam, and Gollum at various parts of the trail. It’s not a hike to underestimate, but it’s also not a hike to miss! 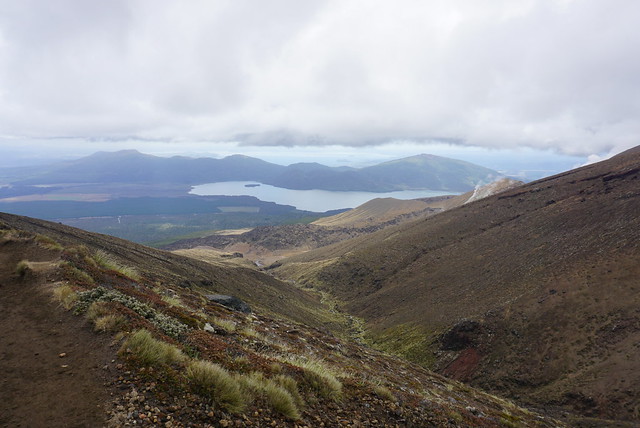