Abel Tasman had a bit of a weird feel to it because it was our last major stop on the South Island and after more than 3 weeks on vacation already, it kind of felt like it should have been the end of the trip. But we still had almost 2 weeks to go to explore the North Island, so it was far from over!

We stopped in Nelson for 1 night and stayed at this really quaint villa-type hotel. We pampered ourselves with a huge in-suite jacuzzi and went out for a really nice meal at a nearby restaurant. Since there’s sheep everywhere, Seth wanted to try lamb at least once while we were there, so we had a delicious lamb platter and stuffed ourselves silly! 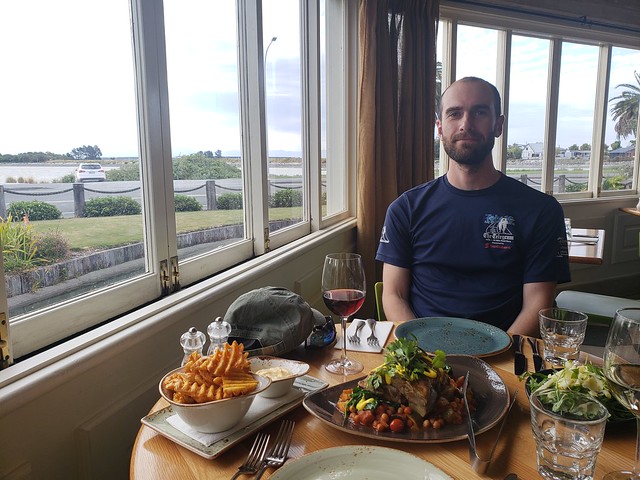 It’s a short 3 hour drive to Picton to catch the inter-island ferry. We stopped at Middle Earth Wines to pick up some novelty wine and had lunch looking out over the bluffs. Then we boarded our 3-hour ferry ride to Wellington, which was an interesting experience. I feel like we tend to shit on BC ferries, but honestly I would sail BC ferries 7 days a week rather than have to take the inter island ferry again. It’s a huge boat that can fit a lot of cars, but it is the least efficient operation I can think of. It’s a lot bigger than any of the ferries I’ve been on in BC, but it only loads one car at a time, so you have to be there super early and it pretty much takes them a full 90 minutes to load the boat. This isn’t helped by the fact that people then have to funnel up to the lounge through one entrance, which creates a ton of pedestrian traffic while cars are still trying to drive on.

Once on board it becomes evident that they pack the boat to capacity and there is literally no where to sit. We walked around for ages before finally finding two bar seats in the cafeteria. It appears we were lucky though as I saw other people sitting on the floor to eat their lunches. I didn’t get sea sick on the ferry, but it does have a sustained sway through most of the sailing which made me too nervous to do anything besides talk to Seth (normally I would read or write). It did have a gorgeous view of Marlborough Sound as you leave Picton though and I ran up to the deck a few times to take photos as we passed through the strait. 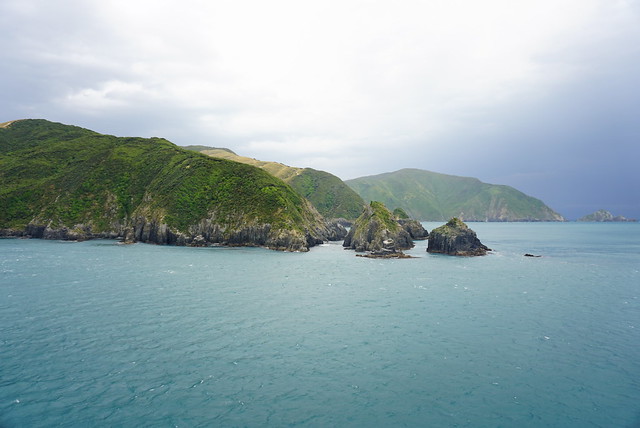 About halfway through the sailing we got a bit of entertainment when we were informed that the crew would be practicing an emergency scenario on board for “drill purposes only”. It was hilarious to watch the crew running around pretending there was a fire in the cafeteria, assembling at the muster points, preparing the lifeboats, and then eventually evacuating the ship. I’m sure it was mildly unsettling to non-english speakers who couldn’t understand the constant “for drill purposes only” messages on the loudspeaker, but we got a kick out of watching the staff (and Seth got a free lunch for volunteering for the lifejacket demonstration). Apparently they do the drills once a week!

We blew through Wellington pretty fast, almost literally because it’s a super windy city. We met up with a friend that we met on the Milford Track who lives there and she took us to Zealandia to do a bit of a birdwatching. It’s another of New Zealand’s many eco-sanctuaries (maybe the biggest one?) and we had a renewed vigour for spotting birds because there were a ton of new species on the North Island that we hadn’t seen yet. Seth was hoping to see a North Island Saddleback, which we unfortunately didn’t see, but we did spot a Tuatara and a ton of other new birds. 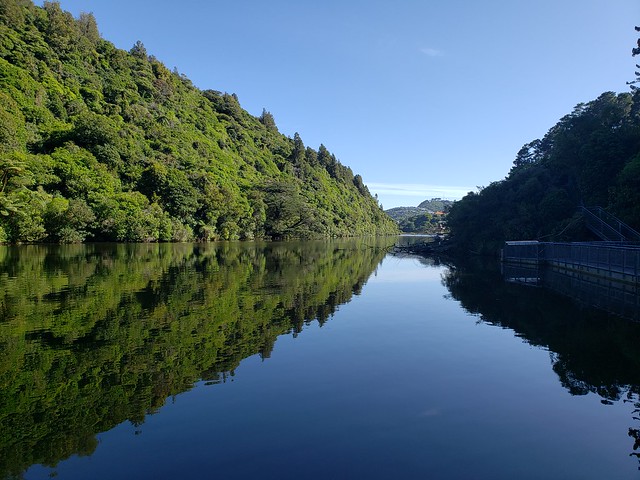 From there it was a windy drive to Tongariro National Park. The North Island was when we really got into the Lord of the Rings locations. I regret not going to the Weta workshop in Wellington, but Seth wrongly assumed I would know about it and sadly I did not. Anyways. Tongariro is the location of Mount Doom and Mordor and I was stoked to do the 20km Alpine Crossing.

The whole park is basically a volcanic wasteland with 3 major volcanoes in the park. The biggest of the three (and the largest active and tallest volcano in New Zealand) is Mount Ruapehu. Whahapapa Village is located in the middle of the park and the village is defined by the infamous Chateau Tongariro, which appears to sit right at the base of the massive volcano and housed many of the Lord of the Rings cast while filming. We’re not quite classy enough to stay there, but we did manage to score a place right next door at the Skotel Alpine Resort. It was around 4pm when we rolled into the hotel, but it’s located right at the trailhead to Taranaki Falls, so we decided to do a short hike to see the falls and do a bit of exploring around. 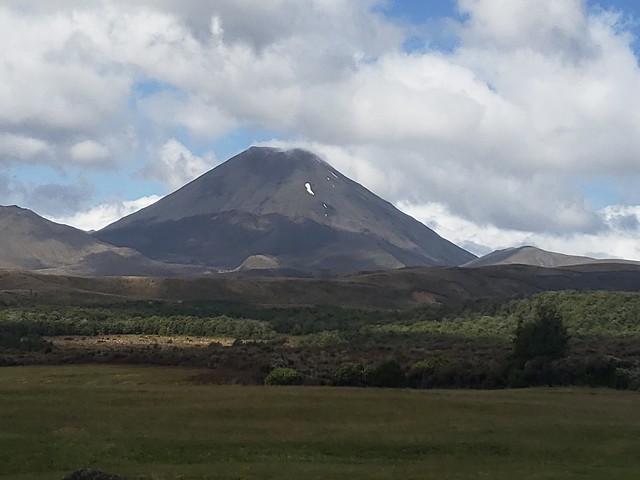 There’s some really awesome photos of Mount Ruapehu from it’s last major eruption in 1994-1995 and it has continued to be active sporadically throughout the 2000’s, causing its volcanic activation code to be elevated from green to yellow (I don’t really know what that means, but it doesn’t sound good). It’s pretty barren hiking around the park, but a lot of vegetation and low shrubs have grown in the area. It was a nice hike out to the falls. We had a quick glimpse of Mount Ngauruhoe, the second largest volcanic most well known for its depiction as Mount Doom, on the way in, but otherwise we didn’t see much on our hike because it had clouded in. Unfortunately it was also quite cold and we bundled up a lot.

We returned to our hotel to learn that our shuttle for the Alpine Crossing the next day had been cancelled. The temperature forecast along the trail was 0 degrees at the summit and was calling for 80km/h winds, so the park restricts the shuttles from running in those conditions. I was really disappointed at this announcement because I felt the weather was stymieing us at every turn. Granted we still managed to fit in all the activities we wanted to do, but I was constantly having to move things around and I’d had enough of the repeated disappointments. 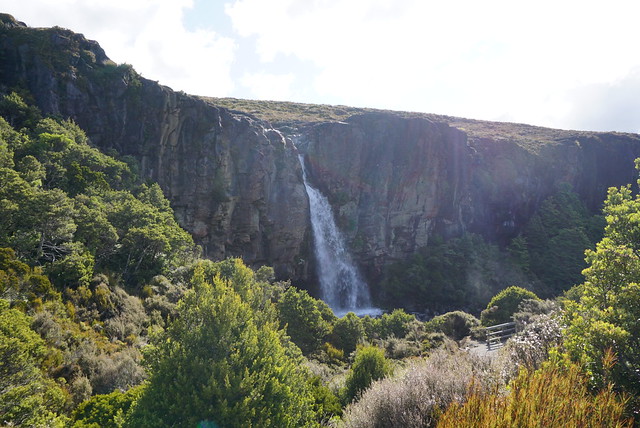 I was a little weary after my experience on the glacier to try and rearrange things for the hike, but I’m a persistent person and I decided to try anyways. Our next stop was going to be Taupo, but I hadn’t booked anything for it yet. It’s only an hour away from the park, so we decided to make a joint booking for jetboating and white water rafting and hope that we’d get a second chance at the Alpine Crossing a day later.

Seth was skeptical about jet boating. New Zealand is basically the birthplace of any extreme sport you can think of and is a paradise to adrenaline junkies. Jet boating is one of their claims to fame and is basically just riding around in a really fast boat with a big engine. I was curious to try it, so we drove out to Huka Falls to make a go of it in the morning. Both of us ended up loving it!! Seth describes it as a “water roller coaster” and you basically just do all these crazy donuts in the water. The driver pretends like he’s going to crash into all this debris in the river, but then does a crazy serve at the last second. It helped that our boat had a bunch of kids in the back who were having the time of their lives screaming at every turn. They really captured the spirit of the activity. The pictures look hilarious though because we didn’t have a full boat and Seth and I both wanted to sit on the edge, so we ended up sitting on opposite ends of the boat and everyone who sees the picture jokes you’d never believe we were on our honeymoon sitting so far apart! 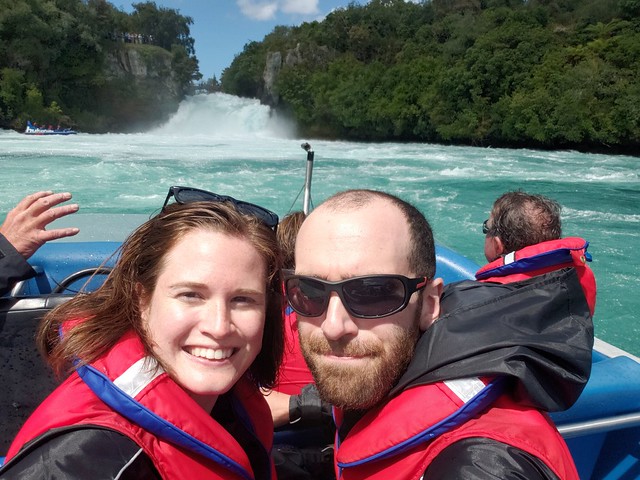 I’m a sucker for white water rafting and will take any opportunity to go, so I was really excited about rafting the Tongariro River. It has Class III rapids, which I’ve since decided are no longer quite adventurous enough for me (I like the thrill of the class IV rapids a little more), but I still had a great time on the river. We had a fun boat with two other young couples from Ireland and Sweden, and our guide was from BC. The river runs through a canyon for much of the rapids, so it’s really scenic and I liked how frequent the rapids were. We didn’t have to do that much paddling to propel us between rapids. 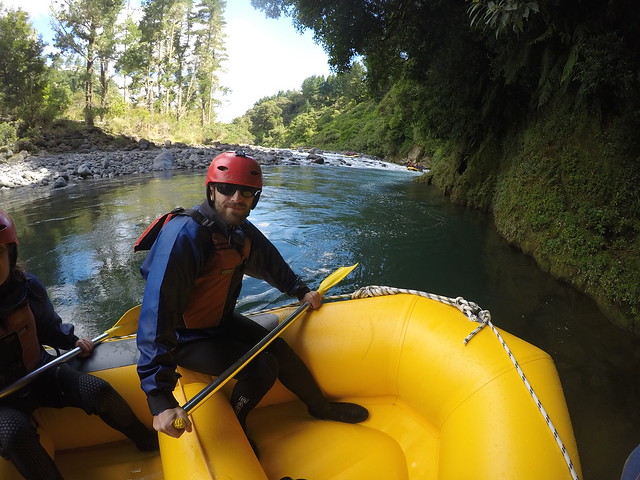 It was also wild how many Blue Ducks we saw on the river. Visiting the Tongariro River you’d never think they were endangered. The trapping programs have really been working and the rapids are just crawling with them. After the drought of blue ducks on the Milford Track, is was fun to see so many on the trip.

We finished the day off with a walk down to Taupo Lake and enjoyed a few beers along the waterfront. We re-booked on another shuttle for the next day and went to bed praying for a good day for hiking in the morning.