After hiking the Tongariro Alpine Crossing, we finally took some time to chill. We’d already burned up one of our days in Taupo white water rafting and we decided to explore all around the area on our way from Taupo to Rotorua. There are so many geothermal parks and wonders in the area, and none of it’s cheap, so it’s hard to know where to spend your time and money. A friend recommended Waimangu Volcanic Valley and we decided to just go with it and ended up having a great time! 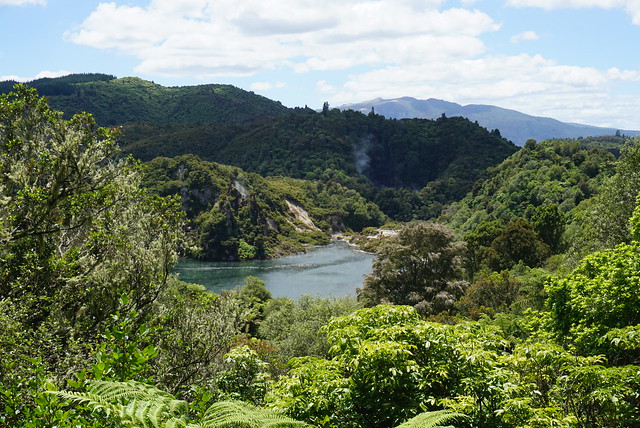 Waimangu Valley is the world’s youngest geothermal system and one of few (maybe the only?) whose date of birth is actually known. Mt Tarawera and Lake Rotomahana erupted on June 10, 1886, destroying all life within a 6km radius and birthing a new geothermal system in the valley. The valley has gone through many transformations since then – it was once home to the world’s largest geyser – but is now better known for its frying pan and terrace features. Its also ecologically important because it’s one of few places where you can see how flora and fauna have re-established in the area.

For a tourist, it’s basically a big valley with a walk running through it to all kinds of interesting geothermal features. The frying pan is the largest hot water spring in the world and runs a temperature of around 45 degrees. But my personal favourite was the inferno crater, which is a brilliantly blue hot pool almost 100 degrees in temperature. It was cool to see the hot rivers and springs flowing throughout the valley and the interesting terraces and formations that have been created from the mineral deposits in the river. We spent about 3 hours wondering around exploring the area. 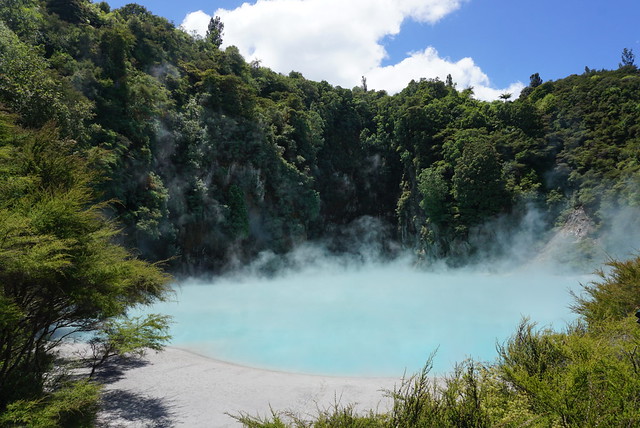 It was a hot day, so I wasn’t super tempted by all the hot springs in the area, but still wanted to visit at least one, so we decided on Kerosene Creek, which is a free, local hot spring. Word has definitely gotten around about the hot spring, but nothing compared to how busy they get in BC. There were quite a few people hanging out in the hot river and pool, but it was big enough that there was enough space to spread out. It has a nice little water fall before the biggest pool that you can soak your shoulders under.

After that we drove the rest of the way to Rotorua to check into our hotel for the next few days. There was a street festival on at the same time, so we dropped over to the market for a delicious dinner and then did some shopping. Merino wool is super popular in New Zealand, understandably since there’s so many sheep, but it is surprisingly expensive. A lot of it is mixed with possum wool and we did some shopping around to pick some items to bring home with us. 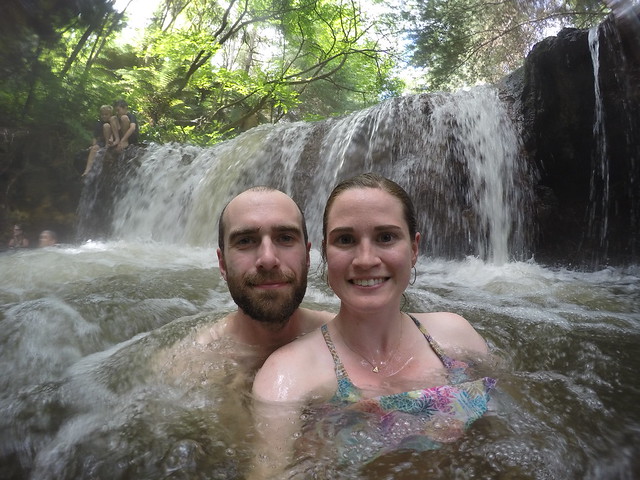 The next day we took in some of the cultural sites. Rotorua is home to a lot of different indigenous groups and we decided to visit Te Puia to take in a local performance. You can find Maori culture all over New Zealand and it was fun to learn about some of the local history and customs. Seth learned the haka with the men and I learned a few poi skills with the women. Te Puia is home to a weaving and carving school for Maori students, so we got to see artists working and some of their beautiful artwork.

The village is also filled with its own geothermal wonders. Well… all of Rotorua is filled with geothermal wonders. You kind of get the feeling that the earth’s core is almost trying to burst through the ground in Rotorua and that the crust must be extremely thin in the region. We went to Kuirau Park and for a walk along the edge of the lake and we were constantly running into warnings of dangerous thermal zones. All of Kuirau Park is dotted with fenced off areas where the land seems to be almost burning away, Although they have set up a nice foot spa in one area of the park with hot water piped to soak your feet. 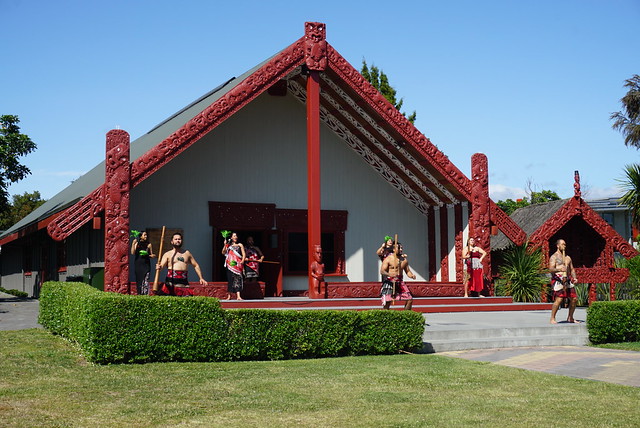 Te Puia is also home to another kiwi sanctuary and they regularly breed and release kiwi. They had 2 young kiwi when we visited and I’ve never seen them so active! They’re hoping to breed the two kiwi, but didn’t think they were going to be successful because the female really didn’t seem to like the male, which became very obvious when we entered the enclosure and the two were running around fighting something fierce (kiwi are very territorial). It’s unreal how fast they can move and we barely caught a glimpse of them! We returned later when they had calmed down and were able to watch one of them feeding.

Besides Te Puia, the rest of our time in Rotorua was dedicated to relaxing. I found a lovely little bookstore that I was thrilled to explore and we decided to treat ourselves to thai massages, followed by a soak in our hotel’s hot tub. I feel like maybe we should have visited a few more hot springs, but New Zealand was finally treating us to beautiful hot and sunny weather and we just couldn’t be bothered. Overall Rotorua is a bit on the smelly side (hello sulphur!), but it was fun to explore around for a few days. 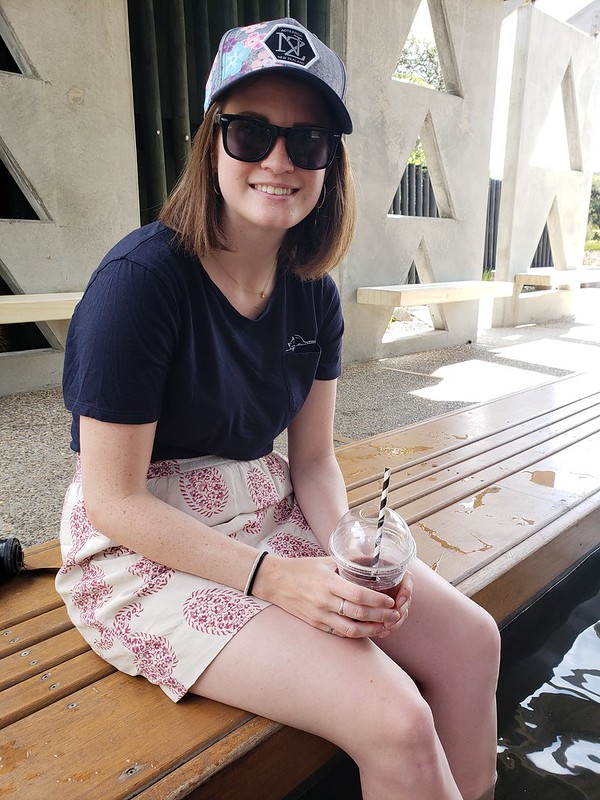 One thought on “Rotorua’s Geothermal Wonders”