Its been a while since my last update, but things have definitely not been uneventful! I wrote my last post just before boarding the night train from Sapa back to Hanoi and I was feeling on top of the world. But all the eating finally caught up with me and it was a long, rough overnight on the train.

I love trying new foods when I travel and Seth and I were definitely a little more adventurous than normal, thinking the last 4 years in Vancouver had toughened our digestive systems, but it caught up with us in our second week. We’re no strangers to travellers diarrhea, which is to be expected when you’re in a new place with different foods than you’re used to, but i definitely got full fledged food poisoning on the train to Hanoi. We’ve talked to a bunch of people since and everyone has one story about the time they got really sick (for Seth it was Peru, for me Malawi), but now it’s Vietnam for me.

I’ll leave out the gory details, but we were supposed to continue on from Hanoi direct to Ha Long Bay, which I was anticipating to be the highlight of the trip. But it quickly became evident that a 4 hour bus ride would not be feasible, so we unfortunately had to cancel our boat cruise of the bay and checked into a hotel in Hanoi instead. It was a hard choice to make, but it was definitely the right decision because I later collapsed in the hotel from what we think was dehydration and low blood sugar and Seth had to take me to the hospital. It was quite scary, but the staff at the hospital were fantastic and they took good care of me and pumped me full of fluids so that I could make a quick recovery and get back on the trip. I did recover relatively fast and we were able to catch our train to Phong Nha on time to get back on track with our itinerary. We just cut out the adventurous eating for a little while after that and there was a lot of yogurt, fruit, and steamed rice.

Phong Nha Ke-Bang is a national park located just outside Dong Ha. It’s a mountainous region known for its extensive network of caves (more than 300) and its karst topography. It’s also extremely gorgeous and had a totally different vibe than the other places we’d visited. Phong Nha is home to the largest cave in the world, Son Doong, and many other caves that make it a popular haunt for spleunkers. But there are 4 easily accessible caves that are frequented by tourists and we visited them all. 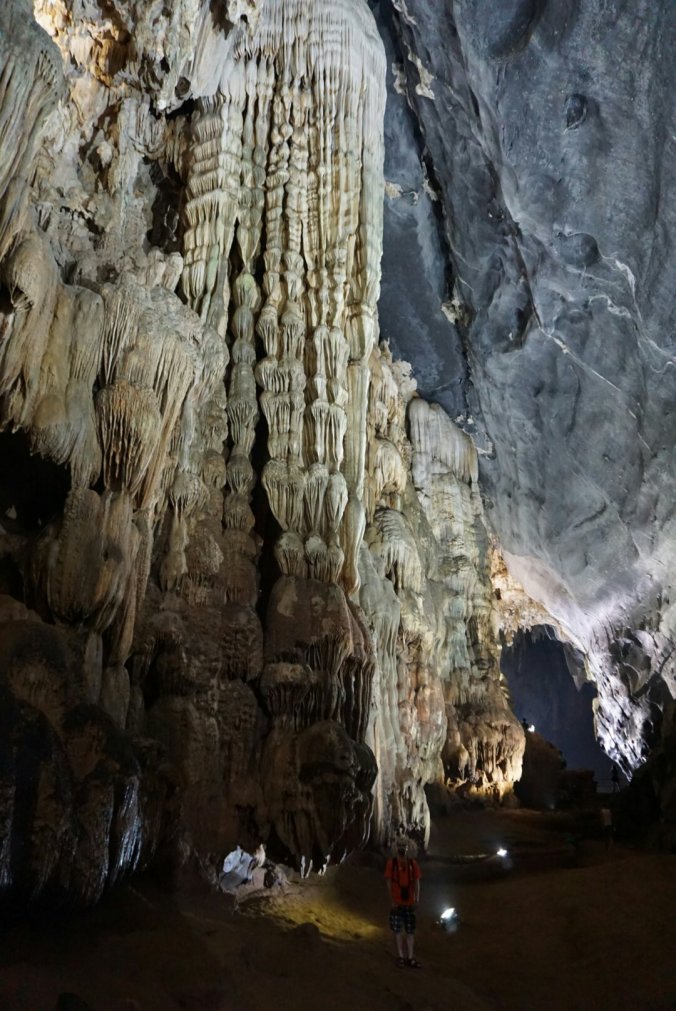 We started with its namesake cave, Phong Nha, and the nearby Tien Son Cave. We werent sure what to expect, but we were both really impressived with both caves. Phong Nha is accessible by boat, so we took a cruise on the river that eventually brought us through the cave. There are tons of stalactites and stalagmites throughout the cave, in addition to many birds and bats. Tien Son Cave is located in the same mountain, but at the top instead of the bottom where the river runs through, so we had to climb up about 500 steps to get to Tien Son.

I loved the views of the river and the park on our way up, but boy was it hot. Up until Phong Nha the weather had been a mix of clouds and rain, but that ended when we left Hanoi and it was cloudless, hot, humid days. It was normally around 35 degrees and several days went up to 40 with the humidity. It was rough on us Newfoundlanders, especially since I was still recovering from food poisoning. We both struggled with the heat in week 2, but it was still worth the climb to the top and Tien Son Cave was also gorgeous and it was much cooler in the cave, so that was a relief.

We had to start changing up our routine with the changing weather though. We started taking little siestas in the afternoon in our air conditioned hotel room to get some of our energy back. I’ve been to some hot places, but I can’t recall anywhere where the heat drained my energy so much as it did in Vietnam (I’m sure the sickness didnt help though).

On our second day in Phong Nha we did a full day tour of Paradise Cave and Dark Cave. Paradise Cave is known as one of the jewels of the park. It was only discovered in 2005 by a hunter and then opened to the public in 2011. It’s a 31.4km long cave that boasts some of the most incredible formations. We only visited the first kilometre, but it was breaktaking. In the first kilometre the cave is 30 metres wide on average and up to 80 metres high!

Dark Cave is the more adventurous of the 2 caves. You start with a zipline over the river to get to entrance of the cave and then explore the cave using only headlamps (all the other caves were lit). You walk into the mouth of the cave and then take a narrow side tunnel further into the cave. I dont really like being underground, so I wasnt sure I would like it, but it actually wasnt scary at all and the headlamps illuminate a lot. At the end of the tunnel is a huge mud bath, so we all had a laugh covering ourselves in mud. Then at the end of the tour you do a short kayak back to what the staff refers to as “water sports” but is a series of obstacles and attractions located over the river. Over all it was a great day and cooler since we spent most of it underground and in the water.

Sapa was still the highlight of the trip for me at this point, but Phong Nha was a new highlight for Seth, who had never been caving before, and he really enjoyed it.

Our next stop was Hue, but we decided to do a little stopover to the DMZ along the way. The DMZ is the ‘demilitarized zone’ of Vietnam where the border between the north and the south was created. It’s roughly along the 17th parallel and the border followed the river in that area, so friends and family on either side of the river were cut off from one another and the region was very heavily bombed. We visited the Vinh Moc tunnels and the border museum, walking across the bridge connecting the north to the south.

I knew tunnels were heavily used by Vietnam forces during the war, but I didnt realize that they were also used by communities in the DMZ who were literally forced to move underground to escape the bombing in the area. The Vinh Moc tunnels are a network of tunnels and 94 underground rooms that became home to 600 people! There were 3 levels of tunnels, ranging from 11 to 23 metres in depth. It was pretty unreal, the scope of the tunnels was impressive, especially considering the villagers had no experience in designing or building tunnels, and it’s hard to believe so many people lived in so small a place. The museum was also sobering and had some really interesting photos and artifacts.

We’re on our way to Ho Chi Minh City now, but more on Hue and Hoi An in my next post!