We not big city lovers overall, so we only planned for 2 days in Hanoi and then did a day trip out to Tam Coc before taking a night train up to Sapa for 2 days.

Tam Coc is about a 2 hour drive from Hanoi, but has dramically different landscapes. Hanoi and the surrounding area is mostly flat, but Tam Coc and Ninh Binh are popular for their mountains. The landscape is still pretty flat, but then these mountains just rise straight up, seemingly out of nowhere. There are no valleys, just sudden mountains and the contrast is pretty dramatic. I’m a mountain junkie since moving to Vancouver, so I loved the landscape. 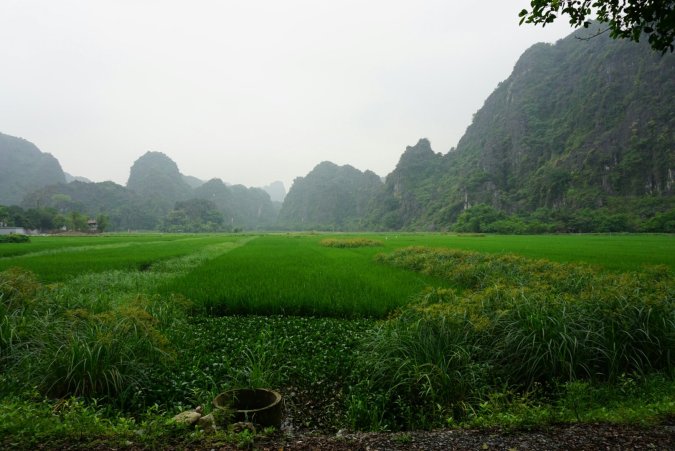 We visited two temples for the Kings Dinh and Le. We’ve only been here a few days, but I feel like we’ve already seen a million temples, but I learned the difference between a temple and a pagoda. Pagodas are for the worshp of the Gods (majority buddhism) and temples are for the worship of the kings.

The highlight of the day trip though was boating along the river. We went on a hour boat cruise that took us through the mountains and in some cases, under them. The river has carved alongside the mountains and created some pretty cool karst topography. We went through 3 caves, one of which was so long you couldn’t see the end when you entered and very obviously went under the entire mountain. It was very gorgeous, but it’s also highly commercialized and the crowds took away from it a little bit. April 30 and May 1 are both holidays in Vietnam for Reunification day and Labour day, and because they fell on a mon/tues, the Vietnamese had a 4 day weekend. So that meant a lot of locals were travelling as well, so Tam Coc and Sapa were both extremely busy.

The weather has been a bit hit and miss, but our timing has been good. We didn’t see the sun at all on our first 4 days and there’s been rain on and off, but it never lasts very long and with the exception of our second day in Hanoi, we’ve been lucky in missing the rain all together. It poured on our drive to Tam Coc, but it stopped just before we arrived and though the clouds looked a bit ominous all day, the rain held off for us.

Taking the overnight train was an interesting experience though. It’s an 8 hour train ride from Hanoi to Sapa, which is located in the far north, so we took the sleeper train from 10pm to 6am. The cabins each have 2 bunk beds and are extremely cramped. I was a little overwhelmed when we first got on the train, but fortunately our bunk mates were later showing up and we were able to get ready for bed and stow our bags before they showed up to keep things from being cramped. I was also worried I wouldn’t be able to sleep on a moving train, but we were exhausted after the day in Tam Coc and the rocking of the train is kind of soothing. So overall, a pretty good first experience on the train. We have to take it back from Sapa again and once more later in the trip, so by then we should be pros.

We’re still only 5 days into the trip, but so far Sapa has definitely been the highlight. It’s located in the far north and is a very mountainous region. It’s mostly mountains and rice terraces and is home to many different minority tribes. I booked the trip to Sapa through an agency, so I wasn’t sure on a lot of the details, but the hotel they booked for us was amazing! It had the best breakfast and our room had a balcony looking out onto the most amazing view of the mountains! Like I said, I’m obsessed with mountains and now Im in love with Sapa.

Again, the weather was a bit dicey when we arrived and it rained the whole bus ride into town from the station, but it mostly stayed away during the day. We met up with a group and did a short hike to visit 2 villages. The first was Cat Cat Village. Because it was a Sunday, all the girls were dressed up in their traditional dress and it was really cool to see all their vibrant clothes. Cat Cat village is like a huge tourist trap though and one of the funnier places I’ve visited. I feel like they took a few cues from Swiss Family Robinson, gave someone way too much creative license, and came up with some of the most hilarious tourist attractions I’ve seen! Everything was engineered using bamboo and built around the river. They had everything from bridges and water crossings, to giant homemade swings, see-saws, and even a ferris wheel. It was a little surreal, but we had a good laugh at it and people were definitely loving it.

My favourite part was the hiking though. Cat Cat Village is on the bottom of the valley and Sapa town is on the top, so we did some hiking through the trees and along the river to get between the two and I loved being out in nature, away from vehicles and crowds. It is exhausting because it is so hot and humid and there’s a lot of uphill, but I loved it. 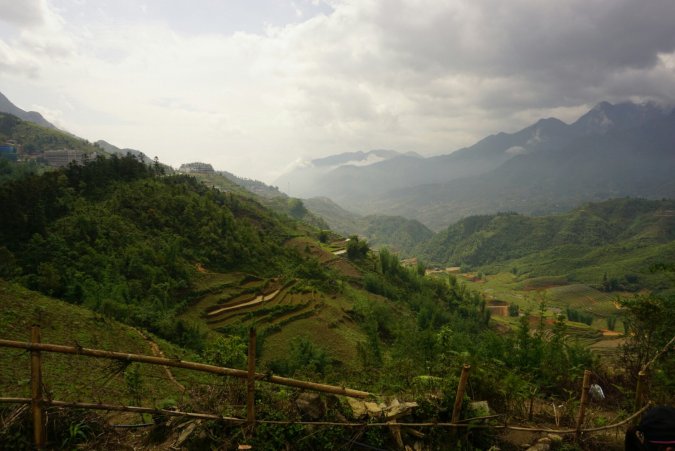 It was overcast the entire day, but I didnt mind it at all because the clouds and fog made for some gorgeous landscapes. Growing up in St. John’s, I shouldn’t have been as intrigued with the fog, but I couldn’t believe how quickly it would move in and out of the valley. One minute it would be totally clear, and then 10 mintues later the fog would roll in and you’d lose total visibility. We loved watching it though and had a fantastic supper in this restaurant overlooking the mountains and watching the weird shapes the fog would make.

The second day in Sapa though was the highlight. We finally saw the sun for the first time on the trip and it burned off the fog that was hanging around, making for a gorgeous, albeit extremely hot, day. We were picked up at our hotel by a woman from the H’mong tribe and she took us hiking for 6 hours to several villages along the valley floor. The scenery was so breathtaking, I am totally in love with the rice terraces!

We started hiking down to the valley along some pretty steep and slippery trails. Once we got to the bottom we hiked along and around the rice terraces and visited 3 different villages, stopping in one for lunch. It was oppresively hot and we were sweating so much, but it was so worth it. The only frightening part was the end, when we had to take a motorcycle taxi back to the hotel because it had been a 1 way hike. I rode motorcycles all the time in Malawi, but the traffic in Vietnam is frightening, so I wasnt in a rush to ride one. It’s like a quintessential part of Vietnam though, so now I can say I did it and hope this will be the only time!