As you may have gathered from my previous blog, we had a bit of a rough start to the Juan de Fuca trail. However, Day 1 was our longest day, so we were optimistic about Day 2. We aren’t the swiftest moving people in the morning, but we had everything packed up and ready to go by 10:30am the following morning and hit the trail. It wasn’t much improved over the day before and still had some pretty muddy sections, but we were well beyond caring and they didn’t slow us down too much.

We were excited to reach our first suspension bridge, which saved us from a long hike back across the river. There’s a few suspension bridges on the trail and they’re all quite large and impressive. We joked that the trail was so crappy and muddy because the park spends all the camping fees on really nice suspension bridges and boardwalks at the beaches for day users! 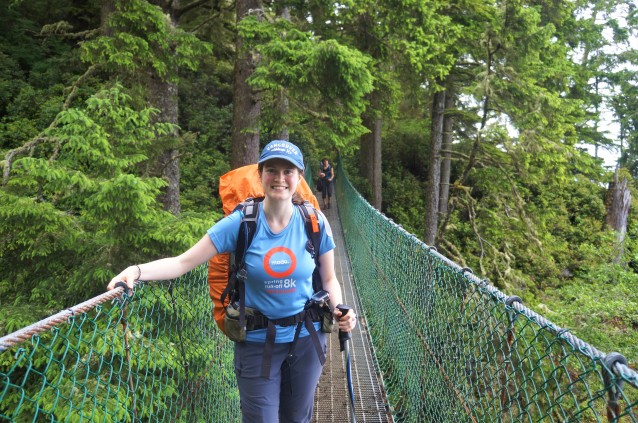 First suspension bridge of the day!

After about 3km on the trail we finally hit the coast. We stayed pretty close to the coast on Day 1, but there were no long beach sections. Sometimes we’d pop out on the beach for a minute, but the trail would always head back into the trees. So we were very excited to finally reach our first real beach stretch. The rocks and cobble are still hard on the feet and aren’t that easy to walk on, but we were definitely happy to have a break from the mud.

It’s not too far from Little Kuitshe to Sombrio Beach, which is the second and final bail out point on the trail. We walked along the beach for about a km before reaching the main part of Sombrio Beach where there is a parking lot and a campsite. It is a little disappointing to hike 18 km to a beautiful beach and then see day users who drove there. It takes away from the wildness of the trail and the feeling that you’ve reached a reward after a long day of hiking. But I suppose it’s also nice that everyone gets to enjoy such a beautiful place. 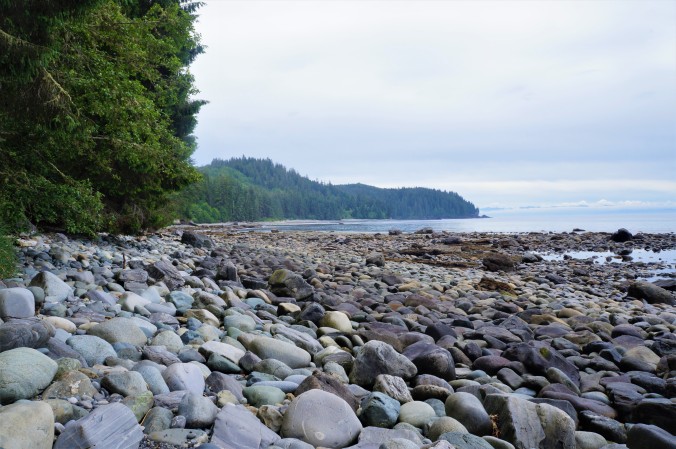 We crossed our second suspension bridge over Sombrio River and then continued further up the beach to stop for lunch around the 5 km mark. We had 12 km to hike on Day 2 – we were hoping to make it halfway before lunch again – but it was so nice on Sombrio Beach that we figured it was a good stopping point.

We experimented with some dehydrated dips from MEC for our lunches. I had a spicy southwest hummus and a three cheese bean dip that we just had to mix with water. While not the lightest, we’d brought pita to eat it with. I was impressed with the dips considering they were just powder and water. The hummus dip was actually the consistency of hummus, which I had been dubious about, and the bean dip had a nice flavor. Unfortunately, I don’t do great with spices and both of these dips were pretty spicy, so I won’t be buying them again, but I would recommend if you’ve got a better spice tolerance than me (which most people do). Emily’s opinion was that without the spice they probably wouldn’t taste like much of anything.

We hit the trail again around 2pm with 7 km left to do after lunch. It still wasn’t the best time, but we hoped we could keep up a 2km/hour pace for the rest of the day. Up until Sombio, the trail had been marked as “moderate” on our map. The 7 km section from Sombrio to our destination at Chin Beach was marked as “difficult”, so we weren’t really sure what to expect.

Unfortunately for us, this section did prove even more difficult than the previous day because it was not only muddy, but steep and muddy. We went back into the woods at the end of Sombrio Beach and were afforded some of the best views on the trail up to that point. We had a great view looking back up the beach and along the wooded coast. It was a bit surreal because we could see the entire way back to Port Renfrew and it was pretty impressive to realize we’d actually hiked the entire coastline. There’s a nice waterfall at the end of Sombrio Beach that we hiked completely around, including over the top of it, so it really added to the photos.

Waterfall at the end of Sombrio

The first 2 km out of Sombrio Beach were killer though. It started off with a small climbing section to get back into the woods. It was very steep and we had to take our packs off and hoist them up in order to climb up. It was just as muddy as the rest of the trail, but much steeper. There were several old boardwalk and stair sections, but they were almost completely deteriorated from use and made the trail even more difficult to navigate. Fortunately, it wasn’t raining, but there were some pretty sheer uphill sections covered in slippery mud, as well as some deep watery mud sections. Needless to say, we were soon covered in mud again and huffing and puffing as we (literally) pulled ourselves up the slope using tree branches, roots, and rocks.

We’d consulted our trail notes before heading into the woods and had been promised a flat logging road section in the middle. I’m pretty sure this was the only thing keeping us going because those first 2-2.5 km’s were just awful. I don’t think I’ve ever been as relieved as I was to finally see the logging road after hours of climbing. It was a little piece of heaven on the trail for us and it really did a lot to lift our spirits.

The logging road was pretty cool. Since it was a road (and not a trail), it had decent drainage and we didn’t encounter any mud along it. The trees are of course all super tall around the road, so it had a bit of a romantic feel at times and a creepy feel at other times. But it was long; it extended for the better part of 2 hours in long, straight sections. Around every turn we’d be praying it would continue and then we’d be so relieved to turn the corner and see it stretching ahead of us for another several hundred metres. I can’t recall what kind of pace we kept on the uphill section, but I know it was pretty terrible and the 2 km on the logging road definitely did a lot to improve our time.

But all good things must come to an end, which eventually our logging road did. Unlike the previous day, or even that morning, it was totally empty on the trail. We hadn’t passed a single person since we’d left Sombrio Beach and by the end of the day we would only pass one group of 2 guys. The trail was kinder to us after the logging road though and had a lot of gentle ups and downs along a much less muddy trail. The only downside was that the trail makers that had been consistently located at every km disappeared along this section of the trail. We’d gotten used to the presence of the trail markers, so it was very discouraging not to see any and we had been worried we were making exceptionally poor time.

Eventually we reached our third suspension bridge of the day (which was on the map and finally gave us an indication of where we were). Around this point I consulted the tide maps and started getting a little concerned. There’s several “tide cut-off” points located along the trail that you need to monitor because once the tides reach a certain height, the beach becomes impassable and you have the wait for the tide to go back down.

I had consulted the tide tables prior to the trip, but I wasn’t too concerned because they would only be impassable in the evenings and I’d been sure we’d be to the campsites long before it became a problem. There was one tide cut-off point right before our destination at Chin Beach that would be impassable after 7:30pm. We hadn’t been making the best time, but we were hoping to make it to camp by 6:30pm. This would give us enough time, but I’m a notorious worrier about this kind of stuff and since my tide tables were for Port Renfrew, I was concerned it might be slightly different at Chin Beach and I was terrified we would get cut off from the campsite and be stuck there until midnight when the tides went down.

Unlike me, Emily is not a worrier (or the biggest empathizer) and tried to tell me to get over myself, but I got quite the adrenaline boost in the last hour and pushed us along to our destination. At least it took my mind off my aching back and feet I guess.

We did make it to the cut off in time, but even Emily had to admit that it was pretty close. There’s sheer rock along the edge and we could see how far the tide was going to come up against the rock and it was getting pretty close to the rock when we arrived. But we had enough time and it was just a short 300 metre walk across the beach to the campsite.

Chin Beach was a much improved campsite over Little Kuitshe and had the benefit of being almost totally empty. We were the last (and only people) to enter the campsite from our direction, and there were 3 other groups up at the other end of the beach who were hiking the trail from the opposite direction. Since we were the only ones at our end, we found a truly amazing campsite and used 3 for ourselves. It had a beautiful beach view, a benched cooking area, firepit, and a nice sheltered area to pitch our tent. 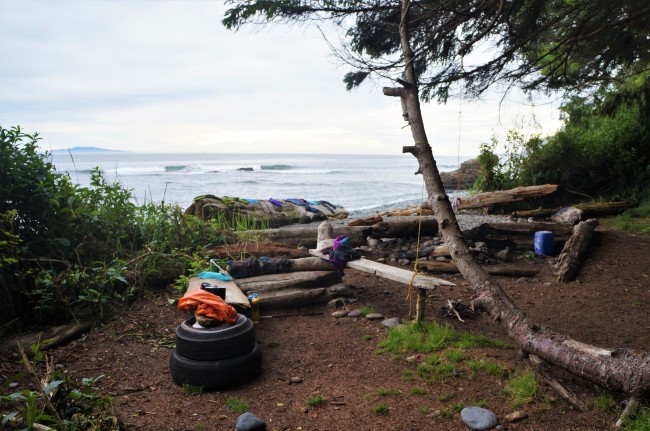 Thai sweet chili pasta was on the menu for supper and we enjoyed hot chocolate with a shot of fireball to warm us up as the sun went down (thanks Carolyn for this excellent idea!). We tried to get a fire going – actually we did succeed – but the wood was still too wet from rain the day before and we couldn’t get more than a smoke fire going. We enjoyed hanging out on the beach and watching the tide come up. We spotted several seals hanging out just off the shoreline and watched them for a while before hitting the sack to rest our weary feet!

Overall it was another challenging day, but it was also a much more rewarding day. The views were a lot better along the trail in this section and it was nice to camp on the beach and go to sleep to the sound of the waves against the rocks.