I shared an earlier post about the first half of my summer in BC, so here’s one for the second half of what has truly been an awesome summer!

Seth and I did a lot of camping in July in August. In hindsight, we probably would have preferred to do a little less camping and a little more hiking, but we still had a good time. Unfortunately, we got rained out on our first two camping trips. It only rained about 2-3 times during the entire month of July and it just happened to coincide with our camping trips! We were able to salvage some of our camping trip to Cultus Lake with an early morning hike of Teapot Hill. It’s named for an old teapot that was found at the top of the hill and if you hike there now, people have hidden dozens of teapots all along the trail, which makes for a fun scavenger hunt on the way up.

We had better luck in August and spent a weekend camping at Alice Lake Provincial Park near Squamish. We bought a rubber dinghy earlier this year and we finally got to take it out for a spin at Alice Lake. Alice Lake was much smaller compared to the other lakes we’ve camped at, but it was one of my favourites because it’s too small for motorized boats, so there’s no boat traffic at all. Our main motivation for staying at Alice Lake though was to cut off some of the drive to Joffre Lakes Provincial Park, which is a hike that has been recommended to me by pretty much every avid hiker I talked to throughout the summer.

Joffre Lakes is located outside Pemberton, which is a three hour drive from Vancouver, and features three alpine lakes nestled under Matier Glacier. It’s an 11km roundtrip hike up into the mountains, which seemed like a walk in the park compared to our 20km hike to Garibaldi Lake. We both loved Garibaldi Lake, which ends at a beautiful glacial lake, but has a long 7km trek up continuous switchbacks to get to the view. I loved Joffre Lakes because the entire hike is incredibly scenic, not just at the end.

The hike starts at the first lake and then hikes through a boulder field up to the middle lake. The middle lake provides a great view of the Matier Glacier and there’s a beautiful waterfall flowing down from the upper lake. When you reach the upper lake, you can look straight across to the glacier. If you continue around the lake, you can actually camp on a huge rock located right under the glacier and you get a great view of the rest of the mountain range. It was a great hike, but it’s definitely worth it to get there early in the day, because everybody else loves this hike too. Parking was insane off the side of the highway and the crowds of people on the trail were at times a little overwhelming. Otherwise, I would highly recommend this hike! 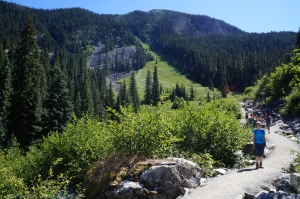 Some of other highlights of my summer included a Vancouver Canadians baseball game, the annual Celebration of Light, and of course, more hiking. The Vancouver Canadians are the Toronto Blue Jays affiliate team for the Northwest Minor League. We found a great groupon and both attended a game for just $14! They play in Nat Bailey Stadium, which is just a bunch of bleachers behind home base, but it felt very old school and we had a blast. 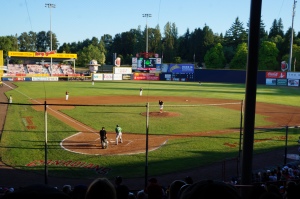 The Celebration of Light is an annual fireworks competition that takes place over English Bay in late July. Every year two other countries compete with Canada to put off the best fireworks show. We decided to go watch Brazil’s fireworks display, which consisted of a 30 minute show choreographed to music. There were all kinds of activities beforehand and we had fun watching some Brazilian samba dancing, Capoeira (a Brazilian martial art), and the SkyHawks, an awesome Canadian parachute stunt team. The fireworks display was amazing and next year we’ll have to try and catch Canada’s contribution. 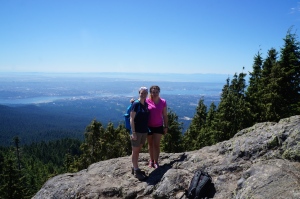 We ended off the summer with a trip to Vancouver Island for the first time since we’ve moved to Vancouver (and embarrassingly, my first time ever). The main purpose of the trip was to visit Victoria, but we camped outside the city in Goldstream Provincial Park to save money on a hotel. We didn’t spend too much time at the campsite, except to sleep, but we did do a nice roundtrip hike of the park. Goldstream River is named for the gold that was panned from the river during the gold rush and over the weekend we learned more than I thought there was to know about the gold rush.

The Goldstream hike takes you past an old goldmine cave that you can crawl into and up to an old railway trestle that crosses a huge gorge. It’s abandoned now, so you can walk along to the middle of trestle, which offers a pretty terrifying view down to the river at the bottom. We stopped at a few waterfalls along the way, the most notable of which is the very tall Niagara Falls. It’s a thin stream of water that flows down from the mountains, but it’s so named because the waterfall is actually taller than Niagara Falls! We finished the hike with a walk along the river which is very popular in the fall when thousands of salmon crowd the river to spawn. 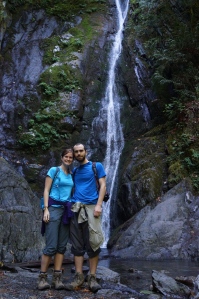 Victoria was a very nice city. It reminded me a little bit of St. John’s because everything in Victoria is much older than in Vancouver and many of the buildings were built in the late 1800’s and early 1900’s. We spent the morning at the Royal BC Museum, which had a great exhibit on about the gold rush, as well as their permanent exhibits about BC’s European and First Nations history, as well as BC’s natural history. My knowledge about BC’s history is a little lacking, so I definitely learned a lot.

We continued our education in the afternoon with a walking tour of Victoria. Our tour guide was excellent and we learned all about Victoria’s story – the many people that have passed through the city and the history of many of the buildings around the inner harbour. We always knew that New Westminster was the former capital of BC and that Victoria was the former capital of Vancouver Island, but our favourite story was when we learned how Victoria stole the title of BC’s capital from New Westminster.

On the day of the vote for the capital, the Victoria delegation took the man who was going to give an impassioned speech in favour of New Westminster out for breakfast. They knew he had a weakness for gin, so they graciously supplied him with gin throughout breakfast until he was so drunk that when we got up to give his speech, he ended up stumbling through the first page 3 times before being taken away for drunkenness. Without his strong plea for New Westminster, Victoria was able to steal the vote and secure itself as the BC capital! Seth loved the story because it seems like the kind of half-brained plot you’d see fail in a movie, not actually succeed in real life.

Victoria has so many attractions that we had a hard time fitting them all in. We spent an evening at beautiful Butchart Gardens and a morning at the Butterfly Gardens. We drove to the top of Mount Douglas for a great view of the gulf islands and did a little hike up Bear Mountain for a nice view of Vancouver Island. We finished the trip with a stop at Sea Ciderhouse to sample some local made cider and go on a tour of the ciderhouse. It was a gorgeous day and we enjoyed a flight of cider outside on the deck before catching the ferry back to Vancouver. Even the ferry was a thrill and we saw an orca mama and baby duo swimming in front of the ferry on the way back!

After a long, hot, and dry summer, fall is finally catching up with us. It was still quite warm in September, but there’s definitely a chill in the air and we finally got some rain to fill up our reservoirs. Apparently it’s a super el-nino year, so we’re expecting another mild winter. I’d love to have snow to go skiing, but if we don’t get any, we’ll probably just continue our tour of BC’s wilderness by hiking!

@instagrant.ob looking smug atop The Chief.
Two Guiders braving the rain!
Third year in a row camping in the rain in Golden Ears - still beautiful though! Maybe next year I'll get sun. 🤷‍♀️
It's that beautiful time of year when everything is green!