This past weekend, I met up with three of my friends from MUN in Edinburgh for a mini-break! Lisa and I travelled up from London, Helena flew in from Amsterdam, and Erin took the bus from Aberdeen. I loved exploring Edinburgh with these girls and we had a great time!

We kicked off the trip with a 3 hour walking tour around Edinburgh so that we could figure out what we wanted to see in the next few days. Our tour guide, Izzy, was incredible and spiced up what might have been a boring history lesson into an afternoon of hilarity! Lisa and I kept bursting out laughing at her references to “Ninja Scots”, who climbed the castle walls several centuries ago, and “Disco Dolly”, the first cloned sheep who now resides in the Museum of Scotland.

Izzy took us to St. Giles Cathedral and told us all about the gruesome public punishments that took place in the square. She took us to Edinburgh Castle and George Heriot’s School, which are thought to be inspirations for Hogwarts. She took us to the graveyard where Greyfriar’s Bobby is buried, the little dog who sat waiting on his owner’s grave for 14 years. And finally, she took us to Princes Street Gardens, which is now a beautiful garden, but was once used for sewage drainage and was known as the ‘Lake of poo’. It was definitely one of the funniest historical walking tours I’ve been on and I thoroughly enjoyed it!

After the tour, Izzy managed to rope us into buying tickets for the nightly ghost tour and brought us to a pub where we could get a traditional Scottish meal. This means that I finally tried haggis, something I’ve managed to avoid up until now. Haggis is made of sheep’s liver, heart, and lungs, and is cooked in the sheep’s stomach. I was anticipating something really nasty, but if you don’t think too much about what you’re eating, it’s pretty good! Lisa had a quarter chicken stuffed with haggis, which was particularly tasty, and Helena kept it pretty tame with fish and chips.

Erin met up with us in the evening and we headed off on the ghost tour. Surprisingly, the ghost tour was pretty creepy! Our guide told us several old ghost tales, mixed with modern day stories about a real-life Scottish vampire. The tour ended in a mausoleum; by this point, Erin had definitely had enough of hanging out in graveyards, so we headed out to our favourite late night pub, the Bank Bar.

On Saturday, we took a day trip out to Sterling Castle and Loch Lomond. We drove through the Scottish Lowlands to Stirling Castle, which is situated high atop a hill, looking out over the fields. It was still pretty early when we arrived and the fog had not quite lifted over the hills, so we had a great view from the castle! Looking out you can see a tower memorial for the great William Wallace. We stopped in a small village, Aberfoyle, for lunch and then we entered the Scottish Highlands and came to Loch Lomond.

By the time we arrived at Loch Lomond, we were all pretty giddy from our large lunch, so we missed the turnoff for the viewpoint on our way around the Loch. We found the end of the trail on our way back, so we walked up to the viewpoint, only to go in the wrong direction on the way back down! We ended up in the middle of the woods and after going halfway down (and realizing there was quite a steep slope between us and the bottom) it was too slippery to go back up, so we had to slip and slide our way down to the bottom! Lisa made sure to capture every moment for us though!

On Sunday, we decided to make up for everything we’d eaten over the past few days by hiking to the top of Arthur’s Seat. Arthur’s Seat is an extinct volcano just outside of the city centre. For some reason we didn’t think it would be a very strenuous walk, so we didn’t really dress properly and we were all huffing and puffing by the time we reached the top! We frequently stopped to rest and ended up spending 10 minutes judging all the other people walking up, who were at least in worst shape then us. We didn’t realize we were doing this at first and had a bit of a laugh when we realized how ridiculous we were.

It was a pretty steep climb up, but the view at the top was totally worth it! You get a 360 view of the city and you can see all the way out to the ocean, which isn’t visible from the city centre. It was also the perfect day for a hike! It was pretty warm out, so we finished the hike with a little picnic outside a café (mostly because we were too cheap to pay the extra pound or two that it costs to eat in the café). 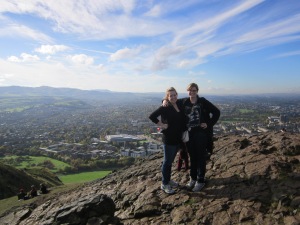 The top of Arthur’s Seat

Erin and Lisa left around suppertime on Sunday, but we made one last stop at the National Gallery before we parted ways. We figured it would be good to get a little bit of culture, but we ended up just challenging each other to see who could find the most ridiculous painting in the Gallery! Art lovers, beware. Helena and I finished off the day by gorging ourselves on pasta, pizza, and dessert at a restaurant near our hostel.

On our last day, we decided to check out the National Museum of Scotland and do a bit of shopping. The museum reminded me of the Natural History Museum in London. They have all kinds of great exhibits on Scotland, along with an animal exhibit and one on different cultures. We made sure that we got a picture with ‘Disco Dolly’, the museum’s famous resident! We finished off the trip with a bit of shopping and lunch at The Elephant House. 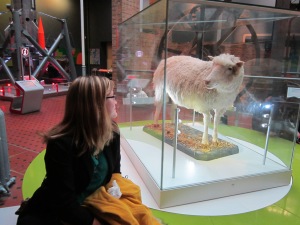 Having a moment with “Disco Dolly”

The Elephant House is a small café in the city centre that has become famous for being ‘the birthplace of Harry Potter’. Apparently JK Rowling used to write in the café when she lived in Edinburgh and first started writing Harry Potter. It has a fantastic view of Edinburgh Castle, which is one of the reasons it’s suspected that it might have been one of her inspirations for Hogwarts.

Surprisingly though, our favourite part of the café was the washroom. All of the walls have been covered over the years with messages to JK Rowling from all her Harry Potter fans! We must have spent a half an hour reading all the “thank-you’s” and Harry Potter quotes that people had left over the years. It made us incredibly happy to both leave our own messages to JK Rowling, thanking her for making our childhoods wonderful and for giving us such a magical world to grow up with!

Lunch at The Elephant House

In conclusion, it really was a wonderful trip and was made so much more wonderful by the amazing girls I got to experience it with! Scotland is very beautiful and I would definitely like to go back some day and explore more of the country. For now, I’m looking forward to the first weekend in November, when Helena comes to visit us in London and we get to do it all over again!

As much as I dig the moody cloud photos, I love how vibrant the Atlantic is in the sun!
Another day, another coastal hike 😊
Excellent location for a lunch break!
Continuing my tour of the East Coast Trail. These views never get old!