I’ve been saying this for ages now, but I want to start writing more about the outdoor adventure experiences I’ve been having in BC over the last 5 years. I haven’t done a lot with this blog over the past few years, except for writing about my occasional vacations, but I’ve been writing a lot on my second blog, which is a book blog (check it out here). I’ve developed some better writing habits, so I’d like to try and focus on writing more on this blog and perhaps reorganizing some of my content to make it a bit more of an adventure blog. I’m sure I’ll still post about travel when I get the opportunity, but those trips just aren’t as frequent as they were when I was in University and hopping off somewhere new every 4 months.

I’ve hiked over 100 trails in the past 5 years and would love to write about some of those trails. Since it’s winter, I’ve decided to write a few posts on some of my snowshoeing adventures and do a little ski series to motivate myself to write more. I’ve skied most of the local mountains in Vancouver and have made a ton of trips to Whistler, but I also go on an annual ski trip to the Interior every year. This tradition was born in 2016 because the Easter holidays that year were in March and I wanted to make use of the extra vacation days. My original plan was to spend the weekend at Big White Ski Resort with Seth and my best friend and her boyfriend, but I ended up getting an awesome deal on a condo that could sleep 10 people and we decided to fill it with some of our other friends. 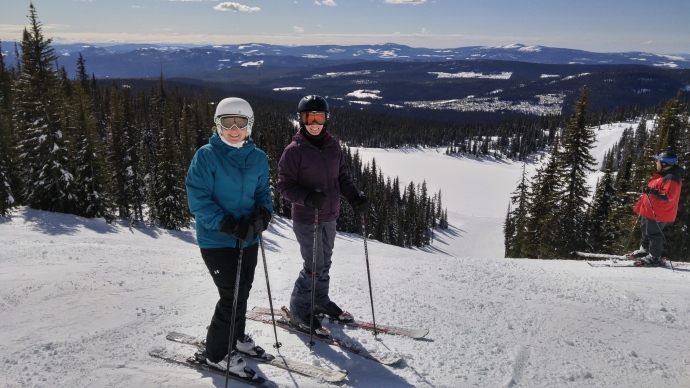 Since then, we’ve gone to a different ski resort every year, but Big White still sticks out as being one of my favourites. It’s located just past Kelowna and is about a 5 hour drive out of Vancouver. Because of Easter holidays, we left on Good Friday morning and arrived mid-afternoon, but every year since we’ve left after lunch or after work. Our condo was located right on the mountain with ski out access and we had this huge window seat in the living room looking out onto the ski slopes and surrounding mountains. The resort also had a huge group hot tub and we spent a lot of time chilling in the evenings.

On top of the awesome accommodation, we also had excellent conditions. It was sunny the first day and we had some amazing views. It clouded over in the afternoon and snowed all night and into the next day, so even though we didn’t get the views on the second day, we got some really awesome powder. Big White’s tagline is “It’s the Snow”, and I would have to agree because it had some of the best snow conditions and is the latest in the season that we’ve ever gone skiing.

One of the things I liked most about Big White, which I don’t think has been replicated at any of the other resorts I’ve been to, is that the slopes go right through the ski village. Until I started exploring some of the resorts outside Vancouver, I didn’t realize just how many ski hills there actually are in BC and was surprised to learn that not all of them have villages. This has made it a bit of a struggle when planning our trip in later years because we really want to go somewhere with group accommodations and a fun atmosphere, but sadly some of the resorts just don’t seem to offer much on-mountain accommodation.

But we were located right in the village at Big White and there were several fun places to explore around. We had dinner in the village one evening and made our own meals other nights. It’s always so surreal driving out to the Interior (and really to any of the mountains in the lower mainland) because the conditions change so much on the way out. It was late March, so we didn’t really see any snow on the drive out to Kelowna (except on the Coquihalla) and it was pretty bare most of the drive up to Big White. But it was a huge contrast because the mountain ended up getting so much snow on our second day skiing and overnight, that the drive was totally transformed on the way out. We ended up having to shovel our vehicles out after a pretty heavy dump overnight and the plows were busy running the mountain road down to Kelowna all morning on our way out.

Big White is a huge mountain and has a ton of trails. I took a look at the ski map to jog my memory and I don’t remember it being quite as large as it actually is. I’ve definitely become a better skier since 2016 and I’m wishing I could go back and try out some of their glade runs. Overall the mountain has a nice mix because there are several big chairs running the whole length of the mountain, as well as several smaller chairs just running to the peaks. The Gem Lake Express Chair is quite separate from the rest of the mountain and this is where we spent almost our entire second day doing powder run after powder run.

Overall, we had such a great time at Big White that it inspired us to check out a different mountain every year, and we have our 4th annual trip coming up in a few weeks! Our group has grown and we’ve worked out a lot of the details of the trip down to a pretty precise science and have developed a lot of traditions that we keep going every year. It’s always one of the highlights of my winter season.