I’m almost caught up to this year with my ski trip posts, but one more to go before I can write about this year. In 2016, we spent Easter weekend at Big White and in 2017, we spent St. Paddy’s Day weekend at Sun Peaks. In 2018, we decided to time our trip with the Family Day holiday in order to make use of the long weekend and take less holiday time. Similar to our trip to Sun Peaks, most of our party drove out after work on Friday, but I decided to make it a half day again to avoid driving out in the dark. This year we went just before Valentine’s Day, so we had a bit of a Valentine’s party when we arrived. Since I’m always one of the first people to arrive, I’ve started a bit of a “welcome drinks” tradition, with green drinks for St. Paddy’s day in 2017 and pink drinks for Valentine’s day in 2018.

In more recent years we’ve had a harder time picking a resort because our group has really grown and a lot of the resorts don’t have group accommodations available on site. We’ve been wanting to go to Revelstoke for several years, but we just can’t seem to make it happen because of the accommodations. In 2018 we decided to rent two condos at Silver Star to accommodate what ended up being a group of 13 people. It did create a bit of a different vibe being separated into two groups, but both condos were located on the same floor, so we dragged the table from the smaller condo into the bigger condo so that we could all eat together. The added benefit with two condos was also that we had two hot tubs!

Silver Star has a pretty small ski village, but a lot of the accommodations border the slopes, including ours, so we had excellent ski-out access. What’s interesting about Silver Star is that the mountain is very clearly delineated between the “front side” and the “back side”. The front side is pretty clearly divided into 3 sections, two upper slopes and one lower slope, while the back side just has one main lift. I wish I could comment on the back side of the mountain, but I didn’t ski a single slope of the backside. The entire back side of the mountain is all black diamonds serviced by one lift. I’m not a high risk taker when it comes to skiing, so I tend to stick to blue and green runs on bigger mountains. That said, Silver Star is a smaller mountain and none of the slopes were that intense, so I think I probably would have done okay on the black diamonds. But some of our group tried one run on the back side on the first day and said the snow was awful and icy on that side of the mountain because of the cold conditions leading up to our trip, so I decided to skip it.

The other side of the mountain was a different story. Like I’ve said in some of my other posts, the direction of the slopes and the sun can make a huge difference on the quality of the runs. Our first day skiing Silver Star was absolutely gorgeous, with sun and blue skies the whole day! For this reason, I had a blast skiing the front side of the mountain and thought the conditions were pretty good. We started on the Comet Chair and I absolutely fell in love with this part of the mountain. The Trails were in great shape and the trees are pretty spacey in the upper area, so it’s really easy to do some fun glade runs. I honestly could have spent most of the trip on this chair and I would have had a great time!

The major downside to going skiing on the family day weekend is of course, the crowds. Silver Star isn’t the biggest ski resort, so the line-up for the Comet Chair was pretty huge and annoying to wait in at times. I was willing to wait because I enjoyed the runs so much, but a lot of the group didn’t want to waste the day in the line-ups, so we moved on to the Silver Woods chair, which is located on the lower section of the mountain. This part of the resort was okay, certainly better than the backside, but the elevation was a little bit too low and the conditions were not really good down there either. I did spend some time there and did most of the runs because they are shorter, but eventually we split into two groups, with one group staying on the lower runs, while I decided to join a group willing to wait for the Comet Chair.

Later in the day, we decided to give the Attridge Chair a try and I ended up spending the rest of the first day and a good portion of the second day on this part of the mountain. It was much less busy, but still had pretty good snow conditions. The slopes were a bit more technical on the Attridge side, but again, the trees were pretty spaced out, so there was lots of room to explore and try some new things. There was a lot of powder on this part of the mountain, so I took the opportunity to work on my powder skiing. I found it more challenging, but it was the good kind of challenging that makes you a better skier. I ended up having a pretty good time trying out some new runs and learning some better control on my skis. That said, at the end of the day, Comet Chair was still my favourite!

So it was a bit of a mixed bag at Silver Star in that many of the runs weren’t in great condition, but a lot of them were fantastic. There was the downside of huge crowds at the Comet Chair, but if you are willing to try some new things and check out the other parts of the mountain, the lift waits weren’t actually that bad. With 13 people, we didn’t ski together as a group, but I did a lot of hopping around between groups and I think I found a pretty good balance. A lot of people are definitely more adventurous than me, but my skiing is good enough that I can hold my own with most of the skiers and take the opportunities to get a little better myself. Good powder conditions definitely helped improve my confidence on Attridge Chair, whereas I was less inclined to take risks on the icy conditions.

We’ve kept our traditions going and I cooked Jiggs Dinner for the group again! It’s definitely a lot to manage, cooking for so many people, but it’s one of the few times I get to eat Jiggs Dinner throughout the course of the year, so I’m willing to keep doing it. I love coming together with friends over food, and when you’re the chef, there’s the added benefit of never having to do the dishes!

As a word of warning, Silver Star Ski Resort is located just outside of Vernon and can be reached from Vancouver traveling through either Kamloops or Kelowna. We drove through Kamloops on the way there and Kelowna on the way back. They are pretty much the same distance, I think driving time just varies depending on traffic and weather conditions. Having driven both routes, I would definitely recommend driving through Kelowna. It’s mostly highway driving with multiple lanes, which Kamloops to Vernon is not, so it makes for a nicer driving experience. 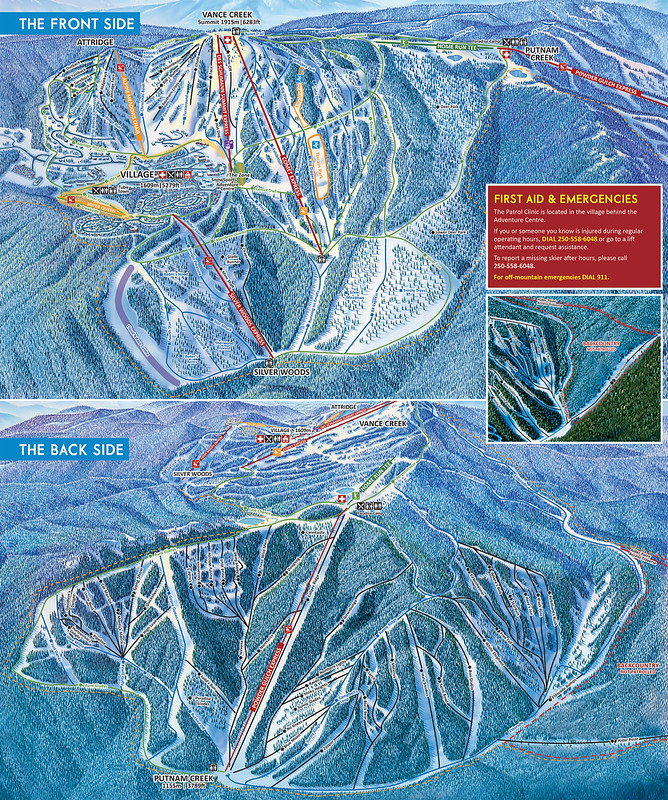