It’s been a whirlwind first few days in New Zealand. It was our second time crossing the dateline, but I still can’t get used to losing a day as soon as you take off from Vancouver. Our first flight was 15.5 hours to Sydney, then we had a short stopover before another 2.5 hour flight to Auckland. We arrived at 6pm, but it still took us about 2 hours to get out of the airport.

New Zealand takes its biosecurity very seriously. I can’t blame them being a nation island with a unique and sensitive habitat, but it was definitely cumbersome. We had to declare our tent and hiking boots, which meant a long wait in the “something to declare” line up, followed by an even longer wait in the “camping equipment inspection” line up. They gave our boots a pass because they were pretty clean, but our tent had to go through this quarantine thing for 10 minutes. Not sure what they did with it, but we were relieved when we got it back and we could finally leave the airport. 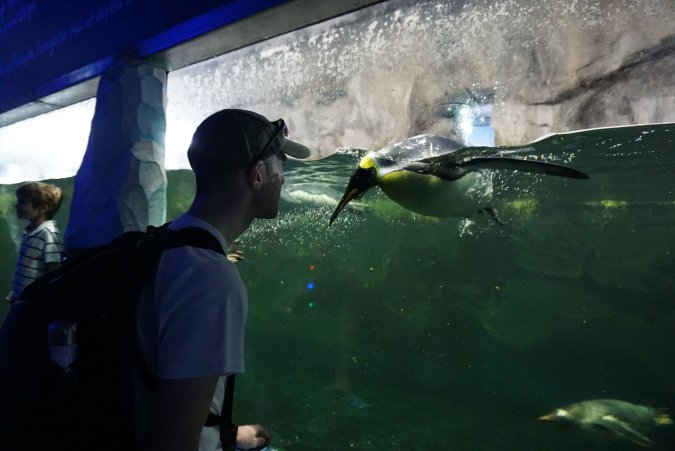 It was after 9pm when we finally got to our hotel, so we pretty much went to bed right away, but we did enjoy a nice balcony view of Auckland that we didn’t know we would have.

Despite the long journey, we were up pretty early. New Zealand is 21 hours ahead of Vancouver, but I prefer to think of it as 3 hours behind and a day ahead. So the time difference doesn’t actually feel like that much and we were up and ready to go by 8. We took the bus to Kelly Tarlton’s Sealife aquarium to start the trip. Our first discovery was that the buses are really expensive here. It was $3.50 each just to ride 3 stops downtown, and then $5.50 each when we transferred to the bus that goes to the aquarium (you have to pay separately for each bus segment). But totally worth it because the aquarium was awesome! 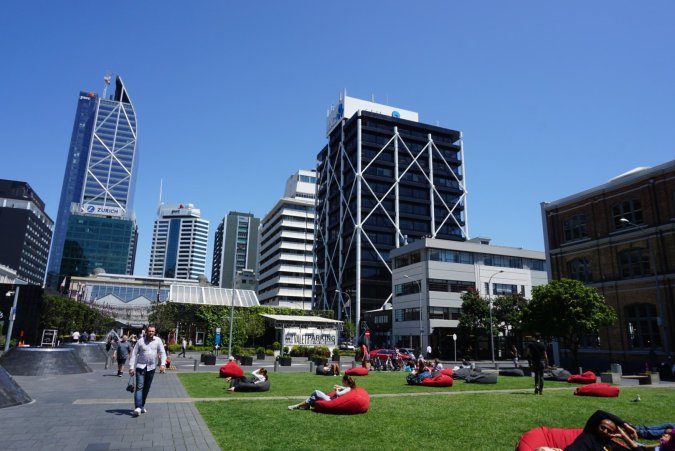 First they have a short exhibition about early exploration in Antarctica and then you enter straight in to the penguin enclosure. You can watch the penguins swimming around under the water and then come up and watch them hanging out on land. The water part was my favourite because they’re super playful and were interacting a lot with us through the glass. They had two kinds of penguins: King and Gentoo. Some of the Gentoo had little rock nests and we saw two that were actually sitting on eggs.

After the aquarium with did a bit of exploring in the downtown area, which is really nice. We discovered a little square with a bunch of food trucks and tons of bean bag chairs where you could eat and hang out in the grass, which we did. There were a few seagulls hanging around looking for food and we got a kick out of them because they were the tiniest little gulls ever. According to seth they are the same size as a pigeon. 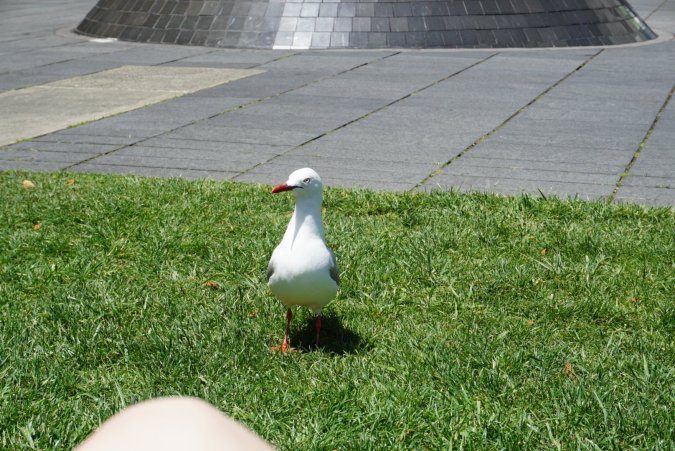 We didn’t spend much time in Auckland – less than 24 hours, but I did really like it. It had good vibes. There are lots of trees around and I liked that most of the waterfront is open to the public. I hate when cities just use the waterfront for industrial. Things are pretty expensive though. Food is definitely more expensive, although I have to keep reminding myself that our dollar is worth about 10% more. It doesn’t account for the whole price difference, but it’s nice to have your money worth more for a change.

The reason we spent so little time in Auckland is because we had a flight to catch later that day to Great Barrier Island. Auckland is surrounded by the Haruki Gulf, which is very well known for its beauty and wildlife. There are several different islands located in the gulf near Auckland, one of which is Great Barrier Island. I understand now after having traveled to GBI that it’s not super popular on the normal tourist route, so I’m not quite sure how I stumbled upon it, but I’m so glad I did and that we decided to visit. The island is a short 30 minute flight away, but it’s pretty remote and there’s no electricity on the island. Everything seems to be powered by solar and a lot of people collect rainwater in tanks for their water use.

We flew out in the afternoon on one of the smallest commercial flights I’ve ever been on. It seated 12 people plus the pilot, but it was a beautiful day and we got the most amazing views of the gulf on the way over. There’s no paved runway and you land right on the grass. Plus the airport is a tiny one-room building with no security to speak of. So as soon as you land you definitely feel a distinct slowing of pace and real island life vibes.

We had booked a rental car, so the info guy at the airport sent me walking down the road to pick it up. New Zealanders drive on the left side of the road, so this was a real test for me. I’m just glad my first experience was in such a small place. 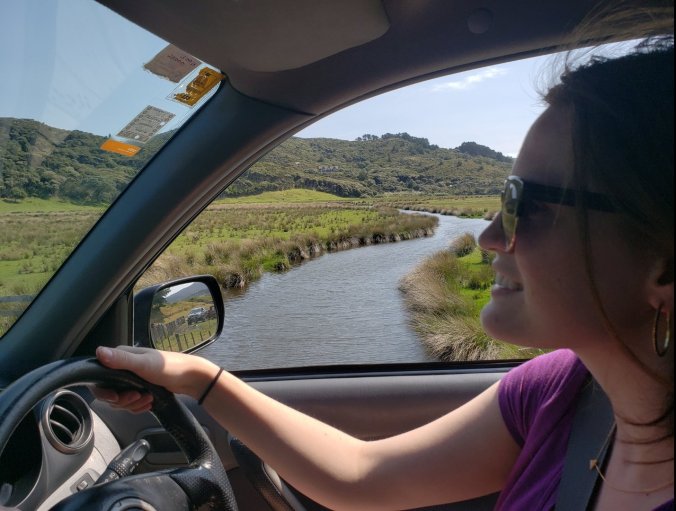 The concept of driving on the left is simple enough in theory, but it’s definitely an adjustment. Not only do you sit on the other side of the car, but your gear shift and review mirror are on the opposite sides, as well as the wipers and turn signals are reversed. I’m constantly turning the wipers on every time I want to make a turn and for the first day I kept forgetting about my review mirror and found myself glancing right into my side mirror out of reflex to check what’s behind me. Our first drive was just me pulling over every 5 minutes to let all the cars that had built up behind me pass. It doesn’t help that the roads on GBI are about the same width as a single lane road, but are meant to accommodate cars in both directions. There are no lines on the road and since it’s a mountainous island, it’s also filled with so many twists and turns. Everyone just drives in the middle of the road until they see an approaching car, but it makes me nervous on all the turns.

Eventually you do adjust and I soon found myself whipping around like the rest of the locals. I do remind myself to “think left” every time I get in the car though and I think it’s going to be a whole new learning experience when we fly to Queenstown and there are actual traffic lights and intersections. It’s pretty much just one road here.

But that’s all I’m going to say about Great Barrier Island for now because we spent 3 days there and I can easily fill another whole post talking about it. Lets just say it’s incredibly beautiful and the people are so friendly and laid back. I’m in love with island life and cant wait to tell you all about our adventures on the island in my next post.