I’d intended for this to be my last blog post on the trip, but it turns out I had a lot to say on the Panama Canal, so I’ve split it into two blog posts, one for each of our last two stops: Boquete and Panama City.

After we left Bocas the weather improved and we didn’t see much rain for the rest of the trip. We took a shuttle bus from Bocas to Boquete, which is located in the mountains about midway between the Pacific and Atlantic Ocean, but still near the Costa Rican border. 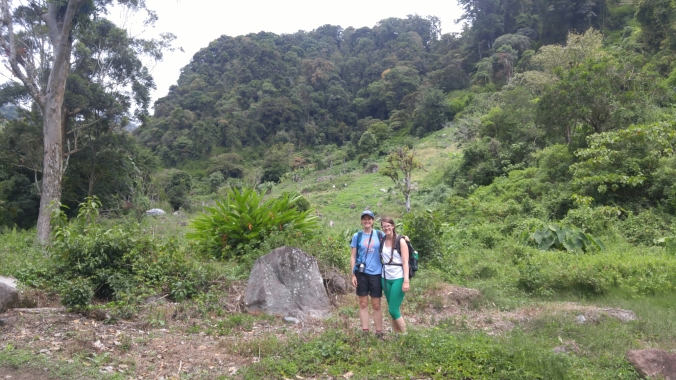 I really liked Boquete and wished we had more time to spend there. The drive through the mountains is incredible; Boquete is located in a valley with the Rio Caldera flowing through the city and is surrounded by rolling green mountains. We didn’t have too much planned for Boquete, but we found a company that set us up on a tour for our first day there.

Boquete is a great area for wildlife lovers and hikers. It’s also known as one of the best locations to see the Resplendent Quetzal – a rare and beautiful bird. We went hiking along the Pipeline Trail on our first morning, which is named for the natural spring water that is piped down along the trail to the city. Our guide was a Panamanian named John who turned out to be one of the best guides to go with if you want to see quetzals. He’s actually writing a book on them and is excellent and seeing and hearing them. He can even do the quetzal call and near the end of the hike, a quetzal actually responded to his imitation of their call!

We started off at a pretty slow pace, observing and identifying the many birds that hang out in the valley. Eventually we picked up the pace to get higher up in the mountains in hopes of spotting the quetzal. In the end it didn’t take too long and John spotted two male quetzals for us! They were quite close and I got some great pictures of them on my camera and on my phone through John’s scope. Even Emily, who maintains she has no interest in birds, was impressed with the quetzal.

In the afternoon we visited the Cangilones de Gualaca, also known as the “mini-canyon”, which is a popular swimming spot among the locals. The canyon was formed where the river cuts through the rock in the dry season. In the wet season the water level can rise so high that the canyon becomes completely covered, so we were there at the perfect time. There’s a little waterfall at the start of the canyon and it’s very deep, so you can jump into the water pretty much anywhere throughout the canyon.

The bigger challenge is getting back out of the canyon. Some of the locals are great rock climbers, but even though we tried several times, Emily and I had no luck climbing out of the canyon. As Emily said, it’s too much work for vacation anyways, so we were forced to swim the entire length of the canyon anytime we wanted to get out. There were a few locals around since it was a Saturday, but we were the only tourists and had a great time relaxing in the canyon. A few of the local kids took an interest in us and Emily’s go-pro, but they were very disappointed it didn’t have a screen and they couldn’t see their photos.

On our second day in Boquete we struck out on our own. We decided to do a short hike to the lost waterfalls, which goes up the river to three separate waterfalls. The trail is not well maintained beyond the first two waterfalls, but we decided to do it anyways and were in quite a state when we finished. It climbs up and down pretty steeply and Emily got totally covered in mud. The waterfalls were very beautiful though and I personally loved the mountain vistas. 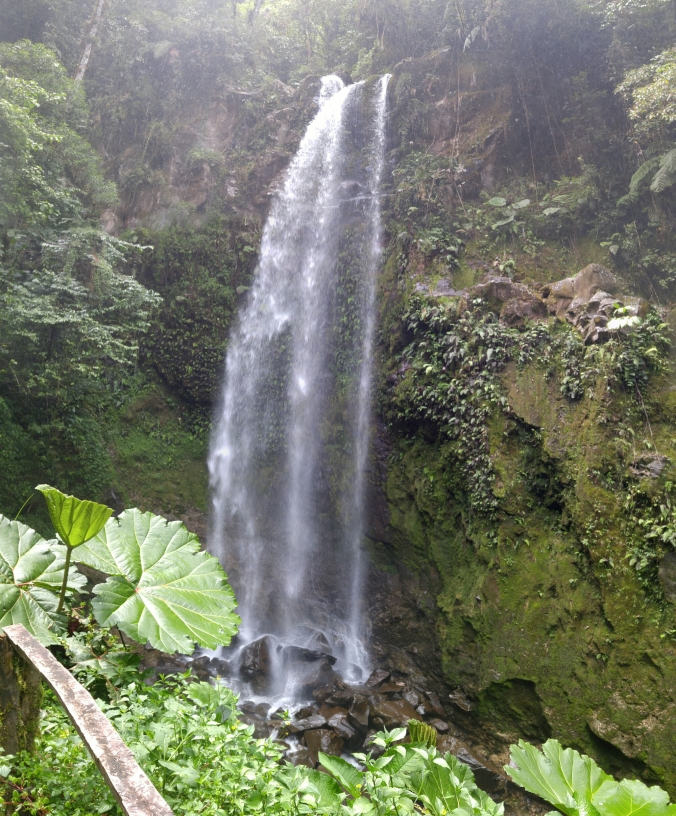 Our visit to Boquete reminded me that as pretty as beaches are, I really love the mountains. I guess that’s the Vancouverite in me coming out. Boquete had the most beautiful rolling green hills and I wish we had a car so that we could explore the area further. We also enjoyed that it was cooler up in the mountains and we even cooled down enough to hop in the Jacuzzi at our hotel in the evening, which is a great way to relax after hiking!

From Boquete we took a bus to David, one of Panama’s larger cities, where we caught our only domestic flight to Panama City. It’s only a short flight, but it was quite the experience! From the airport we could see rain and lightning off in the distance. It reached us just after we boarded the plane and we had a huge lightning show as we sat on the tarmac waiting to take off.

It was one of the scarier flights I’ve taken and the seatbelt sign remained on for the entire flight. We were in the clouds for most of the flight with flash lightning going off around us every 5-10 seconds. There was a lot of turbulence and the cabin was constantly flashing purple from the lightning outside our window. Occasionally we would climb above the clouds and see them illuminated by the lightning – it was an intense flight and we were certainly happy when we arrived!

Stay tuned for my last post on Panama City and one of our favourite attractions, the Panama Canal.

One thought on “Back to the Mountains”