We’re back in busy Rio, but we just had the most amazing 3 days in Iguazu Falls! We flew through São Paulo to get to Foz do Iguacu; we’re not spending any time in São Paulo, but we got a quick glimpse of it from the plane on the way to and from Rio. I thought Rio de Janeiro was a big city, but São Paulo was enormous! There were miles of skyscrapers as far as we could see! Rio has about 10 million people in the city and surrounding area, but São Paulo has 20 million. I’m sure it’s a cool city, but it was kind of a relief not to have to have to navigate such a large city.

We arrived in Foz do Iguacu in the early afternoon and decided to drop by the tri-border. Rio Iguazu, the river Iguazu Falls is located on, marks the border between Brazil and Argentina. A few kilometers from the falls, the river intersects with Rio Parana, which marks the border between Paraguay and Brazil. The tri-border is where the rivers meet and you can see Argentina on one side of the river and Paraguay on the other! There’s a monument on each side painted like the respective country’s flag. We had fun snapping a few pictures of all three countries.

In Foz do Iguacu, we finally got the opportunity to try acai, which we’ve been hearing a lot about from other travelers we’ve met. Acai is a berry that is very popular in Brazil; they serve it frozen and whipped like sorbet. We tried it with cupuaco, a sour tasting fruit, with bananas and granola on top. We ordered a large bowl to share and had a great laugh when we were served a gigantic bowl with acai piled up to about twice the height of the bowl! It was delicious though and we actually finished almost all of it.

A heaping bowl of acai

Since the falls are located on the border between Brazil and Argentina (and since we’ve flown so far to see them), we decided to spend a day on both sides of the falls. In case you’ve never heard of Iguazu Falls, it’s a series of waterfalls that flow from the enormous Iguazu River. There’s more than 200 different waterfalls stretching along the river, approximately 70% in Argentina and 30% in Brazil. We honestly couldn’t pick which side we liked better as both sides were very different.

We spent our first morning on the Brazil side. There’s only 1.5 kilometers of trails on the Brazil side, but since most of the falls are on the opposite side of the river, you get a great panoramic view of them as you walk along the trail. You start at the downstream end of the falls, so as you progress upstream, the waterfalls just keep getting more and more impressive! You finish just downstream of Devil’s Throat, the biggest waterfall, which extends in a huge horseshoe around the river and has the largest flow of water. The viewpoint on the Brazil side has walkways that jut out over the bottom of the river and look up at the huge wall of water that is Devil’s Throat. It is an incredible view and the volume of water pouring over the falls every second is mind-boggling!

Since the waterfalls are located in a preserved area, Iguazu National Park, there were lots of animals and birds to see around as well. It’s easier to see wildlife on the Argentina side, but we still saw lots on the Brazil side. The most common mammal is the quati (or coati). I can only describe it as a South American raccoon. They have really long noses and striped tails and at first you think they’re really cute, but then you quickly realize what a pest and a nuisance they can be. I put my bag down at one viewpoint and when I looked back, the quati’s had swarmed it! Then at lunch, we saw one jump up on the table and grab an entire box of french fries from a surprised couple. There were lots of swallows and vultures flying around the falls, but the most numerous thing we saw was butterflies. There were butterflies of every size, shape, and colour flying all over the park!

Since we only needed a morning to see the Brazil side, we spent the afternoon at a bird park called Parque Das Aves. It was enormous and we saw every type of South American bird imaginable, including toucans, which I’ve always wanted to see up close. They have a few aviaries set up in the park where the birds all fly around together and you can walk through. In one of them there was a little red-breasted toucan just hanging around on one of the rails and he let us pet his head! We were surprised because it wasn’t something set up by the park, it was just a stroke of luck.

We wondered if we might get tired of the falls on the second day, but it was impossible as they are so incredible and both sides of the river offer very different perspectives. To make logistics easier, we went with a tour group to see the Argentina side. We all crossed the border together and spent the day exploring the falls as a group, except when Emily and I did a boat tour. The boat ride was called the Gran Aventura, or the Great Adventure, and was one of the first things we did. It starts with a 20 minute ride through the jungle, before loading into boats that will take you up the river to the falls (they called them boats, but they were really just gigantic rafts with a motor).  I was slightly terrified on the ride up the river as we went over some really large rapids. We had a great view of the falls from the boat though and the captain finished by essentially driving us under a few of the waterfalls. We got absolutely soaked… well Emily did. I had a poncho, so I didn’t get too wet, but with only a rain jacket, Emily got really wet. Still a fun experience though!

Since there are so many more falls on the Argentina side, there are a lot more trails. There was no time to rest if we wanted to fit everything in, so as soon as we got off the Gran Aventura, our group whisked us away on another boat to cross to San Marten Island to do the trail over there. We did a little hike around the island; there’s a lot of viewpoints and they’re all amazing. We were a little preoccupied though because we were both dying to pee after our first boat trip and we had a laugh at each other trying to find somewhere to go in the woods that wasn’t surrounded by tourists! 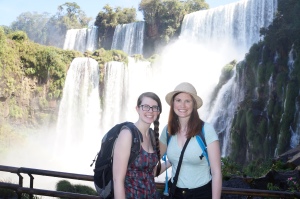 We spent the afternoon doing the rest of the trails, including the upper and lower circuits above and below the falls. As promised, the wildlife was much more impressive on the Argentina side. We saw tons of birds, including a real, live, wild toucan! It was a toco toucan and we had a great view looking down on him perched in one of the trees. We also saw a family of brown capuchin monkeys! They were hanging around in the trees near one of the paths, but we were really sad to see people feeding them bread. There are signs all around the park explaining not to feed the wildlife because our food is not natural to their diets and being fed all the time can cause them to become aggressive or develop diabetes. We experienced this first hand we one of the women in our group got attacked by a quati. It tried to steal her bag and then gave her a huge scratch down the back of her leg. We just hope she goes and gets the appropriate shots! 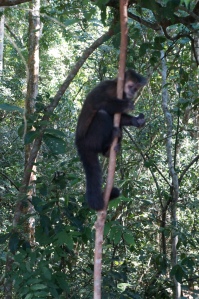 We finished the day with a visit to Garganta do Diablo (Devils Throat). Since it’s located on the Argentina side, this time we approached it from the top. We got a better idea of the huge scope of the river when we had to walk a full kilometer on walkways across the river to get to Devils Throat. It was unbelievable! The river flows over the edge in a huge horseshoe, with water pouring over all sides. The viewpoint is located on one side of the horseshoe, so you can see the water thundering over the edge below your feet and all around you! We got wet again from all the mist, but we stood watching the river pounding over the edge for quite a while before walking the trail back across the river.

Iguazu Falls has been on my bucket list for a while and it absolutely lived up to the hype. I wasn’t sure if it would live up to my expectations after having already seen so many pictures of the falls, but it definitely surpassed them!

We’re almost at the halfway point in our trip already, but we’re looking forward to more time in Rio and hoping that the weather cooperates for our visit to Ilha Grande (sadly it’s not looking that way right now). We’ve had unbelievable weather thus far though, so we shouldn’t complain! Talk to you soon,

One thought on “A Visit to Iguazu Falls”