As I mentioned in my previous entry, I had the opportunity in December to ski the Alps. This has been on my bucket list for a while and I wanted to take the chance to do it before moving back home. My Dad came over for a week before Christmas and we decided to hit up Austria for a little snow adventure!

In the interest of time, we decided to skip Vienna and flew into Salzburg instead. Salzburg is located right on the Austrian-German border and is surrounded by mountains. It was made famous by The Sound of Music, which was set and filmed there. It’s also the birthplace of Mozart and has some of the most delicious chocolates, which are called Mozartkrugel. In the spirit of Christmas, we spent most of our time exploring the Christmas Markets. I liked London’s Christmas Markets, but Austria’s Christmas Markets were just incredible! Everywhere I looked, I was surrounded by tasty treats, homemade ornaments, candles, chocolates, and jewelry. We tried out a few traditional foods and stocked up on chocolates. 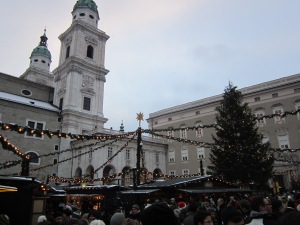 From Salzburg, we took the train to Ischgl, which is the ski resort where we spent the majority of the trip. Ischgl is unlike any ski resort I have ever been to (which really isn’t that many actually). In order to get there, you have to drive right into the Alps for about an hour. The ski town lies in the valley and in order to get to the slopes, you have to take a gondola up into the mountains. From there, there’s 43 lifts and 240km worth of ski trails going up and down the surrounding peaks. We discovered that the peaks of the mountain range actually form the Austrian-Swiss border and that when we were skiing down one side it was the Austrian Alps, while the other side was the Swiss Alps. It was amazing!

The first day we skied, it was pretty overcast and snowed a lot, but the second day was sunny with blue skies and unveiled a completely new world to us. On cloudless days, you can see the peaks of the Alps for miles around! It is an incredible view and completely took our breath away when we reached the top of the lift. I felt that no matter where we skied we were guaranteed to have an amazing view. We skied for three full days; even though my legs were really sore at the end, I loved every minute of it and I’m so glad I had the opportunity. Surprisingly, I also found the skiing really affordable, the daily lift pass is actually cheaper than a lift pass at White Hills back home. 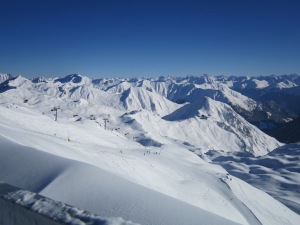 View of the Alps

We finished off the trip by stopping into Innsbruck. I visited Innsbruck briefly when I was in high school, but it’s quite a different scene in the winter. Innsbruck is very scenic with the mountains surrounding it, but I found it really cold and didn’t enjoy it quite as much as Salzburg. It’s definitely a colourful city though and there’s always lots of history to learn about! I think I would love to go back to Austria in the summer sometime to do some hiking and to experience the beautiful mountains and lakes in a different way.

One thought on “Skiing the Alps in Austria”