I can’t believe this past weekend was Remembrance Day! I really don’t know where the time has gone. I have just 4 short weeks of work left and just over a month until I am back home again! The last few weeks have been just as enjoyable as the rest of the trip. I’m starting to miss home a little bit, but I’ve been surrounded by some many Newfies lately, I barely feel like I’ve gone anywhere. 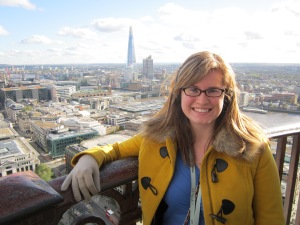 After St. Paul’s, we spent the rest of the weekend eating and shopping! Philippa came out with us to go shopping in Camden Market and we met up with Lisa to shop for dresses for our engineering graduation on Oxford Street! The four of us met on Saturday evening for a very enjoyable night in Brick Lane and Shoreditch. We went searching for the best deal that we could find on Brick Lane and had the most delicious Indian food!

On Tuesday night I went to see Hey Rosetta! and was reminded of just how many Newfoundlanders are actually living in London and the surrounding area! In case you’ve never heard of Hey Rosetta!, they’re a local band from St. John’s that we’re all crazy about and that you should immediately look up! Danielle came in from Oxford to see the show and we met up with Lisa and Philippa and friends at the concert. Alex came along to hear Hey Rosetta! for the first time and was one of the few non-Canadians in the crowd. I’m pretty sure the entire group of people studying at Harlow showed up at the concert and we all managed to run into a least one friend from home that we didn’t know was going to be there! It was pretty easy to forget where I actually was when I was completely surrounded by Newfie and Canadian accents. As usual, Hey Rosetta! played a fantastic show! 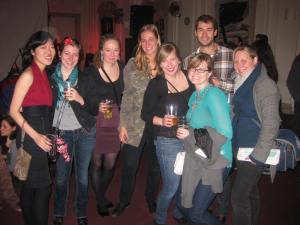 Danielle went back to Oxford after the concert, but she came out again on Saturday to spend the weekend. We went shopping at Portobello Market and did a lot of walking around London! We spent some time in Hyde Park, which looked incredibly nice with the red and yellow leaves still hanging from the trees. It was another shopping filled weekend and after attending the Remembrance Sunday service at my church, we did some serious Christmas shopping on Oxford Street! The Christmas lights have all been put up and it has been feeling very Christmas-y there lately. 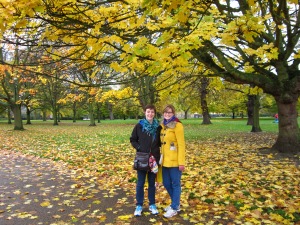 I’m continuing the trend this weekend by heading off to the Netherlands for a few days to visit Helena! She lives in Leiden, which is a half hour train ride outside of Amsterdam, so we’re going to hop around to a few different cities and hopefully avoid all the rain Helena’s been telling me about. After that, I’m only in London for two more weekends before my Dad comes and we head off to Austria for some skiing! Hope everyone back home is doing well; see you all in a month!

2 thoughts on “Reminders of Home”