Part 6 is the final part of my vlog series and covers the rest of our travels on the North Island, including Rotorua, visiting Hobbiton, hiking Cathedral Cove, and exploring around Auckland. This was the trip of a lifetime for us and I hope you enjoyed!

Link here to start from the beginning with Part 1.

The last stop on our 5 week tour of New Zealand was a little trip to the north of Auckland. Sadly we never made it up to the Bay of Islands, which was the one thing I had to drop from the itinerary. It’s hard to believe that even with 5 weeks, it still wasn’t enough time. I would have loved to have 1 more week, but had I gone for 6 weeks I probably still would have said the same thing.

Instead of going the whole way north, we just did a few of the attractions near Auckland. We’d planned to go on a glass bottom boat ride at Goat Island Marine Reserve, but the weather decided to ruin one more thing for us and it was cancelled just as we were pulling out of our hotel in Auckland. It wasn’t raining, so we think it was due to wind? We’re not really sure. But we made the best of it and decided to drive out to Muriwai Gannet Colony instead. 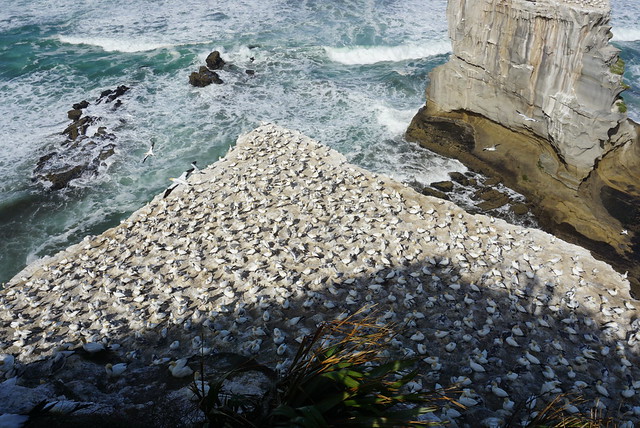 Seth did his bachelors honours thesis on the gannets in Newfoundland, so this stop was mostly for him, but I ended up really enjoying it as well. The gannets have settled their colony right on the cliffside, which is a bit weird for seabirds as they usually stick to islands to avoid predators. It definitely smells like a bird colony, but it was surprisingly fun to watch all the birds interacting together and we ended up spending the better part of an hour just watching them flying around and fight among themselves.

Then we continued north to Tawharanui Provincial Park for our last hike of the trip. Turns out it’s pretty popular among the locals and there were a ton of families boogie boarding in the waves at the beach. We ate our lunch watching the water, but then headed a little more inland to go tramping through the fields. Tawharanui is interesting as far as parks go because it’s the first park where the government tried to have a blend of eco-sanctuary, farming, and recreation. So the park is gated with a predator fence going around the whole thing and is a popular place to release birds that they’re trying to re-introduce. But there’s also a ton of farmland and people can enter the park for recreational activities like going to the beach and hiking. 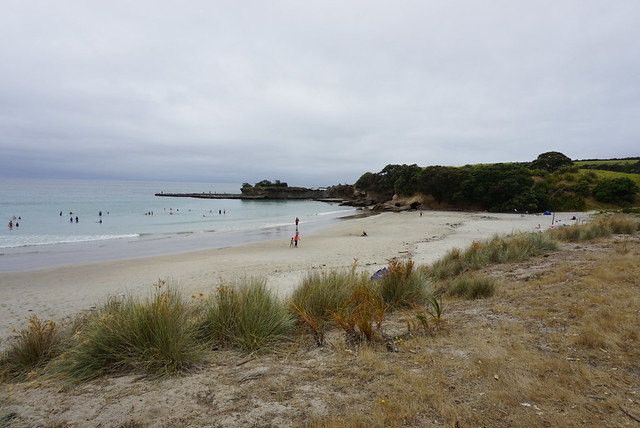 We drove past so many fields and rolling hills as we made our way around New Zealand and I always felt like the hills were calling to me. They just looked really fun to hike up with all the wide open grassy space – but I never got the chance because they’re almost all farmland and fenced off along the road. Since Tawharanui is a mix, I finally got my farmland hike! The hike starts off through field after field. It’s supposed to be a great place for birding, but we didn’t see a lot of birds out in the open space, so we just enjoyed the views. On the way back we took a different track through the woods in hopes of seeing more birds and it definitely paid off. Supposedly there are takahe wandering free in the park, sadly we didn’t see any of those, but we did see several North Island Saddleback! We’d seen the South Island Saddleback on Stewart Island and Seth really wanted to see one on the North Island, but they’re not very widespread. When we didn’t see one at Zealandia, he assumed he wouldn’t get to see one at all, but lucky for us, they had been released at Tawharanui as well and we were lucky enough to spot them. 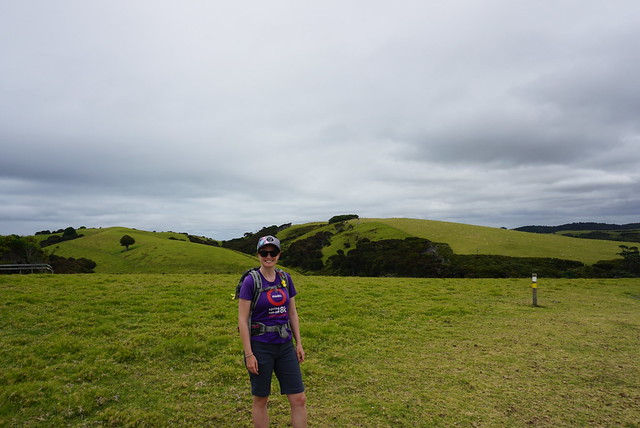 It started to drizzle towards the end of the hike and we returned to the beach to find it completely empty. There was something really gorgeous about the lighting and the way the beach looked. The tide was out, but the sand was still wet from the rain, which gave beautiful reflections of the landscape. We took the opportunity to take some personal time at the beach to reflect about the trip and though I was looking forward to going home, it made me sad to leave. There’s a lot to love about New Zealand and I really felt that it was a place that fit our own personal values. Seth loved all the biodiversity and there’s a real appreciation of nature and wildlife. I just couldn’t get over all the gorgeous landscapes. I’m a sucker for beaches and mountains and I felt the country also had a real appreciation for it’s natural landscapes.

We spent one last night at a little cabin in Leigh. I’d really wanted to camp at Tawharanui for the last night, but it was full up. In the end it was for the best though because it really poured overnight and I can’t think of anything worse then trying to pack up wet gear and then having to fly back to Canada with it. 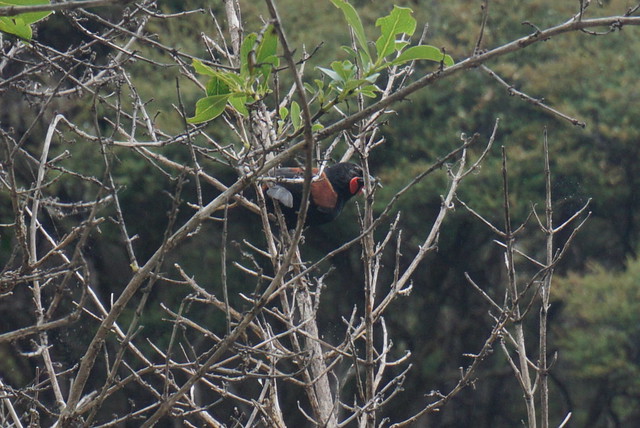 Our flight didn’t leave until 2pm, so we re-arranged and re-packed all our gear, leaving what remained of our food in the donations box in the hostel kitchen. We stopped at a car wash to give our rental a good cleaning and then dropped it off and made our way to the airport. Unfortunately the flight was delayed, but it was direct flight, so at least we didn’t have to worry about missing any connections. It was one of the weirder flights I’ve been on – it left at 3pm in the afternoon and we arrived in Vancouver at 7am in the morning… the same day! Gotta love crossing the dateline!

It was a Wednesday and I had to go back to work the next day, so we were glad to have the whole day to relax, but it ended up not being that relaxing because we arrived back to Vancouver right in time for a snowstorm! It’s no more than a 45 minute drive to our house from the airport, but it ended up taking us almost 3 hours to get home… in a cab! Vancouver doesn’t deal well with the snow and everything was stalled on the highways, but eventually we made it.

I tracked all our stats while we were on the road and at the end of the day, we drove 4600km, hiked 150km, kayaked 26km, and biked 25km! I’m probably a little biased because I spent so much time there and it was my honeymoon, but I would definitely say New Zealand was one of the best trips I’ve ever taken! Hope to go back again some day!

Favourite hike of the year to date - we'll see what July brings!
Out for a jaunt with @instagrant.ob
Exhausted my in-laws on this one, whoops! 😬 They're troopers though and what a day for it!
Am seriously obsessed with this hike! The entire 13km of trail are exposed and incredibly scenic - definitely one of my favourite sections. Now that I've finished it, I've now hiked everything from Cape St. Francis to La Manche!