Steamboat Rock is a little bit further than I normally venture on the weekend, but we decided to visit on a random weekend in May last year and ended up having a great trip! Spring is always rough because the weather gets super nice in Vancouver, but it still takes several months for the snow to melt in the mountains. I was itching to take my hiking boots out, so we decided to head in search of less snowy trails.

It’s about a 6 hour drive to Steamboat Rock, which is a state park in Washington on the other side of the cascades. It’s a long distance for a single weekend, so we decided to get a head start and drove halfway there on Friday night, crossing the border in Abbotsford and camping in the cascades south of Manning Park and Ross Lake. It was after 10pm by the time we pulled into the campsite, so we didn’t do much Friday night except set up camp and get some sleep. We were still in the mountains, so it was pretty cold overnight and I was glad I had packed my winter bag. Emily was sweating in her homemade down sleeping bag, but the rest of our poor friends, Lien, Kevin, and Yuka, were all pretty cold as it was a first time experience for them camping in the mountains in May. 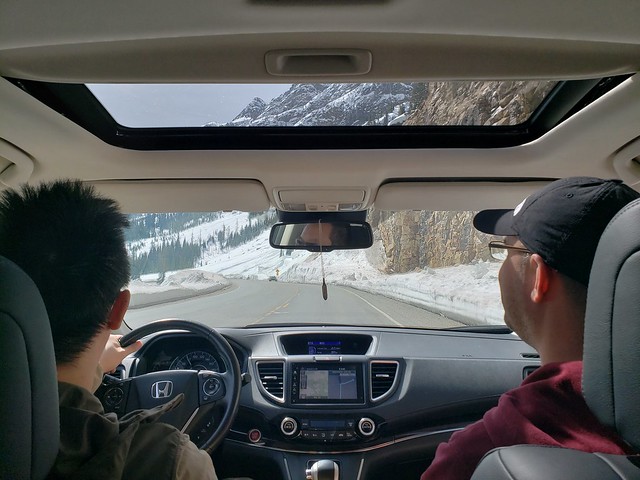 We got up early on Saturday and had the most beautiful drive through the rest of the cascades. The most interesting part about driving to Steamboat Rock is that you pass through almost every landscape you can think of on the way there. We were below the snow line at the campsite and the rivers were flowing fast from snow melt. But as we continued, we drove back up past the snow line and were surrounded by gorgeous snowy mountain vistas. It was a little jarring to see that there were still a ton of snowshoers and skiers out in May when we were all anxiously awaiting the next season.

We left the cascades and entered the flatlands that slowly turned into desert. It’s a really different kind of landscape, but beautiful in it’s own way. We passed several dams and reservoirs before eventually coming to Steamboat Rock State Park. The old river has carved out canyon like features at Steamboat Rock and the river bed has since been impounded for use as a reservoir, so it makes for a dramatic view looking at the rock canyon and the still water below. 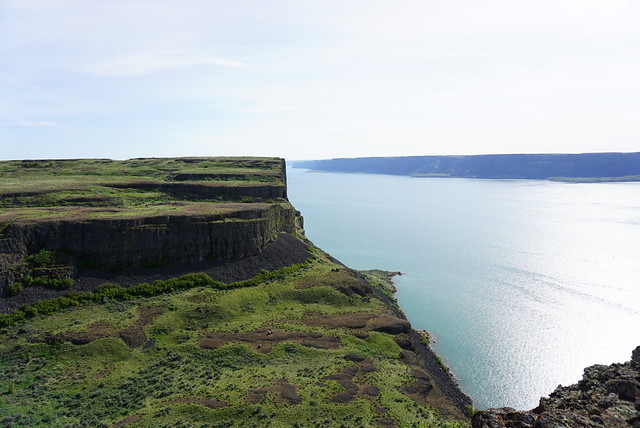 We got a campsite right next to the hiking trail. All the campsites were car camping and it was primarily RV’s at the park. Not really my preferred kind of camping, but it was easy and we had a gorgeous view of Steamboat from our campsite. It differed from a lot of campsites I’ve stayed in in that there were pretty much no trees around, just grassy fields running into the lake, Not ideal for privacy, but great for stargazing, which was one of our other motivations for visiting the park.

I really liked the hike, although I wasn’t super impressed with the maintenance of the trail going up the canyon. The campsite is located next to the lake, so you start the trail by hiking about 200 metres up to the top of the canyon. From there it’s a pretty flat hike around the edge of the canyon, with some great views of the lake and surrounding area. But the hike up to the canyon is pretty sketchy. I’ve done my fair share of sketchy hikes, but this one is located right next to a 300 site campground filled with RV’s, so it’s a pretty high trafficked walk and I saw a lot of inappropriate footwear and preparedness that I thought warranted the park investing some more work in the trail. You’re mostly hiking up scree and some sections where the rock has all worn away on the sides and it’s a steep, slippery trek. It’s not too bad on the way up, but really dangerous coming down as it’s super easy to dislodge rock that could hit those below you. I personally fell twice and scrapped up my hands a lot. 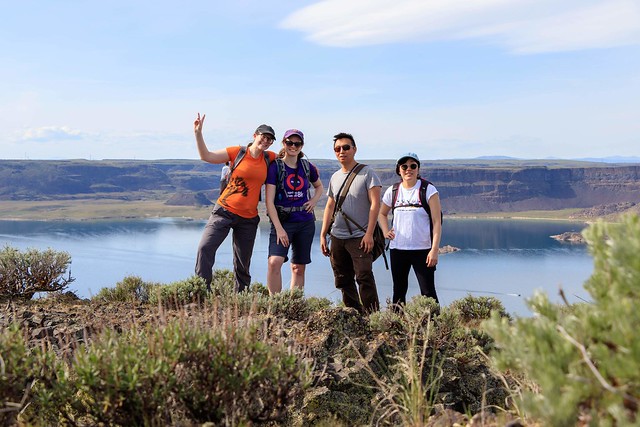 But once you get to the top, it’s pretty easy going! We hiked the entire trail around the rim of the canyon and I really liked it. The topography is so different from what we’re used to seeing and it was fun to explore something new. What was surprising though, was that we saw a lot of people on the hike up, but once we started hiking the rim, we didn’t see a single other person! So I think a lot of people just hike to the top for the view and then go back down (more reason to invest in the trail).

I have barely spent any time in the desert, but between this trip and my trip to Vegas (which was only a few weeks before), I went on two desert hikes in the same month! We joked on our hike to Valley of Fire State Park in Neveda that we would freak out if we saw any rattlesnakes or scorpions. Well we had that opportunity at Steamboat Rock State Park! We actually ended up seeing an impressive amount of wildlife on the trip. We saw one deer on the road driving through the cascades, as well as 3 more deer hanging out on top of Steamboat Rock. We also saw a ton of marmots of all sizes on Steamboat Rock and the whole park was filled with all different kinds of birds, from small songbirds and blackbirds, to eagles and dozens of vultures. 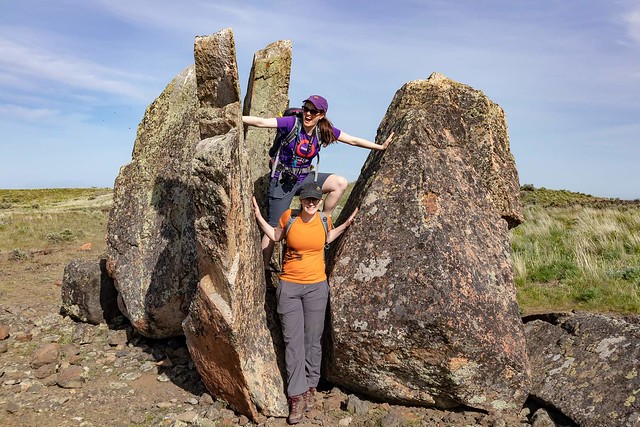 But the most jarring was definitely seeing a rattlesnake for the first time. Or more accurately, hearing a rattlesnake for the first time. Me, Emily, and Lien were hiking ahead when we heard a rattle and frantically started looking around, immediately spotting a rattlesnake staring at us to our right. We backed away, but evidently he was just as afraid of us and turned on his heel and slithered away into the bushes, shaking his tail at us. About 10 minutes later, Lien came across another snake, this time directly on the trail. This one didn’t have a rattle in it’s tail, but after a bit of research, we think it was a baby rattlesnake, because it definitely wasn’t a garter snake. Kevin (who missed out on both snake sightings) thought it would be funny to secretly shake a bottle of pills later on the trail and watch the three of us freak out, but he got a stern talking to about how traumatic it was for the rest of us. 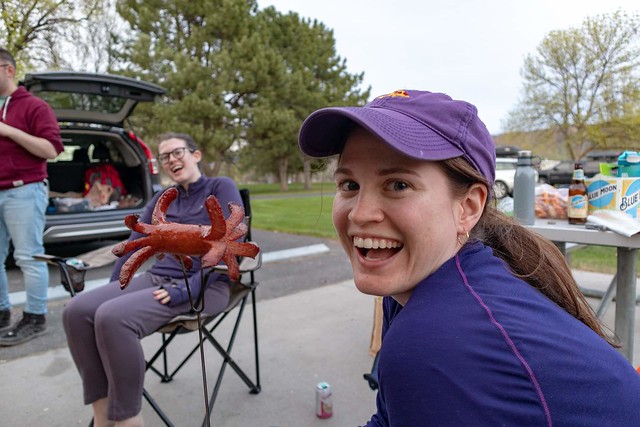 Snake trauma aside, it was a super fun trip. It was really hot out and even though it was only May 4th when we went, me, Emily, and Lien decided to take a quick dip in the lake when we finished the hike. It was the earliest I’ve ever been swimming and while it was cold, it really wasn’t that bad and had nothing on some of the glacial lakes I’ve swam in. It felt great to wash all the dirt off and the cold water feels so good on aching muscles.

One of the pros of spring camping is that the fire ban hasn’t yet kicked it! So we spent the rest of the evening roasting hot dogs and enjoying a campfire. Yuka impressed us all with her wood chopping skills and Lien was ecstatic about finally getting to try out his tent for the first time. Once the stars came out we all spent about an hour making some attempts at night photography. They weren’t some of my best photos, but I had fun messing around with the camera and actually having a tripod for once (thanks Kevin!). The only downside to the campsite was the sandflies. It wasn’t bad during the day, but once the sun went down they came out in swarms. Fortunately they don’t bite, but it was really annoying and a ton snuck into our tent somehow. 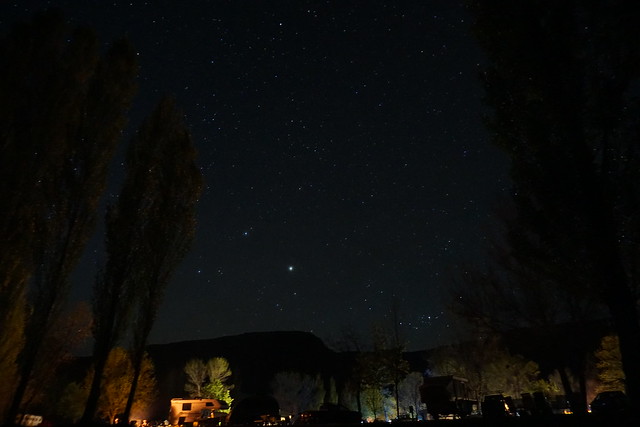 We rolled out around 10am the next morning and had a long drive back to Vancouver. It wasn’t too bad on the way there because we broke up the drive between two days, but it definitely made for a long drive back. We stopped in this cute little town called Leavenworth on the way back for lunch. It’s in the middle of the cascades and the whole town is German. It’s a total tourist trap with all kinds of German restaurants and attractions. We had schnitzel burgers and ice cream before hitting the road again. We hit some pretty bad traffic after that, but we found an old CD case in the car with all of Lien and Kevin’s angsty teenage music from the early 2000’s and had a great laugh seeing what kind of music they used to like. Apparently Kevin had a penchant for angry German screamo and techno tv show theme songs, while Lien had a secret love for country music and Avril Lavigne.

So overall I had a lot of fun on this trip. I do think it would probably work better with an extra day to explore through the cascades a little more, but it was really fun to get out of Vancouver and explore something totally new! 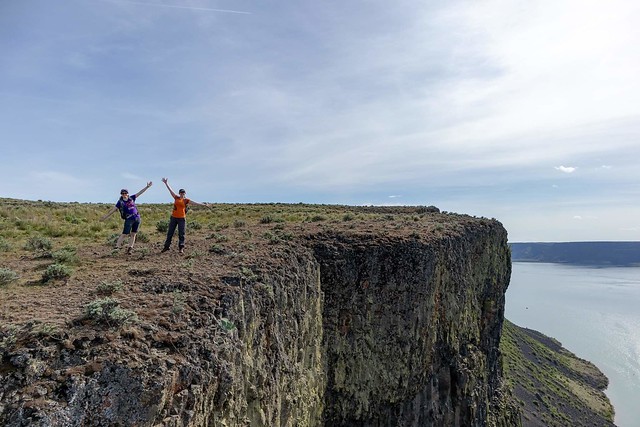 Day 2 - the official start of the trail. It follows the coast for the first 3km, before moving inland for almost the entire rest of the trail. However the first 3km travel through Desolation Sound Marine Park and I got the chance to scope out some of the kayaking sites, both the real Sarah Point site and Feather Cove. My favourite part was all the Arbutus trees!
Day 1 on the Sunshine Coast Trail! We took an uber, 2 ferries, 3 buses, and a 4x4 to get to the trailhead at Sarah Point and hiked exactly 0km. Wouldn't do it any differently! There's a hut right at the trailhead and these gorgeous tent pads overlooking the water, so we settled in to rest before hitting the trail the following morning.
Can you spot the girl guides?
It was hot last week and it's going to be hot this week, so me and Sadie have been using a modo to cool down at all the local lakes. Our favourites are Buntzen and Golden Ears since they're both dog friendly (but dont forget your day pass)! Dogs can be taken in modos so long as they are in a carrier. Use my promo code MARIA50 for $50 of driving time when you join!