I went on two snow camping trips this year. My first trip was to Elfin Lakes in February in temperatures of -20 below, the second trip was to Keyhole hot springs, in much more manageable temperatures! I’ve been trying to visit Keyhole hot springs since 2016 and had two failed trips before finally making it there this year. In summer 2016, me, Brandon, and Carolyn planned to visit over the Canada Day long weekend, but were dismayed to hear that the trail was being closed due to an aggressive grizzly bear (more on this later). Then me and Brandon tried to visit again in winter of 2017, but only made it halfway there because a semi-truck had jack-knifed across the forestry road and was blocking traffic in both directions.

So this was our third attempt, and I’m pleased to say we were finally successful! We wanted to go on a second snow camping trip before the end of the season and Carolyn’s been working on visiting all the hot springs in the area, so we decided to visit and stay overnight to try and avoid some of the crowds. Like I said, our first trip was to Elfin Lakes and the temperature dropped to -20 degrees celsius overnight, so we were thrilled to see that the forecast for Keyhole was calling for 7 degrees during the day and -6 degrees overnight. I ditched my double sleeping bag system for this trip and packed in my bag liner and new backcountry blanket instead. 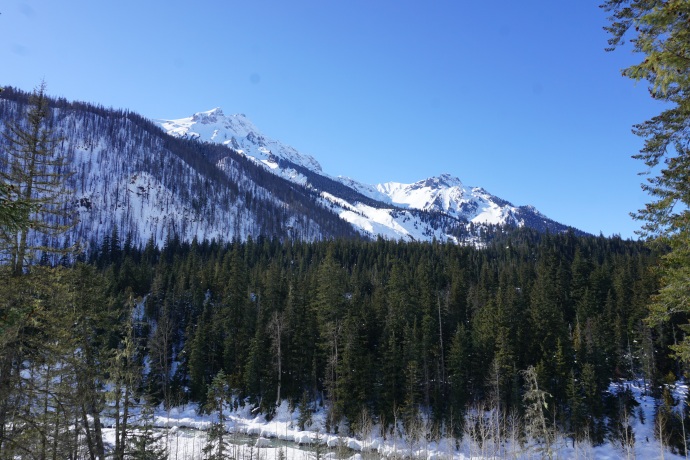 Keyhole hot springs has become insanely popular in the last ~5 years. It used to only be accessible with 4WD, but the road was upgraded in 2014 because of a new hydro construction project in the area and the hot spring blew up on social media, making it a really popular destination for backcountry lovers and drunk partiers alike. I have really mixed feelings about the hot spring because I do believe everyone should have the right to appreciate natural wonders like this, but it’s also been severely disrespected by some of its visitors and it’s very upsetting to many of the locals.

It’s only a 2km hike to the hot spring and due to the excessive number of visitors, and the fact that it’s not a park (so it’s not managed by any rangers), a lot of garbage started collecting around the area, which of course, started attracting bears to the area. Keyhole is located on a forestry road out past Pemberton, so there are grizzly bears in the area and they started becoming aggressive towards visitors, so the province closed the trail in 2016 between April and November to stop the bears from becoming habituated to food and people. Since then, the trail is only open in the winter, hence why we decided to visit in March. 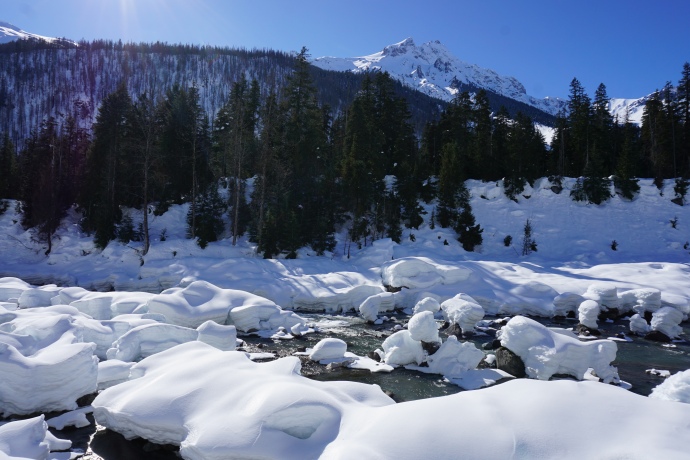 We drove out on Saturday morning, with the intention of staying for one night. We knew it would be really busy on a Saturday, so we were happy to stay overnight in hopes of avoiding some of the crowds later in the evening. We were right about how busy it would be during the day, but we wrongly assumed we’d be the only one’s camping. Since the road has been upgraded and is kept plowed for the construction project, 4WD is no longer required to get to the trailhead, although winter tires are definitely a must. We arrived around 1pm and I counted over 20 vehicles in the parking lot at that time.

We chatted with some of the day hikers on their way out and a lot of them expressed an admiration for the beauty of the trail, but told us they didn’t end up going in the hot spring at all because there were just too many people around. I would echo the sentiment about the trail. Granted, we had gorgeous blue sky and sunny weather when we visited, but the trail itself is worth visiting and ended up being the highlight of the trip for me. In winter, the trail ends up being about 3km because you can’t make it all the way to the trailhead and you do have to walk an extra km along the road, but the rest of the trail follows the river, which looks gorgeous in the winter with huge pillows of snow on every rock. 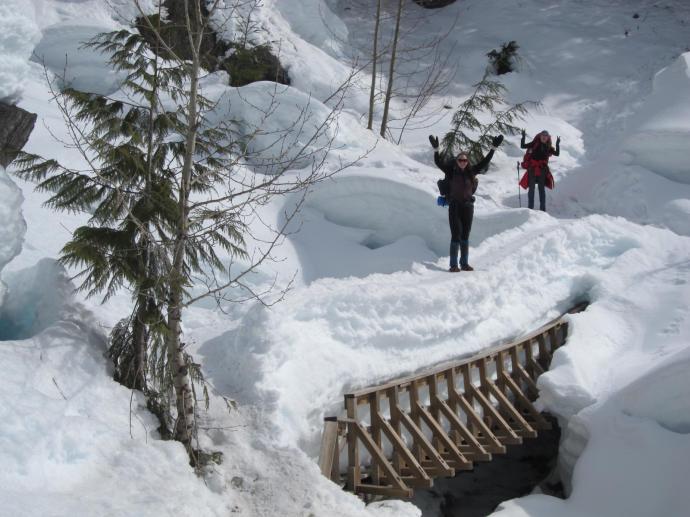 It’s easy to find the parking lot, you just follow the Lillooet Forest Service Road for about 40km until you reach a parking lot. The road becomes a “private road” at the end of the parking lot, so you’ll know you’ve found the right place. There is a branch in the road at the parking lot and a separate road continues up the hill. The road is plowed, so it’s possible you could drive up it, but the snow was very soft by this time of year, so everyone was parking at the bottom and walking up the road. The only tricky part is it’s not clear when you have to exit the road into the woods. You walk for a couple hundred metres and you’ll eventually see another side road, if you follow it into the trees, you’ll find the path heading directly down to the river.

The trail was easy to follow when we visited because there were so many people ahead of us and it hadn’t snowed in a while. But if you were the first one to visit after a fresh snowfall, it might be a challenge because the trail is not marked. Be careful visiting in March because the sun was softening up the snow and it would be easy to punch through the trail in some locations. Given the hot weather we’re getting this week, the trail will start deteriorating pretty fast as the snow melts, and remember, it closes for the season on April 1. But we really enjoyed the hike along the river and there were some really gorgeous views of the surrounding mountains. 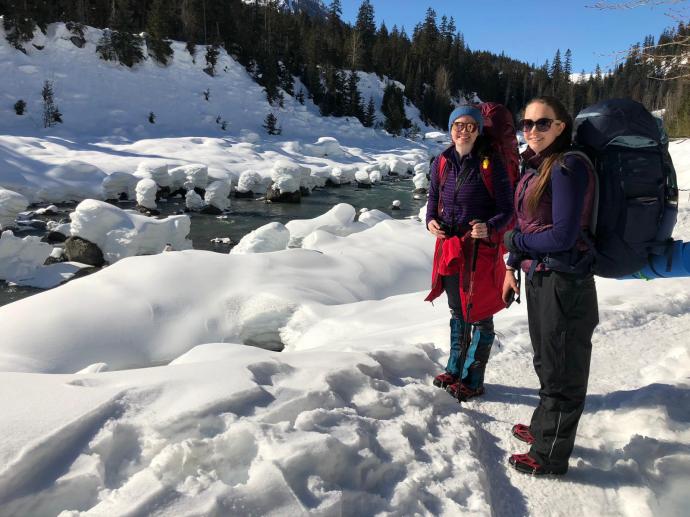 We were wrong about being the only snow campers. There were at least 4 other groups camping that we saw and I think another large group arrived after us. I’m not sure if they were really prepared for the sub-zero temperatures though because they were all packed up and gone by the time we finally crawled out of our tent in the morning. We found a nice little private place to camp and it didn’t feel that crowded at the campsite. Overall though, the hot spring was a bit of a letdown for us. I think it would be a lot nicer on a weekday with smaller crowds and I personally wouldn’t return on a weekend again. There were just too many people and there was one group that hogged the pools for at least 3 hours and were still there after we’d come and gone.

The set-up of the pools is really something. The hot water flows down from a stream above the Lillooet River and trickles into a man made, but natural-looking rock pool. From there the water cascades into two other pools. Unfortunately the first pool is too hot to get in and the second pool is bearable, but still quite hot. The third pool is a perfect temperature and as such, the most popular of the 3. This is where the one group were hanging out. We went down to the pools around 4pm, but it was still busy, so we came back again a little later. We were able to get into the second pool and hung out in there for a little while as the sun set. But the one group insisted on blocking up the bottom pool and stayed into the night drinking, so we did get to visit, but overall it was a little frustrating. We debated getting up early to visit again, but decided to let it be in favour of a lie in, which I definitely don’t regret! 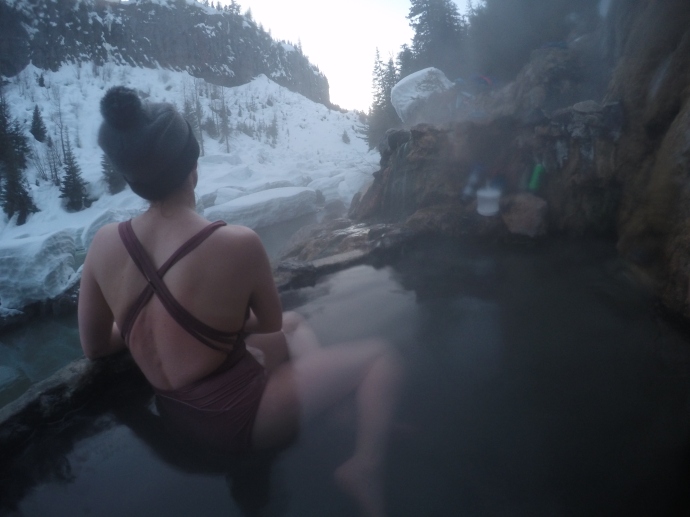 So overall, it was nice, but I would personally recommend going on a weekday if at all possible. Also, don’t be the group that gets drunk in the bottom pool all night. I was impressed that I actually didn’t see any garbage around the hot springs, so hopefully people are learning. But if you decide to visit Keyhole, as either a day hiker or an overnighter, make sure you practice leave no trace camping! Don’t leave anything behind – take everything out with you, including your toilet paper! There’s no facilities at all, so make sure you dig a hole if you’re going #2. The hot springs really are a natural wonder and they are beautiful, so lets do our best to take care of them!

So that’s my rant on the hot springs. I didn’t want to glamourize it because social media does enough of that already. I do think everyone has a right to the hot springs, we just need to protect them. I know keyhole isn’t the only place suffering from overuse, Garibaldi Lake, Joffre Lakes, and other popular destinations also suffer from a huge amount of overuse, with people leaving a ton of garbage behind and destroying the natural landscape in search of firewood. The overuse just seems a little more pronounced at Keyhole because of its small size. 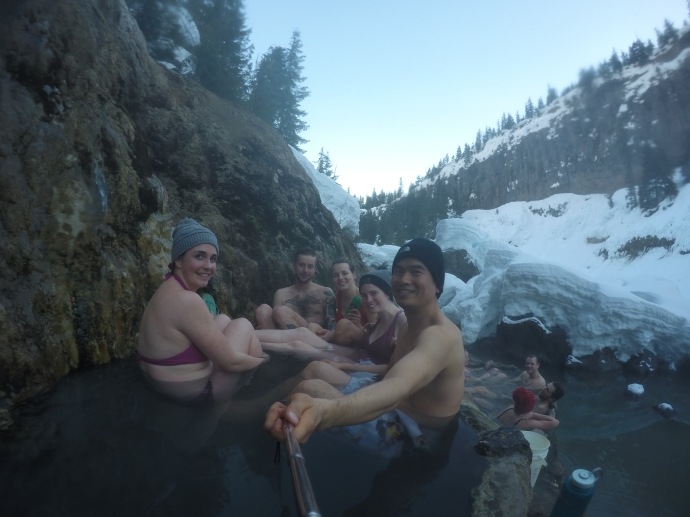 But we still had a great time camping! It was crazy warm during the day when we were hiking in because the sun was shining on us the whole time, but it still got quite cold overnight. On a warmer day, like the day we visited, I think it would be easy to underestimate how cold it can get overnight. I debated how much gear I should actually bring. In addition to my winter jacket and snow pants, I brought my -15 sleeping bag, my sleeping bag liner, a camp blanket, a winter pad, and a lightweight down jacket to sleep in. I thought the blanket and extra jacket might be overkill, but I ended up using both, so I don’t regret it. I probably would have been fine with less gear, but I was so cozy overnight, it was worth it!

We had some more lessons learned when it comes to water though. The last two places we’ve stayed have both had pretty clean snow to melt for water, but because it was later in the season, there wasn’t as much fresh snow and most of it had pine needles in it because the campsite was located in the woods and the needles fall from the canopy. I had to walk a distance to find good snow to melt for water and even then, it still had some dirt in it. We’ve discovered that melted snow tastes extremely gross, so if you’re only going for one night, it might be worth taking a bit of extra water with you for drinking to see you through the trip. But if that’s not possible, which often its not because you don’t want to carry the extra weight and even if you did, the water could easily freeze overnight anyways, so we decided next time we will probably take Brandon’s gravity filter with us. That way we can melt the snow and then put it through the filter to remove any dirt and hopefully improve the taste a little. 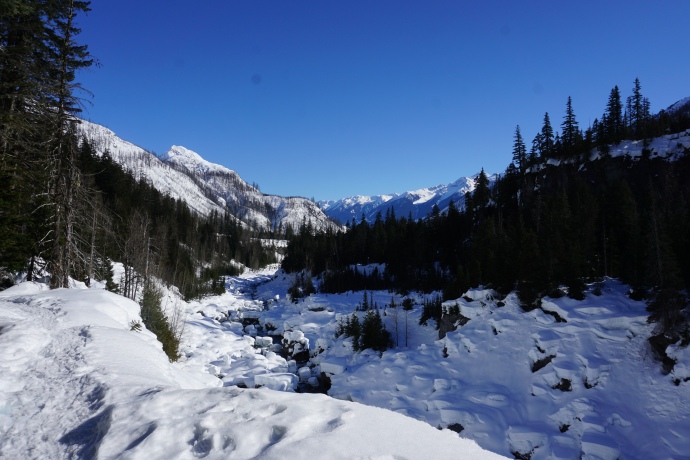 Overall, it was still a fun trip, but it is a long drive (~4 hours) and because of the crowds it doesn’t stick out in my mind as much as the other snow camping trips we’ve done. But we tried something new and now we can finally cross it off the bucket list after all our other failed attempts! 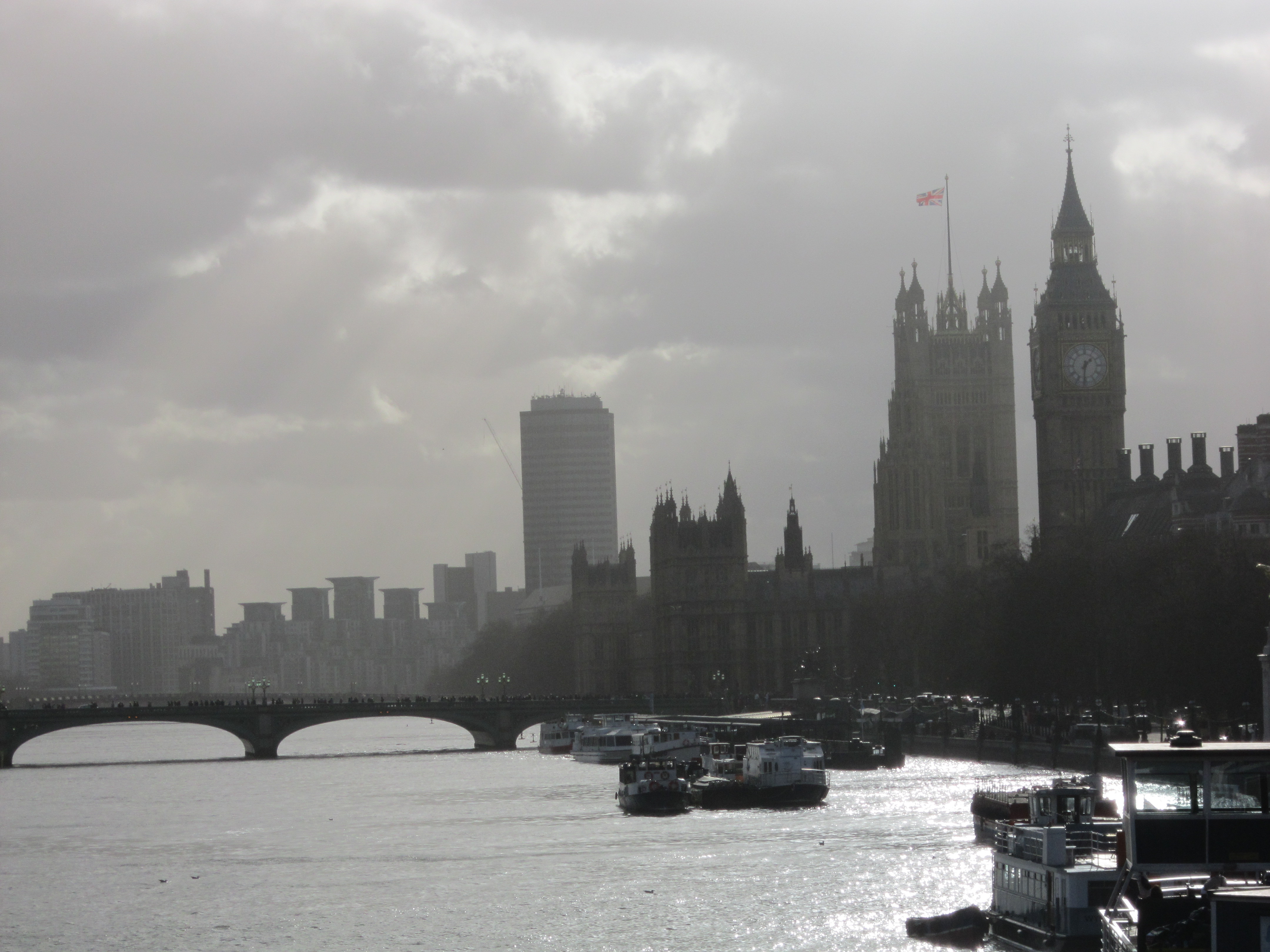