Continuing on with my mini-series on Manning Park, in 2018, 2 years after first being inspired by 3 Brothers Mountain, I returned to hike the full Heather Trail. Manning Park is filled with dozens of awesome mountain trails, but (dare I say) the Heather Trail is one of the most popular. It’s a 21km trail the starts at the top of Blackwell Road, runs past 1st, 2nd, 3rd, and 4th Brother Mountains, and continues through many kilometers of scenic alpine meadows to Kicking Horse Camp and Nicomen Lake. In the height of the summer, you can find every colour imaginable of alpine wildflower scattered along this trail. 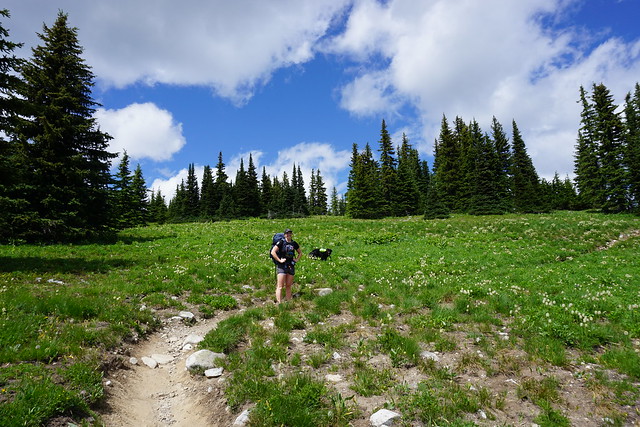 In 2018, I finally took 3 days to hike the Heather Trail with my good hiking buddy, Carolyn. One of the reasons the hike is so popular (I imagine) is because it starts at the top of Blackwell Road, which is one of the few public roads going right up into the alpine, so it saves you from having to hike much elevation gain. I believe most people hike the 21km in to Nicomen Lake and then hike all the way back, but me and Carolyn decided to drive 2 cars out and added an extra 17.5km onto our hike to make it a through hike down to the highway and Cayuse Flats parking lot.

We took Friday off and dropped my car at Cayuse Flats and then started our hike from the Blackwall parking lot shortly after noon. I was dogsitting my friends black retriever, Alfie, at the time, so we had the added excitement of taking a dog with us along the trail. The view from the parking lot is already beautiful and showcases the surrounding mountains, so from the parking lot, we started hiking down into the woods for about 4 kilometres before arriving at the first backcountry campsite, Buckhorn Camp. We skipped this one and continued on towards our destination, which was Kicking Horse Campsite, located at kilometre 12. 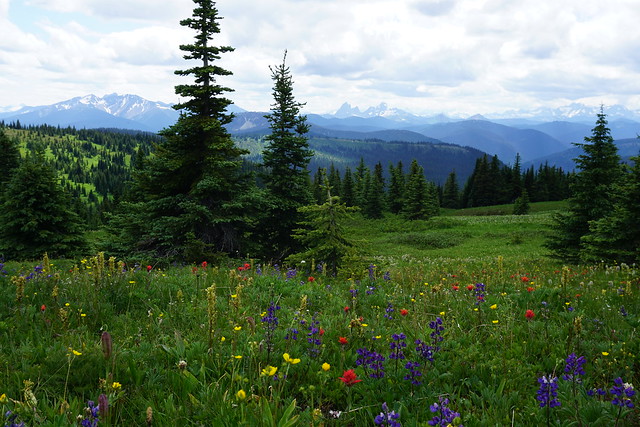 From Buckhorn Camp, the trail gets super scenic. You hike back up into the alpine meadows and from there, you continue along the ridge to First Brother Mountain. There are incredible views of all the surrounding mountains, and though the wildflowers were a little late this year, we did spot a few starting to bloom. The nice thing about the trail is that once you hike back up from the first campsite, there’s very little elevation gain or loss for the rest of the trail (with the exception of First Brother Mountain).

Me and Carolyn aren’t ones for too many breaks, so we pretty much powered through the first 9km to the base of the First Brother Peak. From there we abandoned our packs for a little side hike up the First Brother. Like I said, I’ve done this one before, but it was no less breathtaking the second time. It starts with a steep ascent up the side of the mountain before flattening off again along the ridge to the peak. The mountain drops out from under you on both sides, so it makes for a narrow, but scenic walk up to the peak. 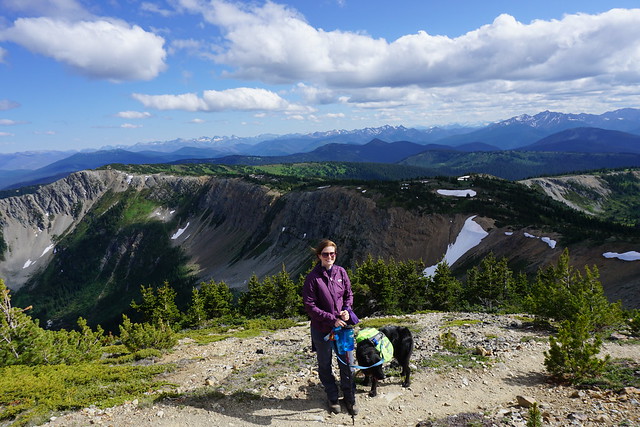 It’s a little steep, so we tried to tie Alfie to a tree for the last couple hundred metres, but he’s part retriever, part border collie, so his herding instinct started to go bananas as soon as we started to walk away from him. We were honestly worried he was going to pull off his leash in his anxiety to stay close to us. I told Carolyn to go ahead without me, but even that was too stressful for Alfie, so he did accompany us (slowly) to the top of the mountain. Honestly, he was totally fine with the rocks, it was me that was the nervous one.

We all survived the hike to the top, so after that we continued our hike to Kicking Horse Campsite. This was all new terrain for me and it was rolling meadows as far as we could see. We weren’t particularly worried about the campsite being busy because we had taken Friday off work, but a group of about 8 boys caught up to us mid-hike, so we kept just ahead of them for the last few kilometres to beat them to the campsite. 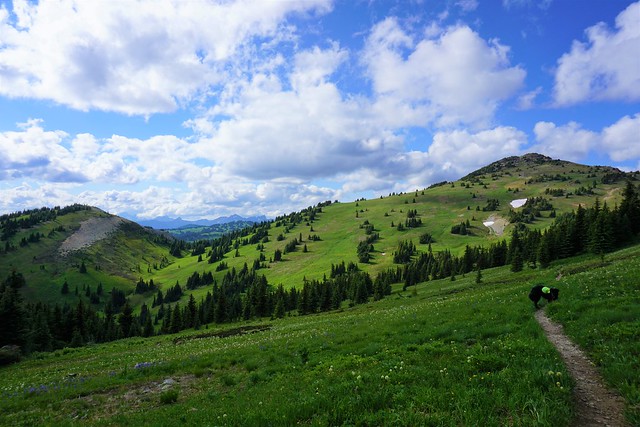 Our haste was wasted though, because even though we had barely seen anyone on the trail, everyone had apparently beaten us to the campsite and all the tent pads were taken when we arrived. So I can only imagine what this campsite must be like on a weekend, especially when the wildflowers are in bloom. But no fear, we don’t like tent pads anyways (they’re hard and uncomfortable), so we found a nice empty patch away from the crowds to set up our tent.

It was probably around 6 or 6:30pm by the time we rolled into camp, so we mostly just set up camp and had our supper before hitting the sack. We weren’t sure how many people were heading to Nicomen Lake in the morning, so we wanted to get a head start nice and early. It was also pretty cold, so we layered up and cocooned into our sleeping bags for the night. It actually dropped below zero in the night because when I got up to pee Alfie’s water bowl had completely frozen solid and everything had frost on it when we got up in the morning. 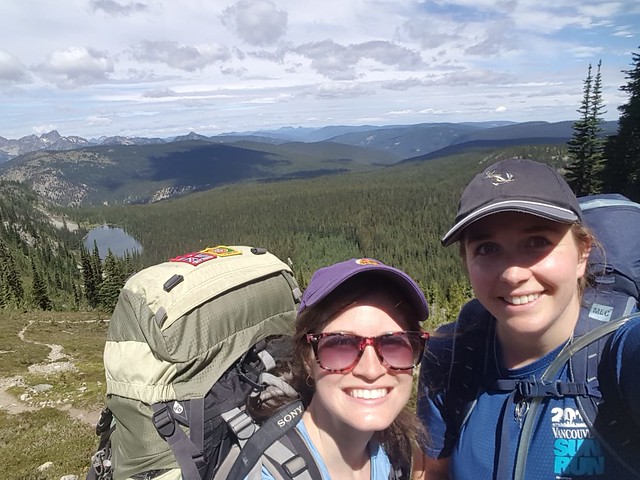 We’d picked a stellar spot though because as soon as the sun made it up over the mountains, it was shining directly on our tent. There’s nothing I love more than being able to pack up a dry tent! We had a quick breakfast, took down camp, and then started on our way to tackle the 9km to Nicomen Lake.

The hike to Nicomen Lake is just as scenic as the rest of the trail. We hiked through meadow after meadow until we finally hit the ridge before Nicomen Lake. From the top of the ridge, we could see Nicomen Lake and started our descent towards it. We were momentarily distracted by a helicopter transporting a supply load via cable down to the campsite and a couple we passed in the opposite direction informed us they were doing some campsite maintenance at the trail.

We had no worries about campsites this time. We were the first people to make it to the lake and arrived around 12:30pm. This time, the tent pads were all taken up by the maintenance crew, but we found an awesome sandy spot right next to the lake to pitch our tent. Nicomen Lake is incredible beautiful, the only problem is the bugs…

We’ve never arrived at a campsite as early as noon before, so we were honestly at a bit of a loss for what to do. It would have been lovely to lie next to the lake all day, but the amount of mosquitoes made it a bit torturous. We had lunch, took a little nap, went for a swim, and played fetch with Alfie. Eventually we decided to go for a little mini hike to explore the area to keep moving to avoid the flies. It was a really lazy afternoon and I got in a fair bit of reading, but by nighttime the campsite had completely changed and gotten very busy. Some of the people from Kicking Horse showed up, along with a huge crowd of others who had hiked the entire 21km that day. 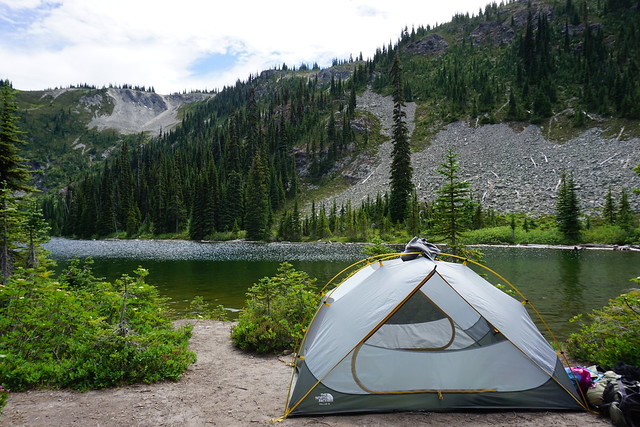 We had supper and then made it a pretty early night. We got hit with a small bit of rain in the evening, but it only lasted about 15-20 minutes and the clouds cleared out again pretty quickly. We had a beautiful view of the lake and I wanted to try my hand at some night photography, so I turned my midnight pee break into a bit of a photo shoot and got some really awesome shots of the stars and the milky way!

We kind of forgot that our last day was going to involve a whopping 17.5km, so we decided to get up really early again because we really had no idea how long it would take and neither of us wanted to be too late getting home on Sunday. We also knew the last day wasn’t going to be scenic (all forest trails), but it was actually a bit of a relief because it was scorching hot on Sunday and the trees provided a nice buffer from the sun. 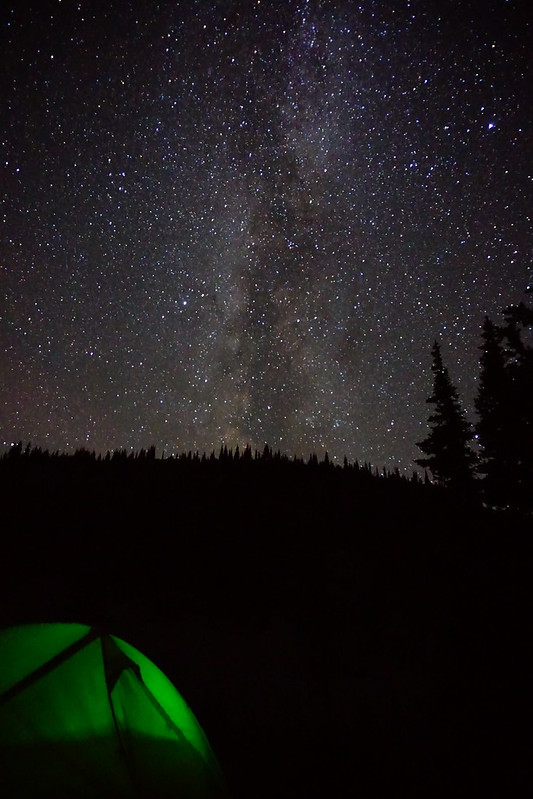 We totally killed the last 17.5km and exited the trail ~5 hours after we left the campsite. The trail out comprises of 2 hiking trails, the Grainger Creek Tail and the Hope Pass Trail. The Grainger Creek Trail was mostly switchbacks (although very gentle ones) that undid most of the elevation we had driven up. It ended at Grainger Creek horse camp, where we stopped for our only break, before rejoining the Hope Pass Trail to Cayuse Flats. The Hope Pass Trail has a lot of history because it was originally used as a wagon trail during the gold rush in the mid 1800’s. So it was a very nice wide trail the rest of the way down.

There was one challenging spot about 100m before the parking lot. There was a pretty high flowing river with two trees down over it that were the only way to cross. I’m not really afraid of heights, but I hate crossing on narrow trees with my backpack, so we had to butt-scootch our way along the tree. The real problem was getting Alfie across. I was worried about letting him go over the tree, so we spent forever trying to find somewhere for him to ford the river, but another guy and his dog eventually caught up with us and his dog had no problem crossing the fallen tree, so I let Alfie go across it too and he totally had no problem. So again, it was just me being a worry wart.

And that pretty much concluded our adventures on the Heather Trail. From the river it was a short walk back to the parking lot. It’s a pain having to drive all the way back into the park to pick up the second car at Blackwell peak (easy way to kill 2 hours). But the trail was just a scenic as expected and I had a great time exploring it!